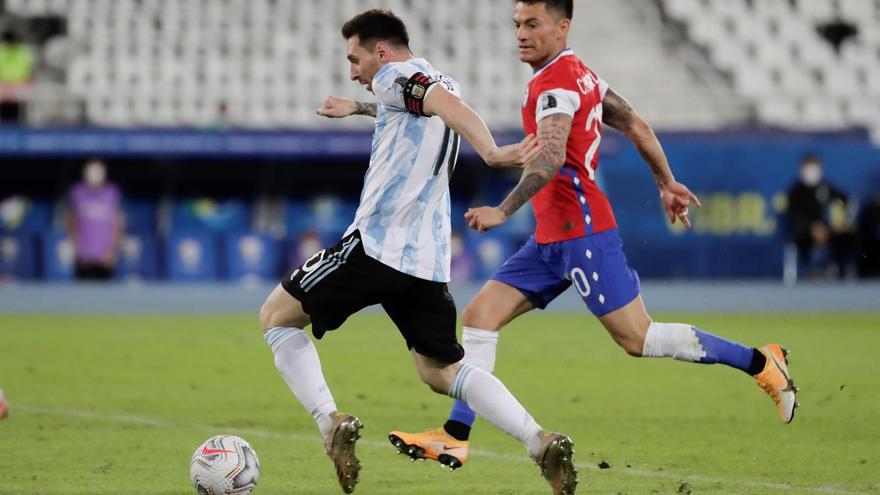 Argentina and Chile equaled 1-1 on Monday in Rio de Janeiro, with goals from Lionel messi and Eduardo Vargas, in the first match of Group A of the America Cup from Brazil. 'La Pulga' scored from a free kick in the 33rd minute and Vargas with a header at 57, after the Albiceleste goalkeeper Emiliano Martínez deflects a penalty from Arturo Vidal. Messi became, with 39 goals, the top scorer for the Argentine team in competition matches (he was already including friendlies) by beating Gabriel Batistuta by one. Of these 39 goals, the Albiceleste captain scored six in World Cups, 23 in World Cup qualifiers and ten in America's Cups. Vargas, for his part, reached 13 goals with La Roja in Copa América matches.

Minutes before the start of the game, the South American Football Confederation (Conmebol) held an audiovisual show in tribute to the Argentine soccer star Diego Maradona, died on November 25, 2020.

Both teams entered the field of play with the intention of taking over the ball and being protagonists and for that reason the first minutes were even and intense. There was also coincidence in the formations chosen by the selectors, who chose to play with four defenders, three midfielders and three forwards.

At 11 minutes, Giovani Lo Celso took his mark off on the left, overflowed and sent a cross that Lautaro Martínez almost transformed into a goal, but the 'Toro' shot was deflected and Argentina could not get ahead on the scoreboard . Chile came close to scoring two minutes later after a bad setback of Argentina on a corner kick, but Nicolás Otamendi reached his own area to avoid the goal. Shortly after, Nicolás González had three clear chances to score, but Claudio Bravo stopped him two shots and a powerful header went over the crossbar.

In the first minutes, Lo Celso overshadowed Messi and was the team's point guard. Justly Lo Celso was fouled near the area, which 'La Pulga' converted into a goal with a precise free kick at 33 minutes. From the goal, Argentina, which went from lowest to highest, raised its level and Chile was very far from the rival goal.

There were no changes at halftime and the same 22 came out to play the second half. At 52 minutes, Vargas was hand in hand against goalkeeper Emiliano Martínez, who managed to deflect the shot, but after the rebound Nicolás Tagliafico gave Vidal a penalty while trying to reject the ball. The Colombian referee Wilmar Roldán, who in the first instance had not indicated the fault, consulted the VAR (video arbitration system) and sanctioned the maximum penalty. At 57, Vidal threw the strong penalty to the right side of the goalkeeper, Martínez flew and touched it, the ball hit the crossbar and Vargas pushed it with his head to make it 1-1. The Chilean goal puzzled the Albiceleste team, which suffered several attacks by rival and had to delay in the field to avoid conceding another goal. Vidal, in the scepter of the field, and Vargas, in the offensive, were gigantic and disturbed the Argentines on several occasions.

Lionel Scaloni sent Ángel Di María and Exequiel Palacios onto the field instead of Lo Celso and Leandro Paredes to try to regain control of the game. Messi, with two shots from medium distance, was the most dangerous of the Argentines and Nicolás Domínguez again missed two clear opportunities. Sergio 'el Kun' Agüero entered at 80 minutes and Argentina was superior in the last moments, but Chile held the attacks and the match ended in a draw.

On the next round, Argentina will face Uruguay and Chile against Bolivia on Friday.

The Albiceleste captain, Lionel Messi, said that Argentina "lacked tranquility" to beat Chile. "We lacked tranquility, when we had an advantage we could not have it, the field did not help much. We lacked control of the ball, played faster, which they did. I don't see the penalty but it changes the game, "said 'la Pulga' to the official broadcast just after the match." I think the penalty play and the draw gave them more peace of mind than us. They started to handle the ball, we couldn't have it and the game got complicated, "said Messi." Today we wanted to start winning, it was important to start with a victory. We play against a very difficult opponent, Uruguay is also going to be complicated, they are two very tough games to start this Copa América and that is why we wanted to start winning, "he added.

Vidal: "Thank God we were able to draw a draw"

Chilean midfielder Arturo Vidal said that the tie leaves them "very calm for what is to come." "We are regulating the intensity, changing the system. Today was a very difficult game, we always tried to keep order. Argentina is a great team, they have very talented players and there is Leo who always changes your schemes. Thank God we were able to serve. a draw that leaves us very calm for what is to come, "said the midfielder to the official broadcast just after the match. "We have to try to attack better, from the outside, and take advantage of the spaces. It was a very intense match, with Argentina they are always very difficult. We know we have to improve and we hope to make a nice Cup," added Vidal.