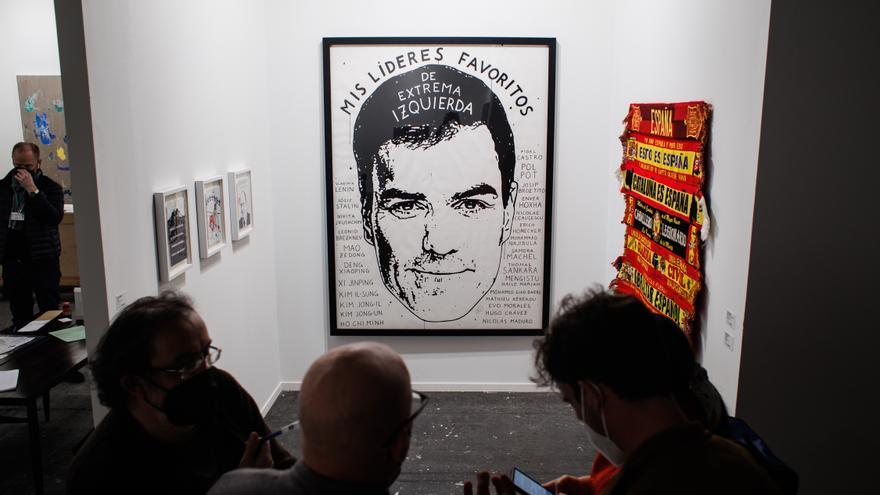 The new edition of BOW will house a work with a drawing of the President of the Government, Pedro Sanchezsurrounded by names of leaders "of the extreme left" such as Lenin, Stalin or Mao Zedongand will also give prominence to a piece with the dictator Franco with a target painted on his face.

In the case of the portrait of Sánchez, it is the work of the Finnish artist -based in Spain for years- Riiko Sakkinen, in the Forsblom gallery, which has already attracted attention in previous editions of the art fair. In fact, he assures in statements to Europa Press that this piece represents "the end of a trilogy" that began with a portrait of the King Emeritus in 2019 and another of Franco in 2020 accompanied by the title 'Franco was not as bad as they say'.

Now, the piece entitled 'My Favorite Leaders of the Far Left' shows the head of a Pedro Sánchez with a slight smile, with names to the right and left: Evo Morales, Hugo Chavez, Pol Pot or Fidel Castro, among others. The price of the work is 16,000 euros.

"This work was created when Sánchez was forming a government and the right threatened that a communist regime was coming. Everyone thought that this government was going to change something, but you see, it is a disappointment because it has not been left-wing enough for me," pointed out by the artist, who compares Spanish politics with "the Lacasitos". "On the outside it has many colors but inside everything is brown," he ironized.

It is not his only piece with political content that he brings to ARCO, since almost a dozen scarves with the flag of Spain --and legends such as 'Caballero legionario' accompanied by an image of Millán Astray-- under the title 'Esto es España'. The price of the work is 14,000 euros and the artist explained that they are scarves "that you can find in stalls at the exit of the Bernabéu: this is realism and the world is shown as it is".

One last piece included in a series of small drawings --'We are all Kings in exile'-- includes the image of the King Emeritus stating that "he is now a fugitive". In addition, he accompanies it with a phrase by the writer Chesterton that the artist himself selected "after searching for phrases on Google about kings in exile." The drawing costs 2,200 euros.

The José de la Mano gallery --which was the media star last year thanks to its 'Guernica' by Ibarrola-- recovers the work of significant Basque artists in this edition and, among them, that of Ramón Bilbao, who in 1975, coinciding with the last ones shot by the Franco regime, began a series of paintings to show this political situation .

One of them is a drawing of Franco's face with a superimposed cross - the price is 12,000 euros -. But there are also the pieces by the same artist from a group of people who were both shot and pardoned - this piece reaches 25,000 euros - and also from ministers or relevant people during the Spanish dictatorship, such as Santiago Carrillo or Cardinal Tarancón --12,000 euros--.

Another of the works that has attracted attention in the previous days is that of the Peruvian artist Winnye Minervawho recorded a surgical operation for a 'partial occlusion' of her vagina and has decided to sell this document together with a large painting for a price of around 15,000 euros.

"I had no connection to my vagina nor did I identify my gender with her, so I did this operation that has covered three quarters of my organ and there is only the orifice for menstruation", explained the artist from Lima in statements to Europa Press, who had initially recorded the intervention --he had a hard time finding a surgeon, as he pointed out-- for “personal record.” The piece is at Ginsberg's stand within the Opening by Allianz section for new creators.

The works that 'lower' the controversy

Two 'enfants terribles' already known at ARCO, Santiago Sierra and Eugenio Merino, also attend this edition. The first repeats with a work on Helga de Alvear --after her controversial 'Political Prisoners'-- and does so with a series of twelve photographs taken from a performance in 2005 in an old palace in Ceacescu. The images that "show the lines of hunger", according to gallery owners, are priced at 11,000 euros each.

For his part, Eugenio Merino signs up at the ADN gallery to reflect on the phenomenon of demolishing statues, with a series of postcards to which the artist has cut out the Columbus monument they contained. He also provides the cast of a hand of an anti-Francoist victim of reprisal who was in jail for three years and a plaque with the legend 'Monument to exploitation'.

A look for two million

The fair also holds surprises beyond the commotion generated by some pieces. For example, the gallery Leandro Navarro recovers the painting 'Entrada de casa', which was already in the first year of the fair, 1982, by the artist María Moreno and which was also acquired by the painter Antonio López, Moreno's husband.

Inigo Navarro He has explained to Europa Press that this work was exhibited by his father 40 years ago and that it has not cost him "convince" to López, although the painting is only for exhibition and not for sale. At the moment, his gallery houses the most expensive piece of the fair, a Miró ('Vol d'oiseaux entoruant le jaune d'un éclair') with a starting price of 2 million euros, although there is also work by Chagall (600,000 euros) or tapies (a 'mattress' for 275,000 euros).