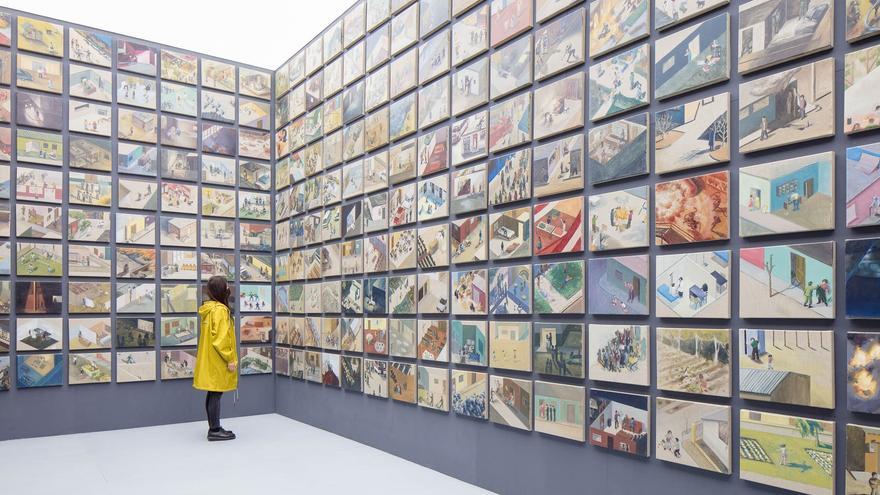 Rome, May 19 (EFE) .- The architecture reflects on coexistence in the future from the current world, marked by social inequalities aggravated by the pandemic, at the XVII Venice Biennale, whose pavilions begin to present their proposals today before of its opening to the public one year later than planned.

This edition of the Biennial, which should have been held in 2020 but was postponed due to the coronavirus, will offer its visitors from this Saturday, between strict security measures and until next November 21, international proposals from some 60 countries and others collateral events.

The prestigious Spanish architect Rafael Moneo will be awarded the Golden Lion for the race, a recognition of his long and fruitful career that he receives, he explained to Efe, with “joy and gratitude.”

The event is curated by the Lebanese architect Hashim Sarkis and will feature some 60 national pavilions, located between the Gardens and the Arsenale -the old Venetian shipyards-, but also in the historic center of the City of Canals.

The island of Grenada, Iraq and Uzbekistan will participate for the first time.

Among the proposals is the project by Spaniards Domingo González, Sofía Piñero, Andrzej Gwizdala and Fernando Herrera who, under the name of “Uncertainty” (“Uncertainty”), reflects with an architecture of social impact, and from different disciplines, on a unknown future and in constant change.

“La casa infinita”, by the Argentine Gerardo Caballero, will address the issue of collective housing to defend the power of the community against individualism, an idea that Chileans Emilio Marín and Rodrigo Sepúlveda also contemplate with “Testimonial spaces”, which focuses their attention in the emblematic town José María Caro.

This neighborhood, located to the south of the city of Santiago, lacked basic services such as electricity in the sixties, but it starred in one of the most recognized social movements in recent years, as the union of residents managed to promote significant development and quick of the area.

Peru, Mexico, Uruguay, Brazil or the Dominican Republic will be other Latin American participants.

Sweden, Finland and Norway will experiment with “What we share”, transforming their joint Nordic countries pavilion into a co-housing project to try to solve some of the social and environmental challenges facing societies. modern.

MONEO, GOLDEN LION ON THE RACE

This international exhibition will also feature collateral events from non-profit organizations and institutions, such as UNESCO, which will present an exhibition called “Relive the spirit of Mosul” on the reconstruction of this emblematic Iraqi city devastated by the occupation of the terrorist group State. Islamic (2014-2017).

On May 22, the Biennial will present the Golden Lion for the race to Rafael Moneo, 1996 Pritzker Prize winner, but on that day the names of the winning pavilions of this edition will not be missed.

“It is a joy because Venice and the Biennial have been very present in my life as an architect and have been received by colleagues whom I admire,” Moneo, 84, the author, among many other emblematic works, of the expansion of the Prado Museum (2007) in Madrid, the Diagonal Building in Barcelona (1993) and the Museums of Modern Art and Architecture in Stockholm, Sweden (1998).

A BIENNIAL IN PANDEMIC

Usually the jury of this international exhibition announces the best proposals on the opening day to the public, on May 22, but the pandemic has forced the organizers to wait until the last moment to decide and that has prevented some pavilions from being prepared. for this week of May.

So that all countries compete on equal terms, the jury will observe the projects a few days before the awards ceremony, which will finally be held on August 30.

The Biennial, after two postponements, will be able to receive an audience, but it will do so under strict security measures: visitors will have to wear the mask at all times, the temperature will be measured and there will be hydroalcoholic gels to sanitize the hands at the entrances.

The pavilions will have a limited capacity inside, to avoid crowds, there will be separate entry and exit routes and online ticket reservations will be mandatory.