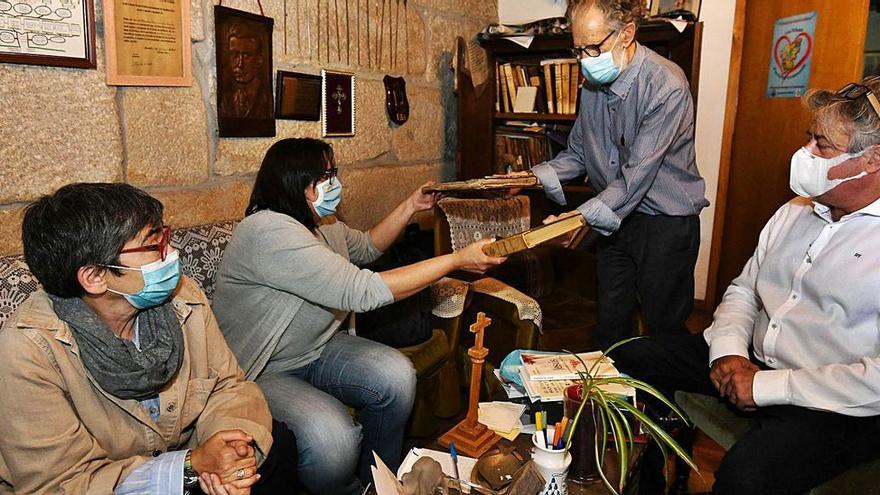 The Cristóbal Colón Galego Association promotes this research plan that has a double track, on the one hand, archaeological studies that focus on identifying possible burials of descendants and, on the other, the tracking of relatives of the admiral in the parish archives. Both officially started yesterday with the first analyzes in the cemetery of San Salvador, in the municipality of Poio.

The technicians carried out the initial work with drones to identify the limits of possible burials and have an exhaustive planimetry of the religious space in which, it is believed, neighbors familiarly linked to the navigator could be buried.

The University of Granada, RTVE, the professor of Forensic Medicine José Antonio Lorente (who heads the international study on the genetic origin of Colón) and Story Producciones recently requested to obtain genetic remains in these burials in the church of Poio. The request, on which the Archbishopric of Santiago will have to decide, has the support of the Cristóbal Colón Galego Association.

It remembers that “the recent legitimation of historical documents by the Institute of Cultural Heritage of Spain (2013), which contain the surnames 'Colón' and 'de Colón', as well as the Capitulations of Santa Fe, could place the family of the navigator in Pontevedra, before and during the discovery”. Archaeological studies precisely seek to help in this line of work, identifying possible burials.

The hope is that archaeological and historical investigations could lead to immediate family members from whom to extract genetic samples. Subsequent analysis of the DNA remains would make a “fundamental argument possible, which would allow to attribute a Galician origin to the admiral”, recalls the Cristóbal Colón Galego Association.

The geneticist José Antonio Lorente (who almost 20 years ago headed the multidisciplinary team that exhumed the tomb of Columbus located in the cathedral of Seville and extracted part of the remains) would also be in charge of taking the samples in the church of San Salvador de Poio, once the Archdiocese gives approval to the investigation.

On the other hand, the historians and experts Pilar Rodríguez and Mercedes Vázquez Bertomeu, specialists in Paleography and at the head of the Dehistoria company, lead the other line of work, focused for the first time on the female branch of Colón.

And it is that the investigations have focused up to this moment in the male descendants who carried the surname of the navigator, without taking into account the numerous women, also hypothetical relatives, who after their marriages lost their surname "and that they are also Columbus, like the children they had”, They remember from the Cristóbal Colón Galego Association.

In this line of crawl There are also male relatives who in the same period, in the 15th and 16th centuries, also lost their surname, in this case due to marriages with women of greater social and economic position.. Both in this case and in that of the female descendants, the objective is to identify the trace of the Colón family.

Pilar Rodríguez explains to FARO that “we are looking for the descendants of the Colón family in Pontevedra”, for which an analysis will be made of the books of two parishes, those of San Bartolomé in Boa Vila and of San Salvador in Poio. "The study involves both the male and female part," he recalls, "But we are finding that there will surely be more possibilities to find more in the female branch", although in them the surname has already been diluted.

"What is certain is that we have evidence of a Columbus in 1519", indicates the specialist in allusion to Juan Colón, of whom there is evidence that at the beginning of the 16th century he added land to the Poio monastery. "That Juan Colón is from Pontevedra, he is located, possibly he had descendants, which is what we are trying to find out, and quite possibly his last name was lost, for example if he only had daughters. But the fact that the surname has been lost does not mean that there are no descendants of the Colón de Pontevedra ”.

The researchers met yesterday with the Archpriest of O Lérez, Vicente Cerdeiriña, to consult the parish books and advance in the historical study.

The work plan of the Colón Galego Association will continue in the coming weeks with new studies in the San Salvador cemetery made using georadar. The Ourense and Vigo campuses of the University of Vigo will collaborate in this new phase.