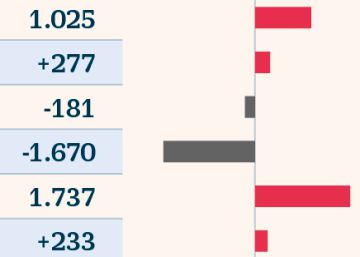 IAG, ArcerlorMittal, Cellnex and Telefónica have led the debt declines in homogeneous terms during the first six months of the year, with falls of 1,670, 1,173, 868 and 844 million respectively. The strong generation of free cash and divestments justify the declines experienced by IAG and Telefónica while the case of Cellnex is the capital increase of 1,200 million which contributes to the fall in liabilities.

Despite these strong reductions and without taking into account the entry into force of the IFRS 16 accounting standard on financial leases, compared to the end of 2018, all Ibex companies have increased their indebtedness by 735 million euros during the first half of the year, up to 164,023 million euros. In annual terms, the debt reduction is limited to 1.3%, some 2,234 million euros.

On January 1, the new accounting standard on leases began to be applied, which requires operating rents such as real estate to be included in the balance sheet. The regulatory change translates into an increase in assets as well as debt. According to the data provided by the companies, regarding the closing of December 31, the increase in debt is close to 15,000 million. However, not all companies detail in their accounts the impact of IFRS16. If the comparison is made with the data of the first half of last year, the increase in debt exceeds 12,000 million. Together with Telefónica and its 7,542 million extra liabilities from leases, the other companies most affected by the regulations were Repsol (7,464 million), Meliá (1,237.3 million), Grifols (683 million) and Iberdrola (399 million).

Beyond the changes in accounting aimed at raising transparency, the data shows that those listed are no longer in a hurry from previous years to be deleveraged.

After closing 2018 with the lowest level of debt since 2005, companies are no longer forced to undertake heavy divestitures to accelerate debt cuts. Of course, after the injuries left by the financial crisis of 2008, companies are aware of the importance of fiscal discipline.

Even so, at the close of June 30, 12 listed lowered their debt, compared to 15 that raised it. Among the companies that increased debt the most, Iberdrola stands out with 1,737 million more in its liabilities. If the IFRS 16 effect valued at 399 million is included, the increase in debt reaches 2,136 million. The company that presides over Ignacio Galán explains in the semiannual report that the increase in liabilities in the first six months of this year is also explained by the exchange rate (284 million) and the investment process in which the electricity company is immersed.

It is followed by Endesa (1,025 million), MásMóvil (983 million) and ACS (728 million). The construction company headed by Florentino Pérez has gone from having a net cash position of three million euros to a debt of 725 million at the end of June 30. The company justifies this change in the purchase of Abertis and in the investment of concession projects and renewable energy.

In year-on-year terms, the largest debt reductions were paid by Telefónica (3,363 million), IAG (1,653 million), ArcerlorMittal (1,331 million) and Enagás (772 million). Although the airline is forced to include in its balance the rent of the airplanes, it is more lax than the one that had been applied so far. This translates into a financial leverage drop.