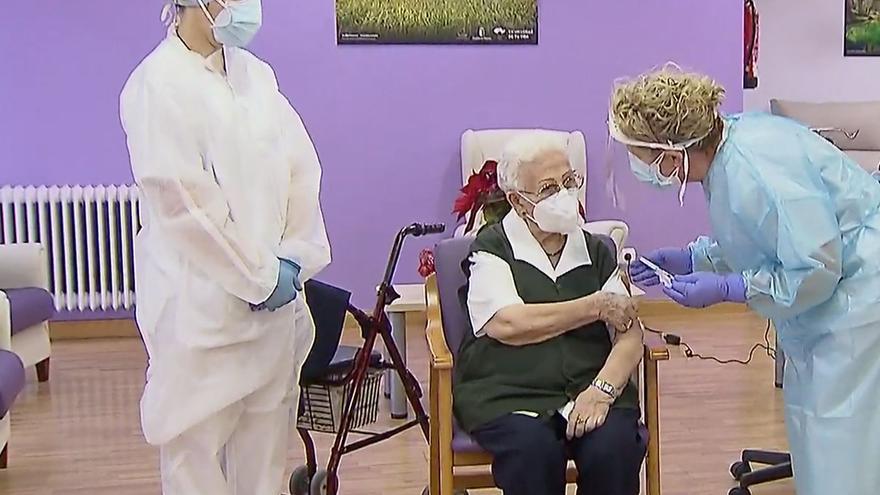 Spain today has taken a historic step with the first injections of the COVID-19 vaccine. It was in ‘Los Olmos’, a public nursing home in Guadalajara, where Araceli, the 96-year-old inmate, and Mónica Tapias, the youngest worker, received at 9 a.m. on Sunday a dose of the Pfizer / BioNTech serum. They have been the first protagonists of a vaccination campaign whose initial phase aims to cover 2.3 million people in the next 12 weeks.

As promised by Health and the Junta de Castilla-La Mancha, today was a discreet act with no greater media presence than the live signal offered by TVE. Araceli and Mónica’s initial nervousness has disappeared five minutes after having inoculated the serum, at which time both have been “proud” and have wanted to make an appeal. “I encourage the population to get vaccinated because it is very important, it is the only way to overcome this,” said the nursing assistant, who has reminded those who “have not arrived in time to do so.” “We have to stop the virus,” shared Araceli. “That is why I have done it.”

‘Los Olmos’ is one of the few public centers for the elderly in the community and has 70 inmates, 120 employees and currently no positive cases. However, 13 people died at the residence in the first wave according to official data from April 30. The health crisis has been especially bloody with the more than 5,000 nursing homes in our country, where 20,268 people lost their lives.

The first vaccine has arrived in our country in record time after a nine-month wait, which, however, has seemed too long, especially in these vulnerable areas, where positive cases are still being recorded today.