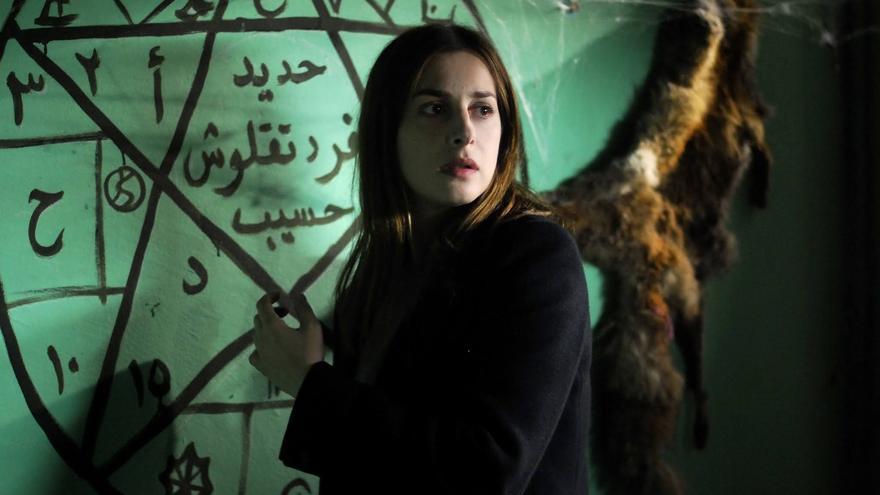 “I was very surprised that no one made fantasy horror movies in Egypt, and I ended up wondering, ‘why not be the first?'” These statements by Egyptian director Marwan Hamed (born 1977) help us frame the sense of Arabian ghosts, special section included in the XXXVI edition of the Mostra de València-Cinema del Mediterrani, which takes place between 15 and 24 October. Hamed’s third feature film, The Blue Elephant (2014), paranormal intrigue based on a best-seller local of the writer Ahmed Mourad, is part of Arab specters along with four other fantastic titles produced over the last decade in the Maghreb. All of them, practically unpublished in our country, show the incipient exercise in that region of a cinematographic genre that, according to the artistic director of the Mostra, Eduardo Guillot, “raises important reflections on the identity and the political and social situation of each country”.

Accompany The Blue Elephant in this section of the contest its sequel, The Blue Elephant 2: Dark Whispers (2019), also directed by Marwan Hamed and starring Karim Abdel Aziz as a therapist who is as chaotic in his personal life as he is effective in solving unexplained psychiatric ailments; Warda (2014), the work of another Egyptian filmmaker, Hadi El Bagoury, which appeals to found footage to count a devilish possession; Kandisha (2008), in which the screenwriter and director Jérôme Cohen-Olivar offers a refreshing look at a terrifying figure of Moroccan folklore; and Dachra (2018), a surprising mixture by the Tunisian Abdelhamid Bouchnak of witchcraft, wicked children and cannibalism that had its international debut in the Critics’ Week at the Venice Film Festival.

Now, what are we talking about when we talk about fantastic Arabic? The five films programmed by the Mostra de València show, in fact, plot peculiarities typical of the countries in which they have been produced. But, at the same time, its generic codification as terror, wonder and suspense responds point by point to what we understand in the West as fantastic cinema. This immediate recognition of a certain language of the fantastic by French, American or Spanish spectators forces us to ask ourselves about the fantastic tradition of Arab audiovisuals and, if it exists, about the imbrication in it of current films produced in Tunisia, Egypt or Morocco. like the ones exhibited this year at the Mostra.

The truth is that, as the author and the author of this article pointed out in the last chapter of Supernovae: A Feminist History of Audiovisual Science Fiction, the fantastic literature that emerged in the Arab world between the 9th and 11th centuries articulated the utopian, the supernatural and the proto-scientific in the key of moral fables aligned with the precepts of the Koran. It is not possible to speak of fantasy as we understand it in the West, where the genre acquires a full card of nature as a reaction to the victory between the 18th and 19th centuries of the Enlightenment in the European and North American socio-cultural settings. It is symptomatic that it is after the Second World War, when historical circumstances force a dialectic with the West more intense than that established during the colonizations of the region, when fantasy and science fiction have had the opportunity to flourish in the Maghreb with traits that drink of our modernity.

As detailed by Jesús PalaciosIn any case, the literary field has been more conducive to the local expression of this fantastic tinged with influences than the audiovisual, subject to notable industrial, geostrategic and religious constraints. Until recent years, only curiosities such as Egyptian productions had escaped from them. Anyab (1981) —replica of The Rocky Horror Picture Show (1975) – and Al Ens Wa Al Jinn (1985). For this reason, the filmmakers who, like Marwan Hamed, have wondered about the absence of fantasy in the cinematographies of their native countries, were actually missing the manifestations of the genre produced by Hollywood, Great Britain, France, Japan and, in In recent years, Netflix, HBO Max, Hulu and other online content platforms, the latest mutation of the audiovisual globalization that we are going through.

The interesting thing is how, when trying to make up in the industry of their respective countries the absence of that fantastic cinema with which they are familiar by their cosmopolitan and well-off upbringing —the director of Warda, for example, he is the son of the well-known Egyptian television producer Gameel El Bagoury and nephew of the film star Zizi El Badrawy—, the resulting films are of course assimilable by international audiences, but always with respect for traditions and concepts that these new directors they longed to see them reflected on the screen from contemporary perspectives.

It is not, therefore, about local, cryptic or radical films, but about proposals open to intergenerational, political and cultural dialogue. Thus, Yehia Rashed, the leading psychiatrist of The Blue Elephant and The Blue Elephant 2: Dark Whispers, is far from being an exemplary father and professional, and among his interlocutors are enthusiasts of the power of social networks to broaden their sentimental and professional horizons, and women who rebel against the stigma of mental illness with which society pretends to land on enigmatic events of which they have been protagonists.

On Warda, the mysterious ailments that a young woman begins to suffer after the death of her father are related through the camera that her older brother always carries with him, an aspiring filmmaker who returns home after residing for a few years in the Netherlands. Also the three protagonists of the Tunisian Dachra they are film students, whom their teacher encourages to discover horizons for the image beyond the social: “Last year the students presented me with twenty projects about our revolution of 2011 and all twenty seemed the same.” For its part, Kandisha bet on your last minutes so queer and for making the vengeful spirit that gives the film its title an armed wing of feminism. Along these lines, it should be remembered that Morocco is experiencing a social earthquake these days due to the election in three of the most relevant cities of the country —Casablanca, Marrakech and Rabat— of mayors belonging to various political formations.

The modernity of the films programmed at the Mostra transcends the unprejudiced approach to issues that are still uncomfortable for the most conservative sectors of the portrayed societies. Its forms have been adapted without complexes to the lingua franca of today’s transnational audiovisual, including cinematic references. Warda conforms largely to the Egyptian version of the famous Paranormal Activity (2007). Dachra is a debtor to extreme horror popular during the first decade of the 21st century, and also honors classics such as Psychosis (1960) and Shadow threat (1973). The main lawyer of Kandisha evokes Clarice Starling (Jodie Foster) from The silence of the lambs (1991) in his appearance, his character and his visits to disturbing subjects, one of them embodied by the American actor David Carradine. And refering to The Blue Elephant and its continuation, they also resort to foreign names, in this case technical, in order to achieve that their action scenes and special effects shine at the height of what their directors and the public are used to seeing in foreign horror productions.

All of this causes us to experience an unexpected sensation of closeness when faced with the most idiosyncratic elements of these fictions: the djinn or malicious spirits that possess human beings, the Shaykh al-Islam whose erudition encompasses all the orthodox and heterodox aspects of knowledge, the lengthy funeral rites and the dream scenes loaded with a disconcerting symbolism, they stop representing radically different cultures and mentalities to speak to us psychological and sociological concerns not very different from those that assail us in other latitudes. Attend the Mostra de València screenings of Arab specters The viewer will not be faced with so much an immersion in ancient or exotic imaginaries as something much more fruitful: debates around the meaning of near and far in a world flattened by the surface of the screens. In the words of the director of Kandisha, Jérôme Cohen-Olivar, who has extended his career in the fantastic with The 16th Episode (2018), focused on three youtubers eager for subscribers who find what they deserve in a demonic Casablanca, “Morocco has its own ghosts but the fear they generate is universal, as are YouTube users.”