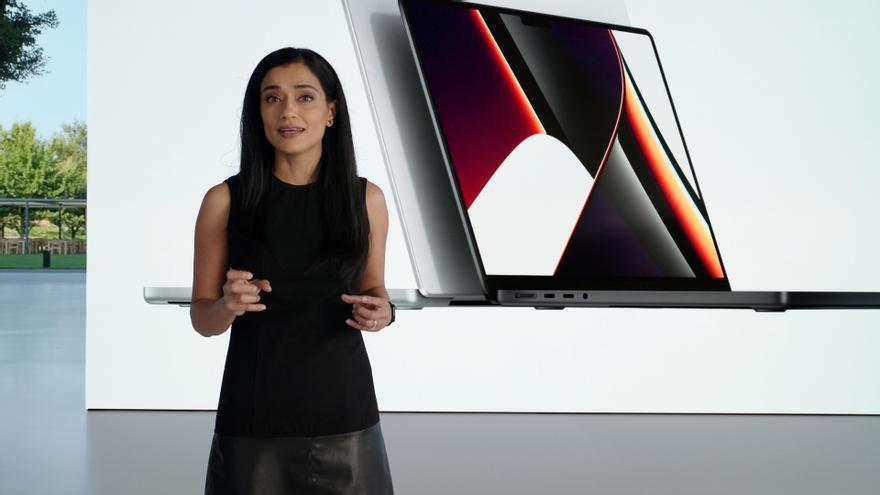 Manzana has presented this Monday its novelties in its family of MacBook Pro laptops, with two new 14 and 16-inch models with a ‘notch’ design for the ‘webcam’, as well as the selfie camera on their iPhone, and which come equipped with the two new own chips of the company, M1 Pro and M1 Max, its first versions for professional laptops.

The American company has held its online event ‘Unleashed’, the second in less than a month after the presentation of the iPhone 13 family, which this time focused on the music and on their Mac computers.

Along with its new chips, Apple has introduced its new MacBook Pro professional laptops, with a 16-inch and a 14-inch model, which it has described as “the most powerful laptops“That it has manufactured so far, according to its CEO, Tim Cook.

The new MacBook Pro makes use of a new aluminum sleeve and a thermal system that can move up to 50 percent more air than traditional systems, within a design with 16.8 mm profile and 4.7 pounds of weight on the 16-inch model, thinner and lighter on the 14-inch .

The new MacBook Pros discard the touch bar from previous models and go back to the physical keys at the top. Connectivity has been enhanced with HDMI, Thunderbolt 4 on one side, and a ‘jack’ port, two USB Thunderbolt ports, and the return of MagSafe, its magnetic charging system. With the use of an adapter you can connect up to three monitors and headphones at the same time.

The computers reduce their edges by 24 percent to 3.5 mm on the side, and up to 60 percent on the top with the use of a square ‘notch’ to house the webcam in the center, which copies the distinctive element of the selfie camera of the last generations of iPhone.

The 16-inch model has 1.8 million more pixels on its screen, reaching 7.7 million, while the 14-inch model stays at 5.9 million pixels. Both models have 120 hertz refresh rate, which automatically adapts according to content to save battery life.

The panel for the first time is of the Liquid Retina XDR type, with high dynamic range functions and up to one billion colors. This screen is made up of billions of mini LEDs, with up to 1,000 nits on average, reaching a maximum of 1,600 nits.

Presentation of the new Macbook. EFE

The new camera system of the device stands out for improving the webcam to 1080p resolution, with an improvement of up to double the performance and function noise reduction by machine learning.

Its microphones also improve, with up to 60 percent less noise when recording, as well as a system with six speakers, with two ‘tweeters’ for the bass and two ‘woofers’ to improve the bass by 80 percent. It has support for Doldy Atmos and spatial sound.

The functions of M1 Max quadruple memory capacity, which in the case of video was 16GB in previous models, and that goes up to 64GB of unified memory, with up to 30 simultaneous high-resolution video tracks. It can also handle transfers of up to 7.4GB per second on its SSD memory.

The new MacBook Pro’s battery improves too. The 14-inch model reaches up to 17 hours of video playback (7 hours more), 21 hours on the 16-inch model. Add fast charging, which allows you to get 50 percent of the charge in 30 minutes.

Presentation of the new Macbook. EFE

Apple launched its first own chip for Mac a year ago, Apple M1, as part of its commitment to using its chips instead of Intel’s, and now it has presented its first professional processor, M1 Pro, specially designed for your MacBook Pro laptops.

M1 Pro opts for a design in which the CPU and GPU do not work separately, but rather they integrate, using a unified board design that can achieve up to 200GB per second and with support for 32GB of unified memory.

Apple’s new chip has 33.7 billion transistors, with a five-nanometer architecture, and implements a CPU improvement of up to 70 percent, which can double in graphics performance. M1 Pro uses up to 16 dedicated cores for neural processing.

Apple has also presented another variant, M1 Max, a chip that doubles the memory interface and reaches a bandwidth of 400 GB per second, with 64GB unified memory and 57 billion transistors.

M1 Max is the “most powerful chip” designed by Apple, with up to 32 GPU cores that improve graphics performance up to four times it, with an industry-leading performance per watt, according to the company, that improves performance by 1.7 times with the same energy power.

Instead of adding a discrete graphics card, M1 Max improves graphics performance with a 70 percent lower energy consumption. To do this, it uses 40 percent less energy, which reduces overheating and noise, and uses 100W less energy, being also 2.5 times faster than other notebooks connected to the current.

Using M1 Max is geared towards features such as code compilation or video editing, and it manages to move files between CPU and GPU without making copies. The operation of machine learning is on average 3 times faster, and in some cases it reaches up to 20 times.

The chips are equipped with native Apple security functions such as the secure enclave, and also have improvements for the company’s native professional apps, such as Final Cut, Rosetta and Adobe Premiere, all of them universal apps, among a catalog of 10,000 programs. .