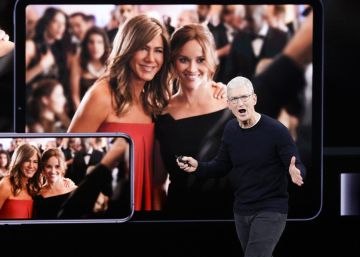 After the 2018 iPhone never reached the expected sales levels and forced Apple to make unprecedented movements in its recent history, the company was required to present a convincing reaction. Thus came the climax of today's presentation of Apple in San Francisco, which Tim Cook addressed defending those terminals before giving way to his successors. In the first place, the iPhone 11, which takes the witness of the XR model, inherits its 6.1-inch LCD screen, adds new colors on its exterior of aluminum and gains a double camera on its back. Thanks to a second ultra wide-angle lens, the new iPhone allows you to reframe and change the perspective after taking the picture. In addition, it also gains a night mode, in the image and likeness of the Google Pixel and other Android terminals that in the last two years have displaced the iPhone from the first places in the quality tests of mobile phone cameras.

To help change the direction in sales, Apple lowers the starting price of its iPhone 11 (which starts at $ 699, compared to the $ 749 that the iPhone XR cost at launch). With this, the technology giant partially corrects the general price increase that meant its range of mobile phones presented now a year ago. Next, Apple introduced the top 2019 models, which for the first time carry the Pro tag.

Video games and series, for 5 dollars a month

After the traditional initial video, Tim Cook had started the presentation promising great news from hardware, software and services. And so he began to give details of the Apple Arcade video game service, which recovers the spirit of the gaming machines of the 1980s and updates that style by offering a catalog of games (available on all their devices), for a monthly fee of $ 5: a kind of Netflix of video games, which will be available next Thursday, September 19. But to compete directly with the leader of the streamingApple prepares its own catalog of movies and series, which will be distributed through its own Apple TV + service, which will begin its deployment in the US on November 1 at a price of also $ 5 per month.

As for the iPad, Cook celebrated the maturity of his tablet, justifying the need to make his operating system (now called iPadOS) independent of the iPhone's iOS to provide him with new multitasking functions, moving gestures and integration with his own pencil. Greg Joswiak demonstrated those new features of iPadOS 13, with which Apple is positioning its tablet as a true alternative to the laptop, while presenting the renewal of the most basic iPad. Available as of today at the same price as its predecessor ($ 329) it expands its screen from 9.7 to 10.2 inches and doubles the power of its processor

The "always on" screen comes to the Apple Watch

Emphasizing the functions to monitor the health of its users, Apple also introduced its new Apple Watch series 5. With the fifth generation, Apple finally achieves the most anticipated function for its * smartwatch *: the screen is not black most of the time. The new screen will always be on thanks to LPTO technology, without needing to have to move and raise the wrist. Compass and new safety features, along with new materials: gray titanium and white ceramic. The price of the new generation starts at $ 399 and will be available from today, and the range completes it with a more affordable model (series 3, presented now two years ago).