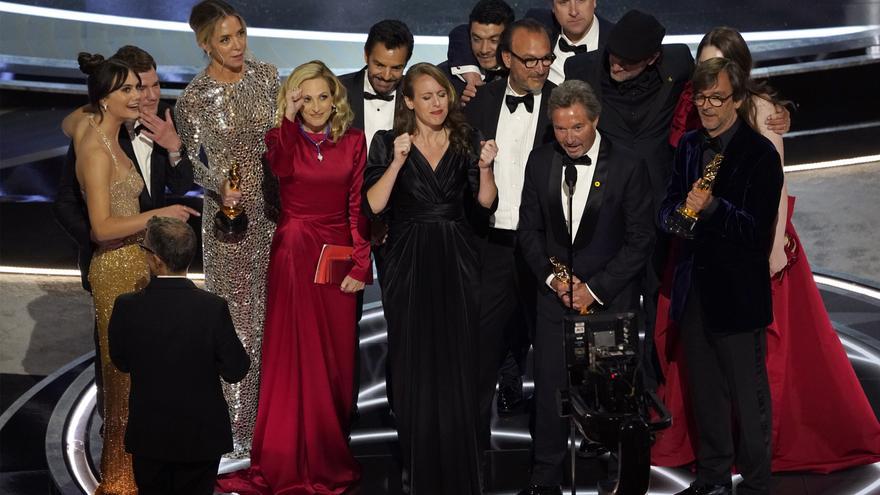 On this year's oscars Much more was at stake than the statuette for Best Film. Perhaps the future of the industry was at stake, which in two years and fueled by the pandemic has seen its foundations shake. The movie theaters have been left for the blockbusters What spider-man or batman, while adult cinema does not work on the big screen and seems condemned to the platforms. In this new framework, in the uncertainty of what will happen in the future, the award for Best Film means much more than a simple award, but a declaration of intent.

Therefore the victory of coda has many more reads. show again how the vote favors the consensus optionsor to the detriment of the most authorial. Coda is a happy and luminous film in dark times. It is a film that speaks of diversity and inclusion. Optimistic messages that the cinema wants to send to people. The Academy also sends a message. In the platform war, the one that will define the future of entertainment and cinema, they prefer Apple to Netflix. Apple has won the Oscar for Best Picture in its first attempt. It has not even been with his auroral bet, the Coen's Macbeth, but for an acquisition of the Sundance festival made in January 2021, yes, the most expensive in film history. A remake of a French film with which they have beaten Steven Spielberg, Paul Thomas Anderson and, most importantly, Netflix.

Apple has known how to read better than its competitor at the moment and has opted for its most popular movie. The company's campaign has been devoted solely to the Sian Heder film. When one entered an Apple store in the US, the actors from the film appeared on all the devices. He hasn't needed to go to a class A festival. He hasn't needed to win dozens of critics' awards. He has only touched the necessary keys.

Apple's arrival in the industry has been seen with better eyes than Netflix's, which entered like an elephant in a china shop. Ted Sarandos's platform has confronted theaters since the 2017 Cannes Film Festival, when he presented Okja and The Meyerowitz stories in the official section and provoked a boycott of French theaters. Exhibitors got Cannes to change its rules. If they wanted to win the Palme d'Or, they had to commit to being released in French theaters. Netflix did not accept, and since then its position in the industry has been seen as a threat. Apple has not lived like this, which from the first moment said that some of its premieres would be for theaters, as it seems that the new Martin Scorsese will be.

In the offices of Netflix, the same question will have been asked during the Oscar gala as in recent years, "what the hell do we have to do to win the award for Best Picture?" It is not just a question of ego, it is also a commercial question to convince that they not only produce content like churros that are quickly forgotten, but also masterpieces so that moviegoers pay the fee every month and do not leave. For people, that certification is given by the Oscar for Best Film, not the Golden Lion of Venice.

His strategy to win the prize was clear: great authors with risky films. It started with Roma, by Alfonso Cuarón, which despite being the best film of the year by far lost to a lesser film like Green Book. It was no accident. The platform underwent a negotiation with the cinemas, which refused to show it since they asked for more time of exclusivity in theaters. Only a few accepted and the industry positioned itself. Steven Spielberg himself said that a Netflix movie could not win the Oscar without going through theaters. If Spielberg talks, Hollywood listens, and Netflix was left without an award.

The big bet would be the following year. Scorsese made a masterpiece that summed up all of his cinema. The Irishman is the typical film with everything in favor to win at the Oscars. A great director, an epic mafia story and a cast of legends. That year a phenomenon like Parasites crossed his path, with which the Academy sent another message, that of an open and international institution that for the first time rewarded a film not spoken in English.

Not even the pandemic changed the Oscars' hatred of Netflix. At the 2021 Oscars, the films of the year of COVID were awarded, in which none or almost none had been released in theaters. It was the year in which platforms saved productions and people by offering culture and entertainment. Even so, Netflix did not win the Oscar with two works by two established directors such as David Fincher and Aaron Sorkin. Chloé Zhao won with Nomadland, an independent, small and risky film that spoke of the society of the moment.

This year the entire run of The Power of the Dog has been perfect. Prize in Venice, triumph in all the critics' awards, in the BAFTAs and in the Critics Choice. They had also built the perfect story, that of Jane Campion's return after more than ten years without directing. As if that were not enough, they had again The best movie of the year. Its rivals that had been released in theaters, West Side Story and Belfast, fell by the wayside. It seemed that the planets were aligned. The last stumbling block in Netflix's obsession with the Oscar, nobody saw it coming and it was Apple. Coda's victory is the umpteenth trip from the Academy to the platform. It will be necessary to see if they change their editorial line in order to win the award or if they accept that, at the moment, the industry smiles to work with them but then never votes for them on their Oscar ballots.

Each year that passes the fight will be fiercer. Next year it will be Apple who takes Scorsese, while Netflix will repeat with Fincher and Noah Baumbach. The rooms will try to resurrect and prevent the Oscar from going, for the second year, to a platform. The future of cinema is also at stake in the awards.