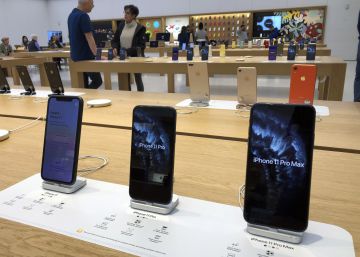 Manzana on Tuesday it presented record results in the final quarter of 2019 with solid gains thanks to sales of the iPhone. The net profit reached the record of 22,000 million dollars (about 20,000 million euros). Revenue soared to 91.8 billion dollars (more than 83 billion euros), a figure also for a quarter. With these results, Cupertino’s firm exceeded analyst expectations.

“We are delighted to report the highest quarterly volume of revenue from Apple, driven by strong demand for our iPhone 11 and iPhone 11 Pro, and an absolute record in wearable products and services,” said company CEO Tim Cook .

These results come when the company tries to diversify due to the slowdown in the smartphone market, with increasing competition. Apple now seeks to grow in the sale of services such as music and television on line and other digital content. After the results were published, the shares of the apple company rose more than 2.8% on Wall Street.

The value of the company’s stock has doubled compared to a year ago, with a stock value that exceeds 1.3 billion dollars. This increase is explained by the expansion towards digital content services, web payments and technologies such as AirPods and the Apple Watch.

Apple has stopped reporting the number of iPhones it sells, but revenues for these products rose 8% in the quarter, to 55.9 billion dollars (more than 50,000 million euros).

Service revenues increased 17% over the same period last year, which is attributed to the launch of Apple TV + and a new credit card. The television service in streaming Apple TV + is offered in a hundred countries at $ 4.99 (4.5 euros) per month; A lower price than rivals like Netflix.