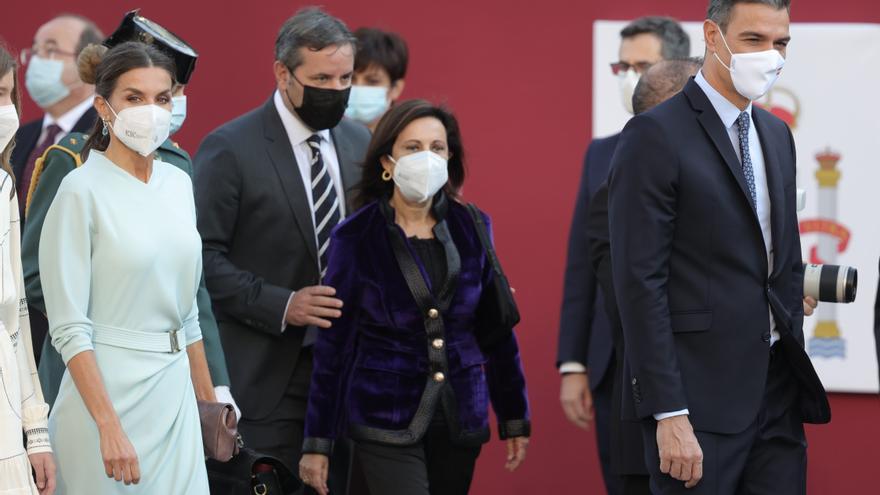 With the return of the military parade on October 12, the whistles and boos to President Pedro Sánchez and the rest of his ministers have also returned. This military act that runs along the Paseo de la Castellana has resumed a little decaffeinated after last year it was limited to a small military parade at the Royal Palace, due to the sanitary restrictions imposed by the consequences of the pandemic.

“Out, out” and “Sánchez resignation”, in addition to constant beeps and a series of insults, have become the most repeated shouts since the presence of the leader of the Executive has been announced by the public address system. The arrival of Sánchez has been coordinated with that of the kings, Felipe VI and Letizia, received with an ovation by the followers who have come to witness the military procession that has traveled Madrid both by land and by air.

Dressed in the colors of the national flag, hundreds of attendees have gathered since early in the morning to follow the parade. Although the Ministry of Defense has recovered the act, this edition has been shorter than those organized before Covid-19 broke into our country. On this occasion, 2,656 soldiers, 68 aircraft and 115 vehicles participated, according to data collected by Europa Press.

The event began with the entry by official car of the Chief Executive at 10.33 am. Before greeting the kings, Sánchez shared a brief talk with the Minister of Defense, Margarita Robles; the president of the Community of Madrid, Isabel Díaz Ayuso, and the mayor of the capital, José Luis Martínez Almeida. As has become customary since he has been in charge of the Government, when his name has been mentioned over the loudspeakers, some attendees have begun to whistle, boo, yell and insult. These incidents have been repeated when the president has left the event. The works around the Santiago Bernabéu stadium have caused that in that area, near the authorities’ stand, there were no assistants and the whistles were heard from a greater distance.

Castells and Maroto have not attended the event

Almost the entire government has been present at the parade. The Socialist and United Podemos ministers attended the event, with the exception of the Minister of Industry and the Minister of Universities, Reyes Maroto and Manuel Castells. Despite the fact that the University team confirmed the minister’s attendance and it was thus programmed in his agenda, the event was late, they have assured that he was not in the Castellana rostrum due to “health issues.”

This is the first military parade on October 12 with the presence of the ministers of the confederal group, which asked the opposition to suppress it. Last year they already attended the event organized on this same date by Defense and the Royal Household led by Pablo Iglesias and this was the first time they attended the military event. The second vice president of the Government, Yolanda Díaz, has shown her “respect and gratitude” to the Armed Forces, through her Twitter account. “A new country advances: one that protects, is plural and looks to the future,” he added.

The former second vice president and former minister of Social Rights and Agenda 2030, Pablo Iglesias, has reacted on his personal Twitter account to the beeps received by his former colleagues in the Council of Ministers. The former secretary general of Podemos considers that “the applause to the Head of State and the boos of the Government”, heard during the October 12 parade that commemorates the conquest of America, “only expresses a truism”, that “the monarchy is a political symbol of the right and the extreme right. Nobody else, “said the former leader of Podemos. “An institution that only generates adhesion in that part of the country, has a very compromised future,” he concluded.

Although the number of attendees has been reduced, the regional leaders have also been invited to the event. Despite the habitual absences of the presidents of Catalonia and Euskadi, in this edition, neither the Galician leader, Alberto Núñez Feijóo, who has the debate on the state of the Region the next day, nor the Castilian-Manchego, Emiliano García Page, who has a trip to Brussels.

One of the first events scheduled in the parade has been the parachute jump over the Plaza de Lima carrying the flag of Spain. In this edition, the acrobatics has been followed in detail – and much applauded – after the incident that occurred two years ago when a paratrooper from the Almogáraves Brigade collided with a lamppost while making the landing maneuvers. The military parade has adapted to the pandemic and members of the Armed Forces have walked the Paseo de la Castellana wearing a mask.

The Ministry of Defense wants to take advantage of this act to value the work that the members of the Armed Forces have done in the last two years. During the harshest months of the pandemic, different detachments worked to disinfect nursing homes, carried out tracking tasks and supported the construction of temporary hospitals. In recent months, there have also been soldiers working to alleviate the consequences of the storm Filomena, the eruption of the volcano on La Palma and rescuing Afghan collaborators after the United States’ withdrawal from the country.