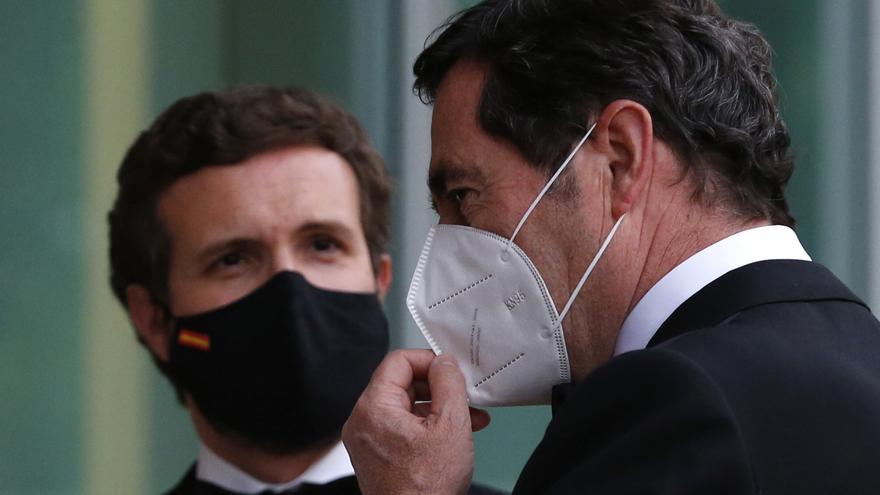 The distancing between the leader of the Popular Party, Pablo Casado, and the business organizations, due to the approval of many of these to the pardons to the independence prisoners granted by the Government last week, has been staged this Thursday in an act in which The president of the popular and the top head of the CEOE, Antonio Garamendi, in Madrid have coincided.

Distrust between the two grew in recent days after Garamendi stated that, if the pardons to the Catalan independentistas served to normalize the situation, “welcome” they were. His words did not mean by any means an explicit support for those pardons, as Garamendi himself has since made an effort to clarify in each of his public appearances. But they did stand very far from the apocalyptic messages of the three right-wing -PP, Vox and Ciudadanos-, which consider pardons as a kind of affront to the rule of law.

The leadership of the PP therefore felt betrayed by what until now it considered to be one of its main related sectors, and therefore decided to declare war on the bosses. Casado went on to argue that the businessmen who support pardons for the independence leaders “do not represent anyone” and are “a subsidized audience.

This Thursday Garamendi tried to calm the waters against Casado. “We will always defend companies, entrepreneurs and the self-employed, with a sense of the State. I always say that the sense of the State is to love our country, which is called Spain. We defend the Constitution, the rule of law, the law, the rule of law and the parliamentary monarchy. We always say it, but I think we have to keep saying it, “he concluded.

Garamendi seeks an approach to the PP

Next, the CEOE leader defended his “line of collaboration” with the Government based on article 7 of the Constitution, which declares entrepreneurs “social agents.” Finally he addressed Casado directly: “Tell the president of the PP that he can count on our collaboration and participation. He knows that we always have an attitude and a very important line of trust. We will continue to have it, as always.”

Casado did not pick up the glove and limited himself to thanking Garamendi for his “work in favor of businessmen.” And then he harshly attacked the pardons and explained why, according to him, the businessmen should also be against it.

The leader of the PP assured that his party is committed “to legal certainty, which is that the company is not expropriated from a businessman, even if the Soviet of the Government of the day considers that their activity is harmful.” “Legal certainty is also complying with the law and just as a businessman cannot change his tax system without going through Congress, a Spaniard cannot change his country without going through Congress,” he stressed.

“And just as a businessman has to pay the fine if there is a negative Treasury inspection and he is not pardoned, a criminal who has given a coup to the State in his own country is not pardoned against the sentencing court and Against 12 reports from the Prosecutor’s Office and the logic that he has not repented or complied with the Constitution, “he added. In his opinion, “this is a legal certainty that investors take into account”, because “if an investor sees that the law is not being complied with in Spain, the risk of his investment is probably much greater”.

For Casado, “any legal or legal arbitrariness is listed on the stock market.” And he added that the “political decisions” of the Government “to remain in power also affect employers, the self-employed, workers and employment.”