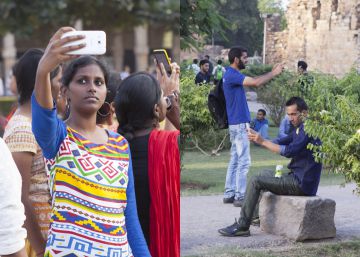 "We are saturated with images." By cleaning his hard drives, photographer Matías Uris (Puertollano, 1981) realized the overwhelming amount of personal and professional photographs that he stored and probably would not use again. "We all keep them, but they do not help us," he says over the phone. So he decided to give them an outlet, in part, in the form of a photobook and, incidentally, invite different reflections, arising after grouping by topics so much material. Uris, who as a professional does mostly fashion work and also travel, collaborator of different brands and publications, including The weekly country, he has self-published his first solo photobook, Toshiva. A publication of which the first thing that draws attention is its shape, which imitates a hard drive, with its black covers, and contains 275 photos in postal size. All packaged in a white box, with the description in several languages ​​of what it contains, as if it were a real hard drive.

Uris has ordered the book in series, from his selfies, or those he did that reflect mass tourism, famous … He recognizes that he has been one of those infected by the "obsessive consumption of images, fostered by a culture of using And throw". There are also in Toshiva Portraits of young people posing looking for their best appearance. "We sell our image in networks that is not real, it's all very false, we want to look like the celebrities because we think they are better than us. It's ridiculous. "That cult for the image" is horrible in the case of children. "Uris recalls his experience, a year ago," in a small town in Malawi where girls, when you photographed them, knew how take out hip and throw the shoulder forward ".

As for the name of the photobook, it is a game by the Japanese electronics company and Shiva, the god of destruction in Hinduism. Thus, by erasing and reviewing his photos, Uris points out questions such as "cultural property today is in limbo, especially through social networks, which have brought saturation and impersonality." They provide us with so much information that in the end the brain gets almost nothing " It is what qualifies as "digital junk".

Precisely with social networks, which he uses for his profession, he is very critical, especially Instagram, to which users upload photos and videos. "Years ago I used to enter daily, until it started to reject me, today I only use it professionally because spending long hours gazing at photos generates feelings that I do not like, it is a network in which you see an accumulation of vanity and self-centeredness. trompe l'oeil that you create in your house ".

In this line, the anxiety for having I like it in our network publications and remember what Susan Sontag augured in About photography more than 40 years ago "She used to say that a capitalist society is based on images and today we are deeply involved in it, and also that there would be a genre that qualified as 'the dictatorship of the interesting', just like the likes from today".

He, who started in the trade a decade ago in a self-taught way, believes that "this madness" of the image in which he lives "begins to change, young people are more oriented to make videos and stories", ephemeral audiovisual contents, that last 24 hours.

A trend that gives him ideas for his next project, a new photobook in which he will delve into "the issue of digital garbage and the need for an environmentalism of photography, not to consume so much, not to produce so much, to clean of the photos we make. "