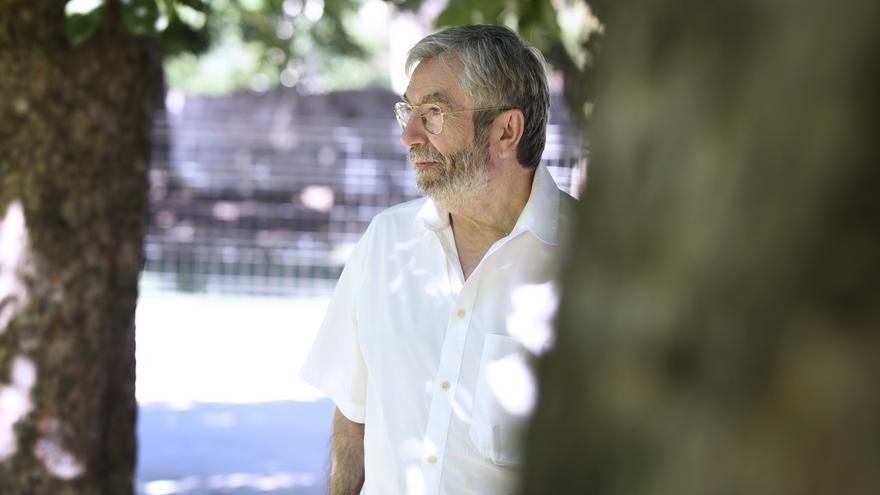 From his green balcony, glass of wine in hand and an attentive look at the quietism of Madrid, the writer Antonio Muñoz Molina (Úbeda, 1956) spent the hours of urgent and obligatory confinement. It was between observing and pointing, when he (re) visited his roots and memories; kindred and land, grandparents and grandchildren, olive grove and orchard. Back to where (Seix Barral, 2021) is a diary of the closing ceremony, which at the same time breathes fresh air from bygone times. It is like a botanical garden of scenes from a life, like an avalanche of political thoughts, and despite the regrets, of trust in the common, and in defense of the public.

We are in the Eugenio Trías Library, located inside the Retiro Park, in Madrid, is this your main library?

It is a much loved library. I live nearby and I come in many occasions to look for books and movies, they have a good background and great light. I read the newspaper and sometimes I do a little work.

Why did you want to write about your family, about your roots and the fields of Úbeda? Does seclusion have to do with it?

As the present was emptied, memories assailed me. It is also accentuated by having grandchildren or seeing loved ones grow older and suddenly, due to confinement, spending a long time without seeing them. So the memories had a special force during those days.

We read in his book: "I have memories that seem older than my own life: crews of men mowing or digging since dawn or the hissing of sickles cut through the air." How has coming from a family of farm workers marked you?

Being born into a working-class family has totally determined my way of being in the world. I was a politically aware teenager, with a very strong anti-Franco concern. The world that I knew as a child was so backward that it seems that the memories are of centuries before my own life. I grew up in a time where there were no agricultural machinery and working people had neither rights nor comforts. In my personal memory is the arrival of running water at home. When I started studying and going to university I had the feeling of being an intruder, because people like me and my family weren't supposed to be there. Many times I don't know what world I belong to.

Her mother told her that she lived in the farmhouse where her parents served, and when a chicken had a bad face, her grandmother would tell the lady, and the lady: "Well, nothing, you eat it so it doesn't go to waste" .

All those stories make me have a very powerful class consciousness.

It is possible that, as your family comes from the hard work in the fields, you focus on the book about cases like that of Eleazar Blandón, who at age 42 died working in the orchards of Murcia due to heat stroke. It happened on August 4, 2020, not 60 years ago ...

I have a strong feeling of justice. It seems that I talk about the harshness of working in the fields in the past, and suddenly, I read that news in the newspaper and it moves me, like a knock. It may seem that the exploitation of workers and weaker people, as well as inhuman work are things of yesterday ... and suddenly you open the newspaper and they continue to mark the present.

His parents learned to read late in the 1980s.

I was already over 30 years old and I lived it with great pride.

His father gave him for his saint, at the age of 15, a typewriter.

He believed that typing was a very big advantage over the field. Also, he wanted to reward me because that summer I was going to spend the whole time working in the garden. I was already reading and writing a lot at the time.

On very hot mornings when the figs ripened, his father left him in command with a cowbell and the mission to go out from time to time shaking it and shouting to scare away the birds.

(Serie). Yes, it was very small there. I have worked a lot on the land; from beating olive trees, picking olives and even digging. When we were children we acted as granilleros: we went on our knees picking up the olives that had fallen out of the blankets. This is not forgotten, in fact, I wrote The wind of the moon, which has a lot to do with what I tell you, in New York. The remoteness accentuated my memories, and, it happens to many emigrants, when they are surrounded by a foreign world, the memory of their own awakens.

Is Spain a country of ignorant people?

No, the reading rates are not much lower than in the rest of the countries. What we do have are great deficiencies and inequalities in the educational system. I am interested in the public system, which is on which the health of the democratic system depends. The public school is very short of means and with too high ratios. But I also say that in this country there are very readers, and what I have observed for years is that the average of the readers is more insightful than the average of the supposedly cultivated groups. There are many working-class readers who are highly qualified to judge books.

Do you believe in the social elevator?

I don't like the idea of ​​the social elevator, since it seems that some go up and others stay down. We would have to create a world, regardless of people's origin and gender, in which anyone could develop their abilities to the fullest. This is achieved with good public services, social justice and decent access to housing.

A beautiful and painful scene is when her elderly mother cannot climb to the upper floors of the house, and her sister records the rooms above so that her mother can see them.

As I write: old age is a slow retreat, an absentminded departure from places you will not return to. Life is gradual withdrawals, suddenly the floor above your house is an unknown and inaccessible country. What we can ask is that our elders are assisted and have someone to accompany them. But that's life, a continuum of things that are the last time we are going to do.

In his confinement diary he says: "March 14. Now we realize all the things that seemed necessary and urgent and suddenly become unimportant; and we realize at the same time which ones really matter. public healthcare". Have we forgotten?

We have to remember that and do everything possible so that it is not forgotten. The neoliberal fantasies of the privatizations of the health care system, which had permeated a lot due to the amount of interest, have been shown to be a lie and do not work. To deal with all this, we have needed a public system with highly qualified personnel and with a scientific and industrial background. And suddenly we discover that we do not manufacture masks or syringes ... A fair democratic system needs a good public health system. And for that a fair tax system: without fraud and those who have more pay more.

One image it brings is that of the army entering the residences and finding the corpses of the elderly who had been dead for several days in their beds. Some in the same room as living patients.

Oh my gosh. Commissions of inquiry must be required to find out exactly what happened.

He dedicates the book to Elvira Lindo, his wife of 30 years. Does it have much of it what you believe? Would Muñoz Molina write and think differently without her?

When one finishes a book it is only the beginning of something because a correction process begins. She is the first person to read me. If Elvira doesn't approve what I write, I won't publish it. She has taught me a lot, she has made me aware of details and privileges that as a man I had not realized. When we started to be together I was a well-known writer and she had a solid career in television. I saw how supposedly cultured people ignored her and patronized her. When he started posting Manolito Gafotas there were intellectuals who underestimated her. I have witnessed the efforts that Elvira has had to make because she is a woman to show that she is the same as a man, and to overcome stereotypes. She has educated me in equality.

He lived confined to reading the first volume of Hitler's biography, written by Volker Ullrich.

How someone so mediocre can feed so much anger and conquer an entire country. I am struck by the character seen by his contemporaries. I quote from Klaus Mann who saw him one day in a pastry shop in Munich and his uncle was gorging himself on cakes. In addition, Hitler had a lot of halitosis and as time went on it got worse and worse. Or the detail that he always carried peanuts and gave them to the squirrels. I am interested in these kinds of minutiae because they help to understand the depth of human beings.