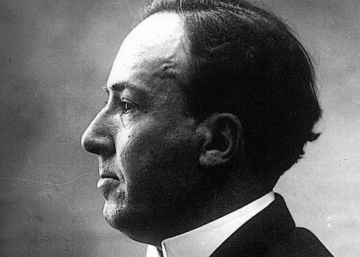 It is obvious that Antonio Machado It was unique. Even so, certain days, it looked quite like the others. That Friday, January 11, 1929, for example, he must feel a very common frustration. He still rested in Madrid, but the return to everyday life already made him bitter. “I begin the letter that I will send, alas, in Segovia on Sunday. Because my vacation ends without remedy ”, he lamented. Like anyone, even today. But, starting this year, readers can share much more than the feelings of the poet: they have as a gift their complete work.

The author of Castile Fields Y Solitude He died in Colliure, in France, in 1939. So, 80 years later, his writings are already free of copyright, as established by law. At the same time, the National Library (BNE) offers from today, on-line, practically all its production. Manuscripts, covers, first editions and dozens of documents to read and download. In that tide, they also navigate the four pages that complete that melancholic missive of 1929, addressed to Pilar de Valderrama. “Goodbye queen and my glory, the heart of your poet, immense for you – and only for you – accompanies you”, The author writes to his beloved.

The BNE has actually published a list with 180 other authors that go into the public domain. “There are artists from all Autonomous Communities, unknown or forgotten, that are worth recovering,” said Ana Santos, director of the institution, which for four years has been collecting rights-free creators in January. Although she herself is aware that a colossus like Machado would shade even other giants of literature. “Rare is the Spanish house where there is no work of his,” sums up Manuel Álvarez Machado, grandson of the poet’s grandson, honorary president of his foundation and one of the heirs of his legacy.

Now, in addition to acquiring them, anyone can publish or dispose of their texts as they wish. There are only two limits: moral law and authorship. The liberation may arouse a renewed editorial interest, although both Cegal (the confederation of booksellers) and the Federation of Publishers’ Guilds point out that the arrival in the public domain does not usually have a significant impact on sales or publications. In any case, Alberto Sánchez, president of Cegal, believes that there should be no bookstore in Spain that does not offer work by Machado. The one he runs, Taiga, in Toledo, yesterday had three or four copies.

Apart from greater dissemination, Manuel Ñúñez Encabo, president of the Antonio Machado Spanish Foundation (FAM), expresses another hope: “What does not exist and is necessary is a deepening of his work. It represents an example of democracy and a cultural, poetic, social and political lesson. There are some publications on Machado of enormous superficiality. It is perhaps the poet most cited by politicians, but also the most deformed. ”

Maybe it’s the fate of any genius. Many want to get hold of him. The risk, now offered to all, may even increase. But Álvarez Machado expects to grow, rather, the research work on the author. The truth is that the catalog is already immense: a search in the ISBN index (which records the published books) returns about 200 published Machado titles, in addition to another 550 on it. And the influx of recent exposure about him and his brother in Seville and Madrid it demonstrates its validity.

It is often said that the master of the Generation of 98 shares with García Lorca the best known Spanish poet’s throne. His nephew grandson offers a fact: “Four decades ago, in the kiosks, a collection of classics came out. Machado’s work appeared at number 16. It sold 1.6 million copies. ” And Núñez Encabo adds that he is the only Spanish recognized as “universal poet and of humanity” by Unesco.

Both seem to consider the release of rights as good news. The nephew grandson does not care much about the family losing a source of income: in the absence of children, Antonio Machado He left everything to his brothers. Only two had heirs: their rights ended up distributed among those six girls, nieces of the poet. And, today, among their children, including Álvarez Machado. “If I had concentrated everything on one person, I could have lived off it. And good. But it has always been very distributed, ”he clarifies.

After all, that is precisely the spirit that the law seeks: a balance between the protection of the author and his environment and the greatest possible dissemination of culture. In fact, after the reform of the Intellectual Property Law in 1987, works in Spain go into the public domain 70 years after the death of its creator, beginning on January 1. For those killed before that regulatory change, Like Machado, you have to wait 80 years. And a discrepancy: several experts argue that rights are released the day eight decades are completed; others interpret what to expect on January 1. For Machado, nor there is doubt: both dates have passed. It belongs to everyone.