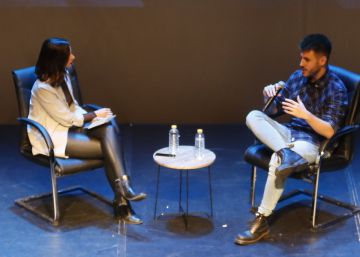 Four years ago he won the television contest The voice and since then he has published five albums. With them, Antonio José has achieved four platinum and two gold records, among other awards. Now is presenting Antidote, which went on sale last Friday, with a title that refers to the role that the artist gives to music in his life. "It's what I need every day in my life," he confessed to Laura Piñero. The SER journalist interviewed the artist at the Luchana Theaters in Madrid as part of the meetings that THE COUNTRY organize within the EL PAÍS + program, addressed to the readers of the newspaper.

“Since childhood I have been taught the value of music. There is nothing in the world that is capable of connecting heaven and earth as she does, ”explained the musician. Antonio José (Palma del Río, Córdoba, 24 years old) won the program with only 10 years Junior Eurovision, supported by his family and convinced that, in one way or another, his life would be linked to music. Since that contest until The voice He was "living" and knocking on record doors and halls, finding out if he wanted to enter the industry or keep his passion for privacy. "Little by little I was believing in myself and the last push, once again, was hit by my mother."

Thanks to some artists who "clothed" him from his beginnings, such as Vanesa Martín or Antonio Orozco, he made the leap with his first album, Trip. He considers that his second album served him to start thinking who he wanted to be in music and the third made him an artist. Now in Antidote It has finished growing. This work has taken him to "necessary" extremes to see how far he was able to go. "Sometimes for fear we limit ourselves and that does not let us move forward in life and this album has freed me from these fears," he said. The support to overcome these fears has been found in his family and friends.

The risk he assumed has resulted in sounds little present in his previous works, such as the intense urban and Latin touches. "A roller coaster", as described by the artist, on which any listener can be mounted regardless of origin or age. Part of this texture has been collected in the trips that Antonio José has made for its production. The album has been recorded in different cities, such as Los Angeles, Bogotá or Miami, for the artist's desire to leave his comfort zone and try other producers and flavors.

Goodbye, go at once Y Close the door they are some of the subjects that the disc includes and of which the singer spoke. Although the one he got excited about was Andalusia. The musician, who has been traveling these four years, reflected on the need not to lose the roots or the reference about the place you occupy in your home.

When asked by the public, he delved into this idea by stating that he advised his future self to never forget where it came from. In addition to responding to some readers, he approached to greet a follower with whom he had previously spoken on Twitter. And he replied to a message from the mother of the girl in this social network in which he rebuked her for believing that Antonio José would answer her messages.