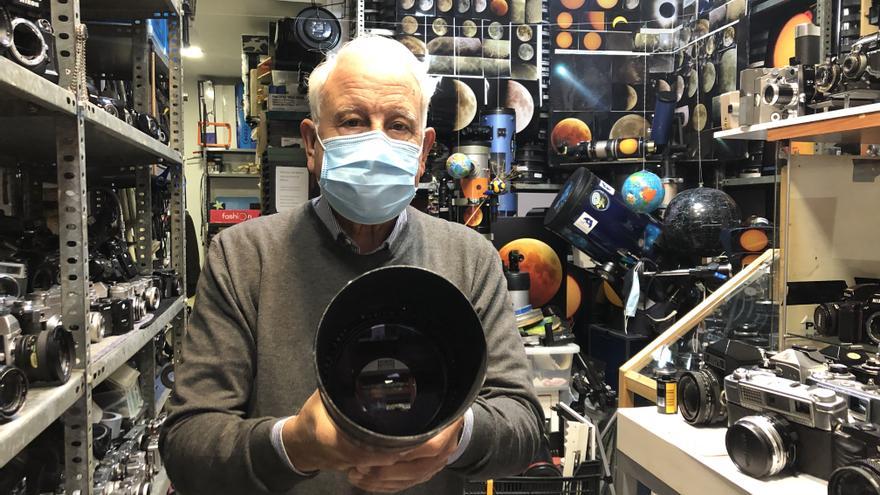 “Fixing cameras is over. Now I just want to look at the sky.” Antonio del Solar retires. They are more than 40 years dedicated to photography. 73 since he was born in Sidi Ifni, when it was a Spanish colony in Africa. Much time devoted to others having their machines ready to tell us the world. Now, before leaving to dedicate himself exclusively to astrophotography, his passion, liquidates the old analog gadgets with which he made a living.

Antonio had put up posters in the window of his store at Calle de Fernández de los Ríos, 29, in Madrid’s Chamberí neighborhood, announcing that he was selling cameras, lenses, binoculars, spyglasses, projectors, video cameras and other gadgets from the analog world for retirement. . On Tuesday, via Twitter, everything started to get out of control. The viral effect worked and on Wednesday morning, before opening, there was already a discreet queue of people waiting in the street to peek into the small workshop that will close its doors very soon.

“What is happening is incredible. Things of this new world”, Antonio commented to us, among customers, curious and phone calls … and although he sells everything, when I ask him for the price of a beautiful Nikon F with the edges worn by the use tells me: “Ah, no, I do not sell that, it is my camera, the best SLR, a marvel”. He also doesn’t want me to go anywhere near a Kodak Retina from the 1950s… “cool, made in Germany with Schneider lenses. Not for sale.” Yes, he proudly shows me a large telephoto lens and assures that it is the same model that Hitchcock used in the filming of Rear window.

The great Miguel de la Quadra-Salcedo was one of his unique clients: “When you went to the Quetzal Route, you had to set up strings of batteries so that they could photograph for days in the jungle.” The cameras of Barriopedro, the Efe agency reporter, author of the iconic image of Tejero during the 23F coup, also passed through his hands.

“They were other times, there were some cameras that were especially complicated to repair, I remember the Cannon A1, very difficult to disassemble. But others were much harder, they hardly broke down, like the Nikon F1 or the Canon Ftb. Now phones have finished with everything. But they have neither the definition nor the magic of analog photography. ”

As soon as it is settled, Antonio will leave with his F1 and his telescopes to continue looking at the sky, he has been photographing solar flares for years. But he confesses that where he still finds the best opportunities to see the Moon and follow the stars is in Teruel, the Cuenca mountains or the north of Guadalajara, three of the few dark paradises that still remain in Spain.