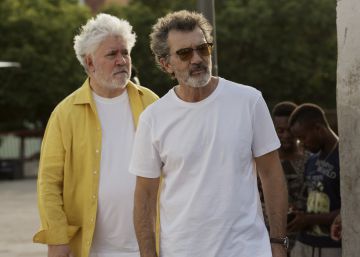 Antonio Banderas He has received the nomination for best actor for Oscar awards for his role as Salvador Mallo in Pain and glory, directed by Pedro Almodóvar. This is the first time that Malaga aspires to win an award from the Hollywood Academy. Until now, he had been nominated five times in the Golden Globes, but never in the Oscars.

With this nomination, Antonio Banderas becomes the second Spanish actor who chooses the award for best Oscar actor. The first was Javier Bardem, for his roles in Before Night Falls (2000) and Beautiful (2010). Although he did not win the Oscar for these films, Bardem did receive the Oscar for best supporting actor for No country for old men (2007).

Pedro Almodóvar, who was in London, on a scale of his Los Angeles-Madrid flight, celebrated the election of one of his fetish actors: “Antonio has been part of my filmography and my life for more than 30 years, that getting his first nomination for this film fills me with pride. “

Banderas will compete in the category of best actor with Leonardo DiCaprio, protagonist of Once upon a time in … Hollywood; Joaquin Phoenix, protagonist of Joker and winner of the best actor award in the Golden Globes; Adam Driver, from History of a marriage; and Jonathan Pryce, from The two potatoes

“The interpretative ribbon is very high and I thank with all my heart the opportunity to be in this Oscar race. Congratulate also Pedro Almodovar and to the whole team of Pain and glory for the nomination in the category of best foreign film that demonstrates the great work they have done, “said Banderas in a statement sent to the media.

The interpretation in Pain and glory is holding Antonio Banderas A season of success. The actor has received at least six awards, including some as notable as the best actor at the Cannes Film Festival or the best actor of the European Film Academy. They are joined by several awards from American critics (Los Angeles, New York and the National Association) and the Forqué award, which he received last weekend. He has also been nominated for the Golden Globes – where Joaquin Phoenix finally prevailed – and is among the favorites for the Goya, which are celebrated on January 25.