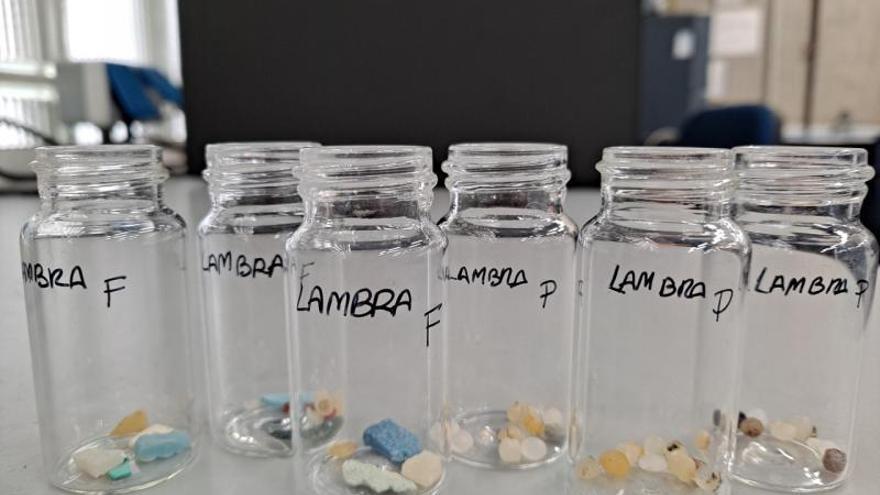 Antibiotics and other drugs found in microplastics dumped into the sea

“The problem with microplastics is that due to their small size they can be ingested by marine organisms and block their airways, but in addition, it has been discovered that plastics can also absorb many pollutants. The first thing we did was a bibliographic review and we saw that all the works that focused on the absorption of pollutants on microplastics dealt with priority pollutants, which are the best known -hydrocarbons, polychlorinated biphenyls …-, but none on emerging pollutants “, he pointed Sergio Santana, principal investigator of the project in which they also work Sarah Montesdeoca, Maria Esther Torres, Zoraida Sosa and Jose Juan Santana.

Specialists in Environmental Chemical Analysis have designed an analytical procedure for the extraction and determination of widely used pharmaceutical compounds that are absorbed in microplastics. This method has been successfully tested on microplastic remains found on three beaches in the Canary Islands, and the results have already been published in the international environmental science journal Chemosphere.

“This is a preliminary work of the Implamac project led by the University of La Laguna, and what we have done is to optimize the methodology to be able to analyze these plastics. The objective is to check the presence of pharmaceutical compounds, sun creams and hormones. This would be the first of the articles that corresponds to the optimization of the methodology for drugs, we have already sent a second article in relation to sunscreens, and we are working on that of hormones ”, pointed out the researchers Sergio Santana and Sarah Montesdeoca .

Although in this case only samples from three beaches in Lanzarote and La Graciosa were analyzed to verify the validity of the method, they found, in addition to caffeine and nicotine, ten pharmaceutical compounds, among which they stand out for their frequency of detection, the antibiotic trimethoprim and the anti-convulsant carbamazepine, as well as antineoplastic drugs used in the treatment of cancer.

“We have carried out the methodology capable of extracting the contaminants from microplastics and then, with the help of the research group Ecophysiology of Marine Organisms (Eomar) of the Ecoaqua University Institute, which provided us with the microplastic samples collected from three beaches, we applied it to them and, indeed, we discovered that these microplastics are capable of absorbing these pollutants, “said Santana.

The methodology used was extraction by ultrasound, followed by its determination by ultra-high-performance liquid chromatography with tandem mass spectrometry (Uhplc-MS / MS). Once validated, they will apply it in the Implamac project, lasting two years and financed with funds from the Interreg V Spain-Portugal Territorial Cooperation Program, in which around twenty beaches in each archipelago of the region will be sampled. Macaronesia region.

Specifically, the study of emerging pollutants absorbed by microplastics opens up a field of research of great environmental interest since they are very persistent pollutants and although they are discharged at low concentrations, their entry into the environment is constant.

According to Sergio Santana, the gateway for these emerging pollutants to the marine environment, like microplastics, is usually the wastewater treatment plants (WWTP). “In principle, the main source of entry for these emerging pollutants are treatment plants, but they can also be the main sources of entry for microplastics, which can be formed from a bag that degrades over time, for example, but also from direct way. According to many authors, it is believed that one of the main sources is washing machines, because the clothes we use are quite synthetic, and the fibers and others come out through the purifiers, even some cosmetics for exfoliating contain microplastics ”, the researcher stressed.

The Implamac project, funded in the last call of the European MAC Program 2014-2020 and led by the ULL, aims to develop a monitoring program for microplastics and different pollutants in the sands and waters of the beaches of the four archipelagos of Macaronesia – Canary Islands, Cape Verde, Madeira and Azores-, which highlights the degree of existing pollution and its evolution. In addition, studies will be carried out on the incidence of microplastics in some types of fish and their effect on food chains and ecosystems.

The study also contemplates contributing to the improvement of public knowledge on the matter of plastic pollution, including the awareness of the population, carrying out important dissemination, training and environmental education actions on the marine areas of the four archipelagos.

The research group directed by José Juan Santana Rodríguez, of Environmental Chemical Analysis of the Institute of Environmental Studies and Natural Resources (Iunat) of the University of Las Palmas de Gran Canaria, is one of the most specialized at an international level in the study of pollutants emerging. In the photo above, the researchers that make up the aforementioned group – Sergio Santana and Sarah Montesdeoca standing, to the left – and below, samples of the microplastics found on three beaches in Lanzarote and La Graciosa and analyzed by Iunat scientists. |