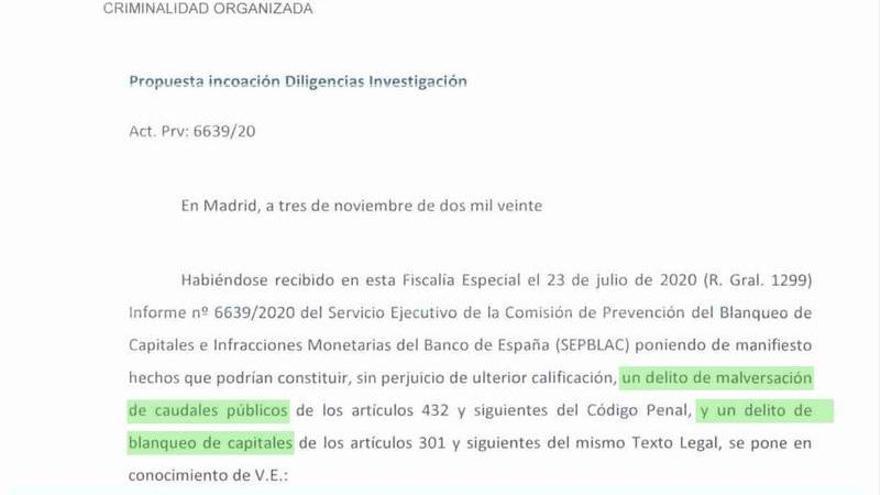 The Anti-Corruption Prosecutor's Office began its investigation of the mask case, appreciating a possible crime of money laundering and another of embezzlement of public funds, the latter attributable only to officials or authorities. The complaint that 17 months later the Anti-Corruption Prosecutor presented in court rules out embezzlement, maintains money laundering and adds document falsification, attributable only to the commission agents Luis Medina and Alberto Luceño, for which it rules out the participation of charges from the Madrid City Council in criminal acts.

The initial Anticorruption criterion is contained in the proposal to initiate proceedings signed by the prosecutor Conrado Sáiz on November 3, 2020, as well as in the decree for their opening, which bears the signature of the chief prosecutor Alejandro Luzón and is dated 16 days later. Anticorruption was based on the "facts" that the Bank of Spain's Prevention Service against Money Laundering (Sepblac) had presented three months earlier. This provisional accusation for embezzlement, as stated in the summary, was maintained at least until the citations of both in March 2021.

The content of the Sepblac report is kept secret and is not part of the legal case opened in a court in Madrid. According to tax sources, it always occurs due to the need to keep the identity of the Sepblac officials who sign said reports secret. Article 46 of the Money Laundering Prevention Law establishes that Sepblac reports "may not be incorporated directly into judicial or administrative proceedings," the aforementioned sources point out.

Despite the secrecy that weighs on the Sepblac report, the first Anticorruption document allows us to intuit it. The document that opens the summary of the Court number 47 of Madrid, whose content has transpired in recent days, is the proposal to initiate proceedings by the prosecutor Conrado Sáiz. It consists of seven pages with a brief but detailed summary of the facts reported by Sepblac and the provisional conclusions signed by prosecutor Sáiz.

The prosecutor describes the emergency procedure by which the contracts for the masks, gloves and tests were awarded, in what quantity and for what price, 11.9 million dollars. In that first Anticorruption document, it is not mentioned how the commission agents arrived at the City Council – in the complaint from the beginning of April, the fame of Luis Medina and his “friendship with a relative” of the mayor was alluded to – but the amount of the commissions they received, 5 million euros in the case of Luceño and one million for Luis Medina. Sepblac had gathered from the banks of the two investigated the necessary documentation to gather the evidence against them.

Sepblac was already suspicious of the documents with which both had tried to justify such high bank income. "To justify the funds credited to their accounts, they delivered to their respective banking entities several documents with the appearance of being models of the International Chamber of Commerce organization based in Paris," the prosecutor wrote in November 2020. However, it has not yet been included. the possible crime of forgery of documents that is included in the complaint after 17 months of investigation.

In that period of almost a year and a half of investigation and in the change of criteria of the Prosecutor's Office, the statement of the only person who testified as a witness stands out, Elena Collado, a senior official of the Madrid City Council, responsible for the purchases of sanitary material in those first weeks of the pandemic and trusted person of the mayor, José Luis Martínez-Almeida. Collado declared in March 2021 and in April those under investigation, Luceño and Medina, did so. The testimony of the position of trust of José Luis Martínez-Almeida had to be fundamental to exempt the Consistory from any responsibility. Collado will testify again as a witness, before the judge instructing the case, on May 8.

The prosecutor who proposed the Anti-Corruption investigation did not later participate in it. The chief prosecutor, Alejandro Luzón, decided to hand over the investigative proceedings to Luis Rodríguez Sol. The explanation offered by Anti-Corruption is that Sáiz is one of the prosecutors in charge of receiving the dozens of reports from Sepblac that arrive annually at the specialized Prosecutor's Office, analyzing them and proposing the opening of investigation proceedings if he considers that the facts described by Anti-Money Laundering are indications of the crimes that are the competence of Anticorruption.

From there, the Luzon Chief Prosecutor decides who handles each case. Or if he assumes it in person, as happened with the investigation proceedings into alleged corruption in the case of the mask contract granted by the Community of Madrid to a friend of Isabel Díaz Ayuso, and from which the president's brother obtained a commission .