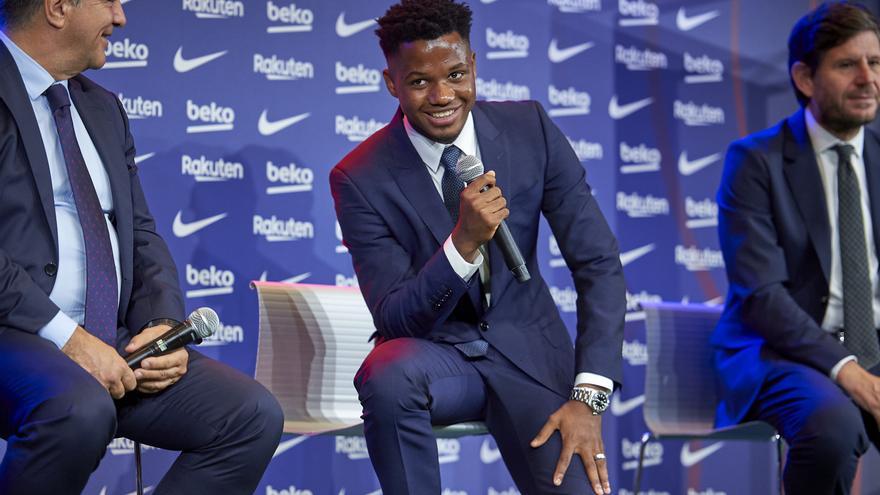 Renovated until 2027 and a clause of 1,000 million euros. Star conditions, symbol. And the 10 on the back of the shirt. The most. "Wearing 10 is not pressure, it is motivation," he says. Ansu Fati, the footballer who personalizes "the immediate present and the future" of Barça, no less, in the words of President Joan Laporta.

The Barça club gave the category of event the extension of the contract of the forward, barely 19 years old, turned into the emblem of the new Barça, with the new directive, with the new team project that lost its old reference, the former holder of the 10 that was given to Fati. The board offered him the number (also to Kun Aguero), and the footballer accepted it after it was approved by the captains, the old guard that has accompanied Messi for the last decade. The whole family of Ansu Fati, members of Jorge Mendes' team, his agent, and representatives of the entity's staff and executives. The doors of the Auditori 1899 were opened, naturally, the same as last week with Pedri (contract until 2026 and 1,000 million clause).

Laporta has made a song to "courage" de Ansu for having taken "a step forward" when he was offered to wear Messi's 10, but denied that the club is putting too much pressure on Fati, who has returned after an injury that has kept him inactive for ten months.

Ansi Fati in his renewal with FC Barcelona. EP

"We want to remove all the pressure," denied Laporta, who described the agreement with Fati as "historic" and finally recognized the certain urgency of Barça to seal the renewal. Mateu Alemany traveled to Portugal to close the last fringes with Mendes and on Wednesday, after the meeting with Dinamo, Fati and his family went up to the Barça offices to sign the contract. Twelve hours later, they all gathered to pose with an agreement that Laporta classified as "historic."

"Pedri and Fati are stars, the best in Europe, and they were market opportunities for any great club"

Alemany did admit that the renovations of Pedri and Fati were priority issues. "They ended in 2022," he assured, making the clauses of their contracts under which the club could extend them. "They are both stars, the best in Europe, and they were market opportunities for any great club," he acknowledged when he has already managed to tie them up for the next five years with Barça.

Fati had no intention of listening to anyone. "It has always been my dream to grow up and succeed here," said the forward, who never had the doubt that he would recover from the long injury that began in November 2020. "Faith was the last thing I was going to lose. Years ago I went through for something similar. He was very motivated to play again and knew that sooner or later he would get it. In any case, he added, "time heals everything." Now he has 10, his life is assured and he is preparing to play the Sunday the classic against Real Madrid.