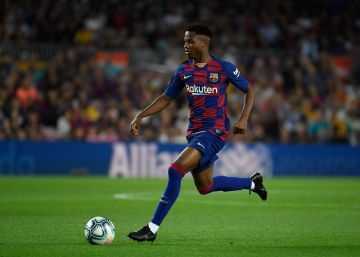 Ansu Fati It can already be called with the Spanish team. FIFA has informed the Federation on Thursday that the bureaucratic procedures so that the 16-year-old Barcelona forward can be summoned for international meetings with La Roja have already been fulfilled. In this way, the young attacker, the revelation of this League, is now available for future calls.

The Federation announced this week that Ansu Fati was not cited for the U-17 World Cup, from October 26 to November 17, understanding that he could be part of the national team in higher categories, either the sub-21 or the absolute. The coach Robert Moreno had included him in a prelist for the next commitments.

"The goal of the federation when we started the process was that Ansu Fati could be available at some time for the Spanish team, not for any particular category, and doing a sports analysis in general we understood that the best thing is for the boy to stay and that you have in the next November calls your option to participate in a higher category, and for that you cannot go to the Under-17 World Cup. The goal was to be selectable and to be able to debut one day in the absolute ”, explained this week Francis Hernández, sports director of the lower categories of La Roja. "Ansu Fati is here to compete in higher categories," added Under-17 coach David Gordo.

With this decision, Barcelona, ​​which opposed its recruitment for the youth world championship, will not lose the young striker. Precisely the day that the U-17 tournament begins, on October 26, the Barça team receives Real Madrid in the classic at the Camp Nou.

The bureaucratic procedures so that Fati can finally be cited with Spain, after obtaining nationalization by nature charter, they were already very close to being completed. FIFA has received documentation showing that his family did not move to Spain to promote the boy's soccer career, which is still a minor. The certificate of the federation of Guinea-Bissau, country of origin of Ansu Fati, which proves that he never played an international match with his team was also already held by FIFA. Now the governing body of world football has recognized him as selectable for any Spanish team.