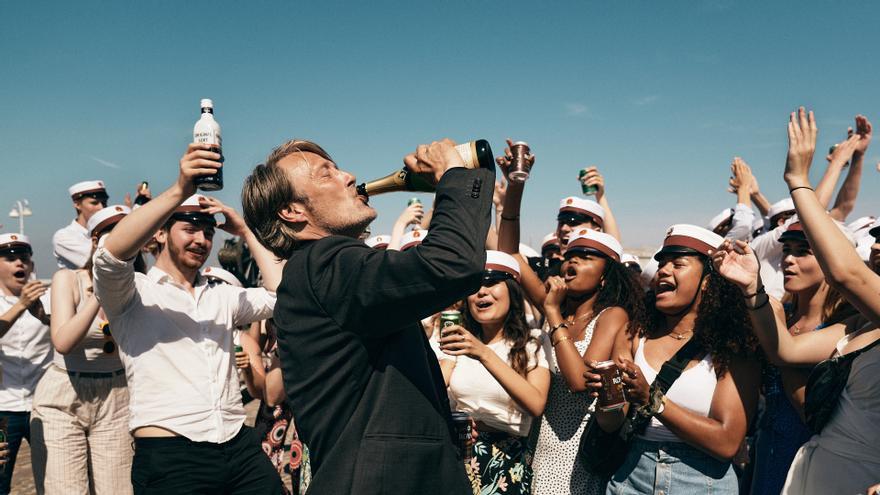 Madrid, Apr 8 (EFE) .- The European film of the year, and with Oscar options, “Otra ronda” by Thomas Vinterberg, arrives this Friday in movie theaters, along with the Galician family comedy “Cuñados”, or the disturbing “The Cloud” by Frenchman Just Philippot.

“I care a lot” with Rosamund Pike is another of the most prominent proposals in theaters, while Melissa McCarthy and Olivia Spencer bring their superpowers directly to Netflix in “Thunder Patrol.”

“ANOTHER ROUND”, AN ETHYLIC CELEBRATION OF LIFE

Nominated for two Oscars -best foreign film and best direction- “Another Round”, by Thomas Vinterberg, is the European film of the year: it swept the European Academy of Cinema awards with the statuettes for best film, direction, actor (Mads Mikkelsen) and script.

The director of “Celebration” and “La Caza” reflects on the effects of alcohol consumption on people’s lives through the story of four friends who decide to test the theory that we should be born with a small amount of alcohol in our blood, as a slight drunkenness opens our minds.

Brother-in-law who get into trouble but love each other, Ribeiro wine and smuggled octopus, are the ingredients of “Cuñados”, a one hundred percent Galician comedy, shot in Ourense, directed by Toño López and produced by Portocabo (responsible for the series “Iron”)

The leading trio is made up of Xosé A. Touriñán, Federico Pérez and Miguel de Lira, three brothers-in-law united by chance. Two of them, Eduardo and Sabonis, have screwed up one of their businesses and need money. The solution will come from the hand of the third, Modesto, in turn brother-in-law of the most famous businesswoman in Ourense.

Halfway between auteur and fantasy films, “Lantern”, the first film by Frenchman Just Philippot (Paris, 1982), was one of the sensations at the last Sitges Festival, where it won the special jury prize and the best actress for Suliane Brahim.

The film invites us to reflect on the vulnerability of farmers in the capitalist system through Virginie (Brahim), a farmer and single mother who, to raise her family and avoid the bankruptcy of her farm, gives herself body and soul to the breeding of edible grasshoppers, to an obsessive point.

“I CARE A LOT”, SUSPENSE AND BLACK HUMOR WITH ROSAMUND PIKE

Thanks to her role as the ruthless Marla Grayson, British actress Rosamund Pike just won her first Golden Globe. “I care a lot” is a suspense thriller and dark humor that also stars Peter Dinklage, Eiza González or Dianne Wiest.

Written and directed by J. Blakeson, the plot revolves around a con artist who, after taking advantage of dozens of retirees, chooses a new victim, Jennifer Peterson (Wiest), who turns out not to be what she thought, as her actions will hinder the work of a major criminal (Dinklage). A week after its theatrical release, it will hit Amazon Prime Video.

“WAR OF LIES”, HOW THE WAR OF IRAQ BEGAN

The German Johannes Naber turns the real events that led to the Iraq war and the overthrow of Saddam Hussein into a fictional black comedy.

The story revolves around a biochemical weapons expert who has been searching for weapons of mass destruction in Iraq for some time without success as a member of a special mission of the United Nations, in the face of general disinterest, a circumstance that changes overnight.

NATALIA MOLCHANOVA, A STORY OF DIVING AND OVERCOMING

Elena Hazanov directs this tale of challenge and self-improvement about an elite athlete who founded the first international freediving federation.

In a world teeming with supervillains, two childhood friends meet again. One of them has designed a treatment that grants them powers with which they can defend their city.

Melissa McCarthy and Octavia Spencer star in Ben Falcone’s new superhero comedy for Netflix, which premieres Friday on the platform.

“WHAT IS REMAINING OF US”, WITH HEATHER GRAHAM, IN MOVISTAR +

Heather Graham (“Boogie Nights”, “Austin Powers”), Sophie Nélisse, Abigail Pniowsky and Jodi Balfour star in this tender and intimate drama about four women (two mothers and two daughters of the same father) who strengthen relationships after the death of the man.

Korean Park Hoon-jung directs this bloody tale of revenge about a criminal who tries to correct the course of his life to help his sick sister and nephew until things go wrong and they end up facing the leader of his gang.

Gangster movies with a good dose of sentimentality that premieres directly on the Netflix platform, on Friday.

“VIVO”, A DOCUMENTARY WITH A PASTORAL VOCATION

Jorge Pareja directs this documentary by Bosco Films and Hakuna Films that brings together four testimonies of religious conversion around the presence of Jesus Christ in the Eucharist and which opens in theaters.

“Vivo” tells the story of Jaime, Carlos, Andrea, and the married couple Antonio and Sonsoles, who “came face to face with someone that many cannot see.”