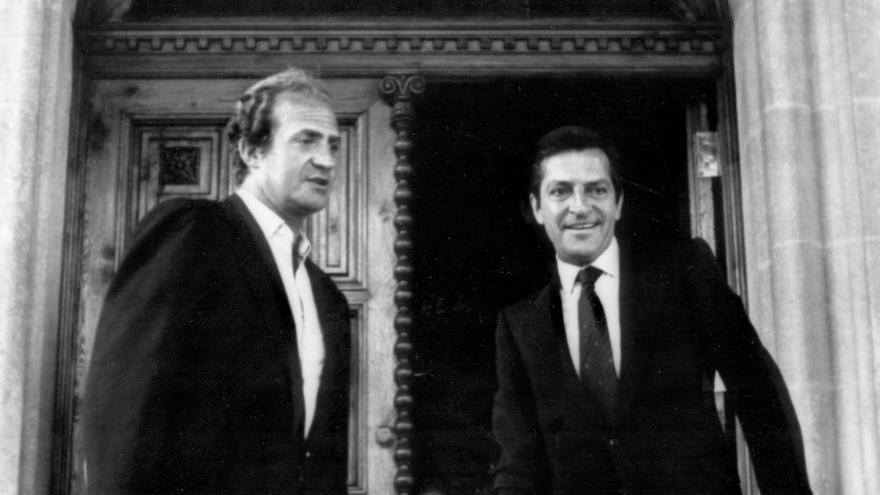 Who was going to say at this point that one of the founding myths of the Transition was going to be mortally wounded by the posthumous testimony of one of the most faithful collaborators of Juan Carlos I who appeared in the ABC, the most monarchical newspaper in Spain. The personal notes kept by Lieutenant General Emilio Alonso Manglano – Cesid director, today CNI, between 1981 and 1995 and died in 2013 – reflect his conversations with the former monarch and provide opinions and facts that confirm what some have written and the majority of the political and economic elite decided to forget.

The published articles come from the book ‘The chief of spies’, written by ABC journalists Juan Fernández-Miranda and Javier Chicote and published by Roca editorial.

The intervention of King Juan Carlos in the process of harassment and demolition of Adolfo Suárez that culminated in his resignation in January 1981 is one of those events of the Transition in which the official version has remained intact. Without being able to specify the real reasons for the resignation, which at the time was received with surprise, it was argued that the relationship between the two was always excellent or, in a less credible way, that Suárez’s decision to retire had been agreed months before. Other testimonies denied it by citing the strong discrepancies between the king and the Prime Minister and the conspiracies in Madrid at the time encouraged by conservative journalists and businessmen.

The altar of the Transition consisted of three members. At the top, Juan Carlos de Borbón. As an architect, the last president of the Francoist Cortes, Torcuato Fernández Miranda. As executor, Adolfo Suárez. The reality is that, once appointed to lead the Government, Suárez began to fly alone. After winning the 1977 elections, he had a democratic legitimacy that he previously lacked and had no problem ignoring what the monarch was advising him.

Manglano’s personal notes confirm the intensity of that separation, which rarely unfolds in the unofficial chronicles of the Transition. In May 1981, the king told the military man about Suárez, who was appointed director of Cesid after the 23F coup, that “as he won elections (in 1977 and 1979), he paid less attention to me.” Therefore, it was not a problem that had started in the troubled year of 1980. What is certain is that in that year the situation ended up being unbearable for the king, who wanted Suárez out of Moncloa as soon as possible.

Suárez had stopped following plans that he had not devised. “He was acting as head of state,” the king told Manglano in the confusion of someone who remembered the role he had previously held. In reality, the 1978 Constitution did not give him executive powers over the head of government.

In the anecdotal field, he remembered the unpunctuality of Suárez in the hearings with the monarch. On other matters, the disagreement was not on minor issues. “Call the Superior Council of the Army and prepare them for the legalization” of the Communist Party of Spain, Juan Carlos warned Suárez in 1977, a capital issue due to fear of an ultra reaction in the Armed Forces against the decision. The president refused to do so. That was the reason for one of Suárez’s first serious crashes. with General Alfonso Armada, then personal secretary of the monarch and one of his main advisers. They had already had a direct confrontation before when Suárez dismissed in September 1976 the vice president, General Fernando de Santiago, inherited from the Government of Arias Navarro. Another decision made against Zarzuela’s criteria.

Manglano’s papers include a phrase from Juan Carlos about his old friend that makes clear the level of personal distancing after his departure from the government: “I am willing to neutralize Suárez.” He was referring, for example, to the promise to make him Duke of Suárez, the condition that he supposedly put in order to abandon politics. If that was the promise, he didn’t keep it. In July 1982, he founded the Democratic and Social Center (CDS).

Other excerpts from the ABC journalists’ book reveal that Juan Carlos I has for decades received money from the Persian Gulf countries outside of any kind of fiscal and political control. Other books had cited the receipt of a millionaire amount sent by the Shah of Iran, the dictator Reza Pahlavi, now confirmed, to finance what in generic terms has been called the Transition, but which actually referred to the financing of the UCD, Suárez’s party, in the first democratic elections. It is the confirmation that illegal party financing was a common feature of Spanish democracy since its inception. And that the personal fortune of the Bourbon king did not begin with the intermediation contracts for the construction of the Mecca AVE, but dates back to the beginning of his reign.

Manglano’s papers indicate that the king confirmed to him that he had received Saudi funds. “The King of Saudi Arabia gave me $ 36 million for the Transition.” That was not the only amount. Later, another million-dollar operation took place: “The (Saudi) king granted him a loan of 50 million dollars (without interest). About 30 are retained in the bank, the rest to be invested. Profit of 18 million dollars. Now they have renewed 30 million under the same conditions, “wrote the director of Cesid after an audience with the monarch. Juan Carlos I had a secret source of financing outside the state budgets thanks to funds from the Gulf. A pattern that it is impossible to deny.

As a way to close the circle, a part of that money ended up in Suárez’s pockets. It was part of the Zarzuela operation to get rid of him. Without giving many details, the king confessed to Manglano that he had given the former president a million dollars after his resignation: “He offered a million dollars to Suárez for when he will stop being PG (President of the Government). Nobody knows. “Since the offer predates his resignation, it could almost be seen as a bribe or, more charitably, a way to ensure a millionaire financial future for Suárez if he agreed to retire from politics. A later entry by Manglano based on the king’s words confirms that the delivery took place.

The documents include other secret sources of financing in favor of Zarzuela, in this case from the reserved funds of the Ministry of the Interior. In at least two years, between 1994 and 1996, the Royal House received five million pesetas a month from these funds. The only discrepancy is that in those years they were delivered in cash so as not to leave any trace and the Zarzuela preferred the previous method, in the form of Bank of Spain checks. Therefore, the practice was common. Manglano’s source was Antoni Asunción, a former Interior Minister.

The reaction of Margarita Robles, then Secretary of State for the Interior, when asked this week about this secret financing of the Royal Household, sums up quite well the attitude of the political leaders of the Transition regarding what citizens have the right to know about the facts of the recent past: “It surprises me that they are papers, that, if they really are and are not Manglano’s personal opinions, they are reserved matter and are secret.”

It cannot be denied that Robles’ position has advantages. It is easier to maintain the myths of the Transition and ignore the conduct of the former monarch if the facts that were hidden from the Spanish remain secret. Perhaps that is the reason why 44 years of democracy have not been enough to pass a law on official secrets, and that the law in force is the one approved under Franco in 1968, whose decree was signed by Admiral Carrero Blanco. At that time, secrets were made to last until the end of time.