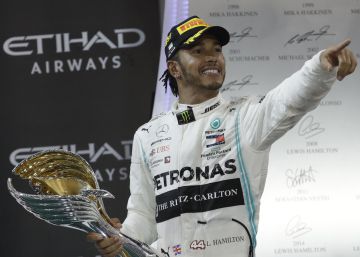 As much as there have been entertaining races, the bulk of Formula 1 fans would surely pay to see each other at the end of next season. In this way it would be much less, only about three months, for the start of the World Cup that is anticipated as one of the most competitive in history, or at least, the one that will match the potential between some teams and others. He shaking to be applied to the technical regulation of 2021 I should open the door to these surprises so unprecedented in the last decade: the last 139 victories have been shared by only three teams (Mercedes, Ferrari and Red Bull), and the last of a pilot not belonging to any of them dates from 2013 ( Kimi Raikkonen, in Australia, with Lotus).

Since the introduction of hybrid technology in 2014, Mercedes, who had been preparing more time than anyone, took out the roller and in those we followed, with six consecutive doublets, five Lewis Hamilton titles and one by Nico Rosberg, in the most exuberant show of superiority in history; even ahead of the one that Ferrari and Michael Schumacher starred in the early 2000s.

The 15 victories of 21 possible – 11 of them by Hamilton – that the star brand has accumulated this course give an idea of ​​the margin that still has in its favor. The last stop on the calendar, in Abu Dhabi, was the perfect x-ray of the state of things: Hamilton dominated a race in which the current champion doubled all those who crossed the finish line behind sixth place. Valtteri Bottas, his partner, tore the last on the grid and finished the room with a sigh from Charles Leclerc (third), while Max Verstappen did the second.

Once the exercise is over, it is time to take stock and, apart from the incontestable authority of Mercedes, there are three binomials that deserve separate mention although for very different reasons.

Ferrari is not up to Leclerc. Scuderia played it this year by getting Kimi Raikkonen out of his way to give his steering wheel to a 21-year-old boy who already acts as a leader in a few races – he concluded ahead of Vettel, with a victory and 24 points more than the German – from a team that seems disengaged, gripped by pressure and terribly erratic in decision making. There have been many failures of the strategists of the manufacturer of the red cars, the last one this Saturday in Abu Dhabi, day in which Leclerc was left without option to fight for the pole due to an error in kindergarten calculation.

The clash between colleagues from two weeks ago in Brazil is the most illustrative photograph of an unforgettable season, although not in the sense desired by the Maranello troop. A bad year for the builder of Il Cavallino which ends with the worst news for the championship, and that Ferrari will maintain the right of veto that it has in the framework of the new Covenant of Concord that will be signed in 2021. "Will we use it at some time? I doubt it. There are teams that believe it is anachronistic, but others consider it good to have a adult in the game, "said Louis Camillero, president of the company, on Saturday in an interview with the Financial times.

Sainz and McLaren rise like foam. If at the worst moment is when talent must make a difference, Carlos Sainz has given the reason to all those who see him much more than the son of the driver who changed the history of Spanish motoring. The Madrid has done everything right to the point of add your first podium (Brazil) and finish the sixth in the general classification, a position well above the expectations generated by a car that has grown as fast as he. Apart from the unattainable Mercedes, the almighty Ferrari and the great Red Bull, no one has added more points than Sainz, who has even been able to overcome the second driver of the red buffalo structure. McLaren finished 2018 in the sixth position and a year later he does it in the fourth, demonstrating that there is no better showcase than this to show himself as an interesting (and reliable) option. "Finishing sixth in the World Cup with the panorama we have, is something I did not expect before this weekend," agreed the Spanish.

Verstappen is not satisfied. Together with Leclerc, hope and the best mirror for generations that come and see in the Dutch an overflowing talent. Although Hasselt's boy had a hard time finding the balance between aggressiveness and certainty, he now has it under control and has become a real killer –Determines the third, ahead of the two Ferrari–. For the good of all, now we just have to wait for Red Bull to get the key to revitalize his car enough to become a candidate for victory more often. Win three times (Austria, Germany and Brazil) is not easy, but with that it is not enough to aspire to the dimensions that have been marked in Milton Keynes. Having managed to prevail with the Honda engine (Austria) was a relief that can only make this alliance boost for what is coming. "I knew that if it did not arrive in 2019 it would happen in 2020, but I was not worried at all. But it is clear that the victories and podiums help to gain confidence with a view to the future," summarizes Mad Max.