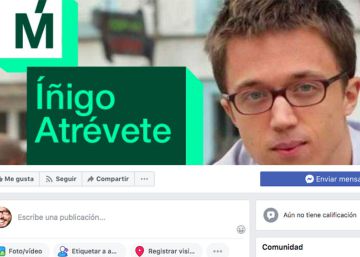 On September 19 a page called Facebook appeared on Facebook Íñigo Dare. Errejón had not yet announced his final decision on whether to stand for the 10-N elections. The page was linked to a petition on Change.org he asked Errejón to articulate "the popular alternative to the right." "We do not feel represented with a left that is incapable of governing and transforming society, even when the people are with it," said the petition, which concluded with an explicit call to the leader of More Country: "Therefore, we ask you, Íñigo, to be present at the next elections. Spain needs an alternative to immobility and failure. "

From Facebook they admit that their system has clearly missed the political advertising that made that page and they did not add it in their Ad Library. This transparency tool offered by Facebook was key to discover a network of fake pages in favor of the PP. If this Errejón page has escaped Facebook detection, other different They could also have drained. When Facebook detects an unregistered political advertisement with transparency information, it cancels it and includes it in its Library. If you do not detect it, the message remains on the web until you consume your budget. This was the case with "Iñigo Dare".

"That of Dare who puts it, you? Dare to divide the left further, someday we will know who pays you"

When asked by EL PAÍS, the network has recognized that it will add the advertising of this page to the library "shortly". The company takes advantage of this ruling to encourage users to report ads that they believe should carry a "paid for" notice.

The page Íñigo Dare It has all the characteristics of a fake account: there is no author or community, it stopped being used just two days after its creation, it only created 4 posts and the name and photo of the person who created the Change.org does not appear anywhere .

More Country has confirmed to this newspaper that no one in your organization had seen that page before or have anything to do with it. Nor do they know who Leonardo Nieto is, the name of the person who signed the petition on Change.org on September 18 and obtained only 107 support from the 200 he requested. From Change.org they say that Leonardo Nieto has not done any other campaign.

This Tuesday, after the questions in this newspaper, they tried to contact Nieto without success: "Today we tried to contact the creator of the request through the email account associated with your user and the email system has returned us an error message, so we have proceeded to provisionally close the petition, "they say from Change.org.

Today we tried to contact the creator of the request through the email account associated with its user and the email system has returned an error message, so we have proceeded to provisionally close the request.

The page Íñigo Dare. got only four likes, but the post that was promoted had a remarkable activity: 784 interactions and 836 comments. The comments are obviously from real people who argue with fervor if Errejón should take the plunge. From the tone of the messages it seems that the authors of the page selected as audience specifically followers of Podemos: "That of Dare who put it, you? Dare to divide more left, someday we will know who pays you," says a comment, which received 151 positive reactions. "You better go directly to the PSOE," says another. Or "Not with my signature. Let your party work. I support PABLO IGLESIAS, U. PODEMOS", says yet another.

If those who created this page aspired to create discontent and disenchantment, they succeeded. The candor of the messages gives an idea of ​​how easy it is to generate mixed feelings on Facebook. From Change.org they also confirm that the list of signers, according to their analysis systems, is completely normal. Normal users of the page, therefore, signed a false request created by someone unknown.

One of the advantages of a network like Facebook is that it allows the potential public to reach a request like this and in this case, in addition, anonymously. It's like putting a sign in a closed room just for a group of chosen people and encouraging them to express their opinion. The most receptive audience will see and react, and the rest will not.

This page emerges a few days after a campaign in favor of the PP used the image of Iñigo Errejón to promote abstention among left-wing voters. If Facebook does not give more information, there is, however, no evidence of an alleged relationship of this account with the network that operated in favor of the PP, beyond the obvious use of Errejón to divide to the left. The appearance of a third party could increase the difficulty to achieve seats of the left, as it happened in the right in the last elections.