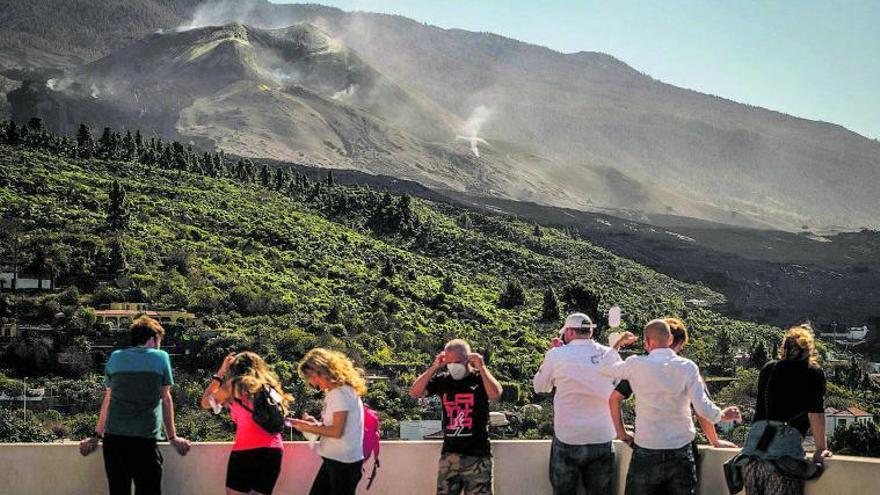 From early in the morning today, some 700 people can return to their homes, of whom were evacuated as a result of the Tajogaite eruption. The decision was adopted yesterday by the management of the Emergency Plan for Volcanic Risk of the Canary Islands (Pevolca) after consulting the Scientific Evaluation and Monitoring Committee. The forecasts advanced last Tuesday by the Pevolca to reduce the exclusion zone that still remains on the margins of the areas affected by the volcano's runoff are confirmed.

The measurement of gases has ruled out that there are health risks in the spaces that today are opened so that their neighbors can return. The moment came for the 600 residents located on the north bank of the volcanic lava flow and another 100 from the Jedey neighborhood, in El Paso, to the south. Specifically, from 7:00 am today residents on the north side of the wash are allowed to return home whose homes are located in the areas between the coastline and La Laguna Mountain, the area from the east of the aforementioned mountain as far as the La Laguna junction –including the La Aldea road–, the houses located on the Baile Bueno road, those on the Cruz Chica road and the Los Campitos road, the houses on the Tamanca general road (LP- 2) and those of the San Nicolás highway (LP-212). In addition, some points on the south side are also incorporated and the return of inhabitants of the houses located on the general road of Jedey (LP-2) and up to number 6 of that road is authorized, where the new control point will be located. The buildings located on the Cuesta Blanca road, Piteras road and La Dichosa road are included in the relocation.

Already a thousand residents of the neighborhoods of Tacande, Tajuya and Marina Alta began to return to their homes last week. In this way, at least another 4,000 residents of the affected areas are waiting to resolve the situation, among which are those who have lost their homes and others who were evacuated from the neighborhoods of Las Manchas, in El Paso and Los Llanos. from Aridane, or from Puerto Naos, El Remo or La Bombilla, in the second municipality.

It is in these coastal neighborhoods where the concentration of gases continues to be described by scientists as "intense" in the continuous monitoring process they carry out. They even suspect that they may come from lava canals that are drying up and where remains of the degassing of the main cone arrive. For this reason, there is a risk that in those areas close to the laundry, gas pockets may open and affect the neighbors on their return home. The possible effect of the tides in the area, which could help push gases from the subsoil to the surface, is also evaluated. That is why the possibility of accessing these areas is considered "highly dangerous" until the degassing is resolved.

Faced with this situation, Pevolca cannot decide to resolve these evacuations and, once again, warns those who do return to their homes today that the security zones marked around the front of the washes and established after the appropriate analysis must be respected. of risks, and that those buildings that, according to the municipal technical offices, do not meet habitability conditions may not be occupied. Likewise, the recommendations of not accessing underground spaces such as garages, storage rooms or basements without prior gas measurement, nor without company, are maintained. In addition, you must first make sure that there are no bulges, deformations or cracks in the walls or ceilings. If this is the case, the respective city council must be informed.

Do not smoke or turn on the light

It is also advisable to turn off any ignition source, not smoke or not turn on the light until the building is ventilated, and open doors and windows to do so, waiting fifteen minutes before entering the interior. In case you notice dizziness, shortness of breath, nausea or lack of strength, it is recommended to leave the building quickly and call the emergency number 112, so it is always necessary to have an operational telephone. In addition, Pevolca recommends that before returning to the evacuated areas, it is necessary to obtain information through official sources and follow their indications, being aware that in no case should the limits established by the authorities be exceeded in the areas that remain unchanged. traffic exclusion.

The Cabildo de La Palma has started the construction works of the provisional clean point in Los Llanos de Aridane, which will make it possible to replace this public service in the Valle region, after the advance of the lava flows from the volcanic eruption destroyed these facilities that were They were in the industrial area of ​​Callejón de la Gata. The counselor responsible for the Classified Activities and Waste Service, Nieves Rosa Arroyo, highlighted that the works for the implementation of the clean point have been contracted through the emergency procedure for a budget of 61,150 euros and an initially planned execution time of about two months , choosing for its location, with the collaboration of the Los Llanos de Aridane City Council, a plot in the area known as El Roque. Arroyo emphasizes that part of the site destined for the future Los Llanos de Aridane Senior Residence is used for this purpose in the face of the volcanic emergency, emphasizing the provisional nature of the Clean Point, which will be dismantled once the final one is built. The clean point, for which around 1,800 square meters of land are allocated, will have an independent entrance and exit for vehicles through Camino Cruz de La Paloma street. | RP