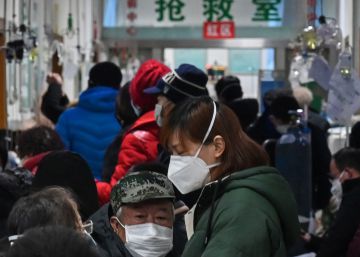 They broke the news this Wednesday at Wuhan hospital number 4. His father-in-law had died, one of the more than 200 fatalities of the coronavirus That asuela that city. The individual whom a police report published on Friday identifies as Ke could not contain himself. He pounced on two doctors and began beating them, tearing off their protective clothing. He is now in police custody.

It is one more incident of the many that expose these days the fury of the public around a crisis, the coronavirus epidemic, which they blame for the disastrous management of local authorities in Wuhan and its province, Hubei. An epidemic that has already infected about 10,000 people and in which, despite the strengthening of supplies and the dispatch of thousands of additional doctors and health workers, sufficient protective material is still lacking in hospitals and doctors and nurses are on the verge of exhaustion.

The tension between the central government – willing to end the epidemic and discontent with the oblation at all costs – and local authorities who want to avoid being held responsible for chaos, is evident these days, when accusations of one and the other side. And the lowest step leads to losing. According to the magazine Southern Weekly, and 33 municipal or provincial officials have been dismissed, reprimanded or a file has been opened for mismanagement of the crisis.

To the discomfort by the overflow in the sanitary centers the publication of a series of scientific information has been added that corroborate the suspicions that key information was hidden to the public during the first weeks, while the problem was growing in December and the greater January part.

A report by a large group of official Chinese experts, who published the New England Journal of Medicine on Wednesday, found, after examining the first 425 cases of infection in Wuhan, that contagions between human beings began to occur from mid-December. But the authorities insisted that there was no evidence of that. Finally, it was admitted on January 20, when the spread of the epidemic began to skyrocket.

“To say that I am furious is to fall short. I have no words, ”the Chinese Twitter, the Biology professor at Zhejiang University Wang Liming, published on Weibo, after reading the report,“ is the first solid proof that it was intentionally concealed that there were infections among humans. ” Your message has since been deleted.

Much of the anger is directed not against the central government – the consensus among the majority of the population is that things have improved since taking the crisis control– but against the provincial authorities of Hubei and the mayor of Wuhan, Zhou Xianwang, a figure who seems to have the days counted in office. The last to attack him was the chief epidemiologist at the Center for Disease Prevention and Control, Zeng Guang. In an interview with the state newspaper Global Times, he pointed out that the Wuhan municipal government may have taken a long time to respond to the crisis “mainly because of the lack of scientific knowledge” about the new type of coronavirus, but also because of “certain indecision in the take action ”.

During those first vital weeks, critics said, Zhou not only took time to provide information, but also acted so that, clearly, he helped spread the infection. At the beginning of January he organized a meal with 40,000 people to break a participation record. And he insisted that people go on vacation for the lunar New Year: before the quarantine closure on the 23rd, five million people had left the city.

He is also accused of having tried to suppress information. On January 1, the Wuhan Police announced that they had taken “legal measures” against eight people suspected of “spreading rumors” – a charge that may involve up to seven years in jail – for reporting that those cases of strange disease that had been detected They looked like SARS. Severe Acute Respiratory Syndrome, also originating in China and killing almost 800 people worldwide in 2003, is caused by another coronavirus from the same family as the current one.

This week, the Police have withdrawn the accusations against the eight, after the Supreme Court was very critical against the actions of that body. “It would have been lucky if people had believed them (the‘ rumors ’), and started to wear masks and take precautionary measures,” he lamented.

In a televised interview on Monday, Zhou acknowledged that his City Council did not disclose the necessary information as soon as he had it at hand and offered his resignation. But, in an unusually direct accusation against higher levels of power, he said he did not do so because he did not have permission from above to reveal it. “As a local government, we can only report (about an infectious disease) with an authorization.”