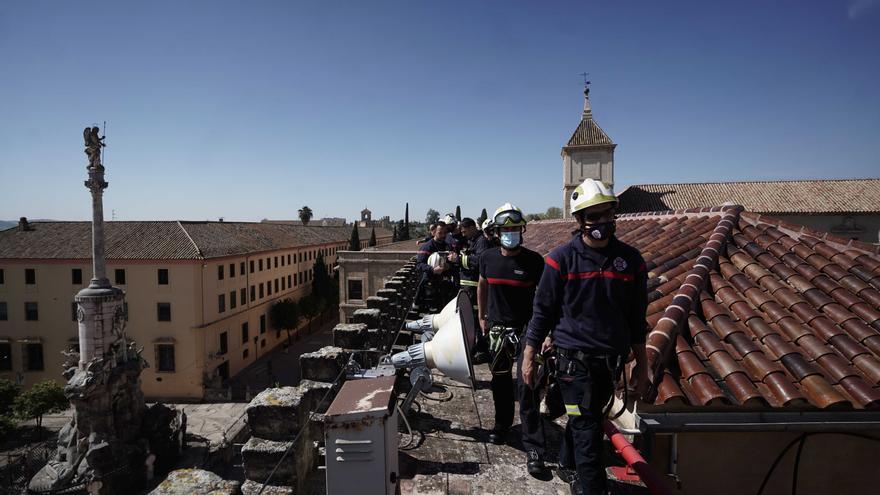 Córdoba, Apr 3 (EFE) .- The Mosque-Cathedral of Córdoba has multiple and sophisticated fire prevention systems, but the canon responsible for the security of the UNESCO World Heritage monument, Agustín Moreno, trusts “angels with hands”, in reference to the fire brigade, in the event of a fire.

Moreno makes this comment fourteen meters above the Patio de los Naranjos, when the last of the five expeditions of the Fire Fighting and Rescue Service of the Córdoba City Council (SEIS) that know the peculiarities of the building in case they had to intervene, reaches the The area of ​​the roofs closest to the Guadalquivir, from where you can see the Triumph of San Rafael, crowned by the archangel, custodian of the city.

“We are under the protection of the wings of Saint Raphael”, says this priest who wanted to be like his parish priest, to whom the vocation came in 1987 and to whom the current archbishop of Seville, Juan José Asenjo, appointed canon in 2008.

Graduated in Theology with civil recognition in Spain and doctor in Social Doctrine of the Church from the Lateran University of Rome, as jovial as he is hyperactive, he addresses the thirteen firefighters who complete the visit of the 120 members of the staff: “Here we trust two types of angels, the ones with wings and the angels with hands, which are firefighters. ”

Having passed the last nave of the Muslim structure, the fourteenth, the priest hurries: “Gentlemen, let’s move forward, please!”

There are also stops to comment on a possible operation. “Here, the water runs as long as there is no hole (caused by the fire) through the roofs. If you want to throw water on the wooden slab, you will have to get in”, says one of them. “You will have to get inside,” says another, alluding to the access gates to the beams, some Muslim and dating from the 8th century.

Before arriving by one of the three practicable accesses for emergencies of the four that there are to the roofs, one of the security managers of the building, Manuel Fontiveros, specifies the security systems, situation and circumstances of the monument.

“With the load of fire that is here, with how dry the woods are, between when we arrive and we do not arrive …”, reflects a firefighter. “That is the problem”, Fontiveros points out, which, methodically, breaks down how the personnel will act from the Mosque-Cathedral in the event of an accident, from when it will indicate and wait for the door closest to the fire, until it will accompany them to the focus.

For Daniel Muñoz, head of the SEIS, after whose appointment all preventive activities “that were in disuse” have been resumed, as he told Efe, “the greatest landmark we have in Córdoba is the Mosque-Cathedral”, where fires have occurred. in 1910, due to a spark during a storm in the dome of the transept that burned four beams, and in 2001, when the sun’s rays were projected in the Archive on flammable products and lit some files, of which 25 were destroyed.

That is why “the visit of the five sections has been carried out to assess the fire protection facilities and the difficulties that we may encounter in the face of a claim”, which has left “very positive conclusions in terms of accessibility, facilities, maintenance and the security check “.

The expedition, also accompanied by the other person in charge of the building’s security, Rafael Iglesias (an exceptional measure due to the presence of the Efe team), reaches another of the building’s critical points, the Archive.

Until the automatic extinction project using novec gas and the sectorialization of its rooms is implemented, the skill of the firefighters is the preservation of “the most important of the most important,” which goes from letters from Santa Teresa and San Francisco from Borja to 10th century books and incunabula, Alberto Estévez specifies.

The project is “very large and economical,” Fontiveros said earlier, and is paralyzed by the economic situation. The Cabildo Catedral lost nine million euros in the management of the monument last year, seeing its income reduced by almost thirteen million as a result of the pandemic, most of them in tickets, according to the accounts published on its transparency portal.

Two other specialists, Lourdes Pérez and Patricia Gómez, describe the music books, from the 15th to the 18th centuries, to soak them in one of the jewels “to safeguard”, the canon adds.

From previous visits there are contributions from the firefighters “very satisfactory, because sometimes you don’t fall until professionals who extinguish the fire see it,” says Fontiveros, before they return to finish their shift through the same door of the Patio de los Naranjos by the one that entered, that of Santa Catalina, the most important of the enclosure after the one of Perdón, according to Manuel Nieto Cumplido in “La Catedral de Córdoba” (CajaSur, 1998), dated from 1268 and right where the attack of the fire hydrant arrives of the building.