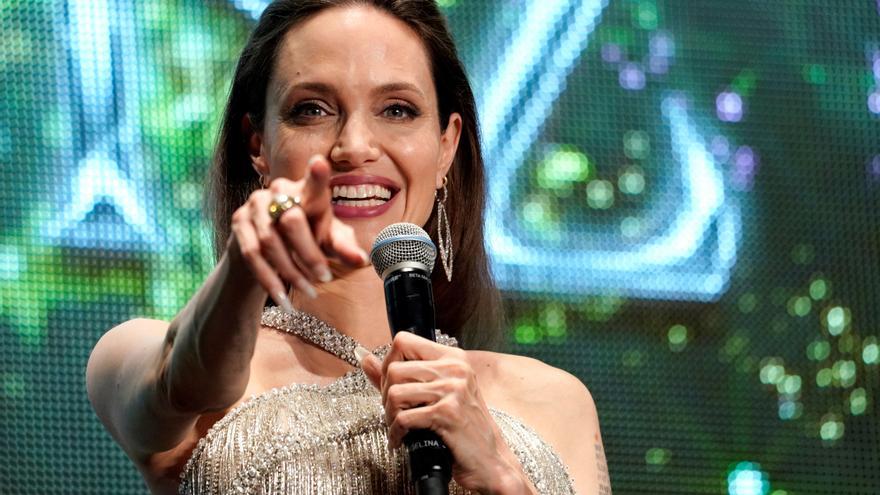 Jolie, wearing a long cream trench coat, a Louis Vuitton bag and sandals of the same color and in her hand the bottle of Peter Michael wine, arrived alone, without even a bodyguard.

The newspaper accompanies the article with photos of the award-winning actress, 46, entering and leaving the building, and further notes that Jolie is in New York for a belated celebration of her birthday on June 4.

The newspaper also indicates that the morning after the visit, the 48-year-old British actor went for a run in the rain in his neighborhood.

Jolie and Lee Miller acted in the film "Hackers" in 1995, after which they married, when she was 20 years old.

The New York newspaper recalls that the marriage did not last long and the couple separated in September 1997, after their busy schedules in Hollywood forced them to live with an ocean between them and they officially filed for divorce in early 1999.

Also that even though they have remained friends since their separation, Jolie has publicly expressed her regret for ending the marriage.

In a 2004 interview with B magazine, Jolie said divorcing the Brit "was probably the dumbest thing I've ever done," the Post further recalled.

After this relationship, Jolie married and divorced two more times: Billy Bob Thornton, with whom she was from 2000 to 2003 and Brad Pitt, 57, with whom she has a custody battle for her children, while Miller was Ten years married to "Law & Order" actress Michele Hicks, from whom he separated in 2018.

On Friday, Jolie visited a handful of small art galleries in the Red Hook neighborhood, also in Brooklyn, but it is unknown if she went alone.