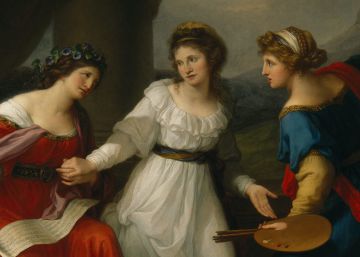 The Royal Academy of Arts in London this week announced the cancellation of the long-awaited exhibition dedicated to Angelica Kauffmann (1741–1807), one of the first great teachers in the history of western painting. The sample had been inaugurated in the Düsseldorf Kunstpalast, in late January, but had to be closed prematurely due to the health crisis. From there it would go to London to be inaugurated on June 28, but it will not be possible. The year 2020, announced as the year in which European museums were going to alter their male programming to make room for female artists, has been canceled. For now the British institution keeps the plans intact with Tracey Emin / Edvard Munch, which should open on November 15.

Kauffmann’s exhibition included 100 paintings, drawings and sculptures that had never been shown in public before, to show how it was that time when “everyone had gone crazy for Angelica.” For J. G. Herder, the neoclassical painter was “the most cultivated woman in Europe” and the most applauded. He received artistic training from his father, the muralist Johann Joseph Kauffmann, with whom he worked as an assistant. After spending three years in Italy and being chosen as a member of the Academy of San Luca in Rome, in 1765, it was in London where, after her trip in 1766, she became famous as a painter of history and portraitist (especially female portraits ). For 16 years he was in the English capital, he exhibited regularly at the Royal Academy. In fact, she was one of the 22 founding members in 1768 of the Royal Academy of Joshua Reynolds, and although she worked for the aristocracy and attended royal commissions, the pinnacle of her career is the four paintings to decorate the ceiling of the Somerset home, asked by the Royal Academy. Her dealer was her husband, the painter Antonio Zucchi. Later he would open one of the most requested studios in Rome. His funeral was directed by the sculptor Antonio Canova, based on that of the Renaissance master Rafael. Kauffmann enjoyed an unprecedented and exceptional career – with over 1,500 paintings – among women.

The Swiss-born but Austrian-educated artist was able to survive the male-dominated world, but art history ignored her accomplishments and posthumous recognition faded. This is why the retrospective scheduled at the Royal Academy was so important, because it was there that he had to defend himself against one of the most unpleasant chapters that tried to destroy his talent: in 1775, a painter named Nathaniel Hone presented at an exhibition of the institution a painting in which Kauffmann was depicted naked in the upper left corner, having fun with other nude artists, including his friend Joshua Reynolds. The humiliation attempt was stopped by the painter with a letter to the board of directors of the Royal Academy – composed of men – in which she demanded that Hone’s painting – which is kept at TATE Britain – be removed from the sample or that remove their own paintings from it. Kauffmann won the battle with an implacable argument: if the academics had had that dignity that makes them superior to the painter’s evil, “they would have taken into account their respect for the sex” of the artist.

The Nazis on the coast jump into the novel

Eduardo Noriega: “I hope that the cinema will always be with us”