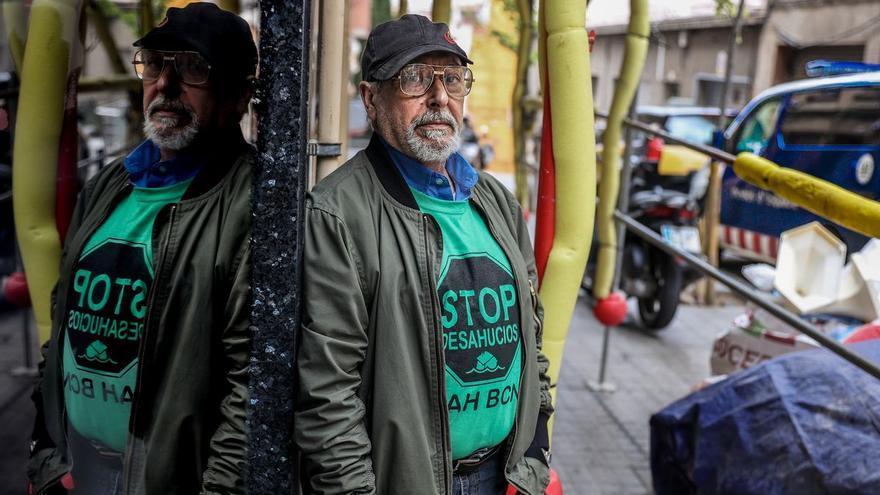 Although this man often has a vulnerability report (charges the minimum rent), and the floor he occupies is a bank, his case remains outside the state moratorium on evictions promoted during the pandemic Angel is not a dependent person and does not have dependents. “Me now I only ask for the three-month moratorium. Some of the time, I do not ask for more, “says the neighbor, with an eviction date for this Wednesday, May 26.

As he speaks standing in front of his goal, he shows on his mobile phone images of another eviction, that same week, also in L’Hospitalet. “My case is not isolated, despite the moratorium, many vulnerable families are being evicted in the middle of the pandemic and that cannot be, and even less when they are floors of banks, which will remain empty,” he continues while various agents of the Mossos d’Esquadra they walk in front of the scene. The police presence in the street today has nothing to do with his case, “but whoever they are looking for, surely it is not to give him good news,” he jokes despite everything.

This is the third eviction process that Ángel lives. On the first floor where you were evicted They offered him 3,000 euros to leave. At that moment he took them and left. He later entered the first penthouse of this same block, in which he lived since he was 12 years old, then owned by another bank. He lived there for a while until they too evicted him. He left the attic first and went into the attic second, the front door, owned by Divarian, floor from which now, again, they are about to evict him. “As is the situation and with my income, I live from day to day, I have no savings, the only solution I have left, if they don’t agree to offer me a social rent and they end up throwing me out from here, is to kick another floor, I have no other “, concludes realistically.

The spokeswoman for the PAH Barcelona, ​​Lucia DelgadoOn the one hand, he points out the progress that the moratorium implies – “for the first time in 12 years of struggle we have something that families can take advantage of to gain time,” he indicates – but he regrets that this moratorium has fallen short, leaving out cases like Angel, despite being a case of a large fork and being a vulnerable person. “It is incongruous that many vulnerable people do enter the criteria of the emergency table, do not stay out of the moratorium,” says the activist, who recalls that Ángel would enter into Catalan law 17/2019, that forced the big forks to offer a social rent to vulnerable families, decree annulled.

“We work so that the first law that promotes the new government of the Generalitat restores the knocked down points of the 17/2019, since Ángel’s situation is that of many families. When the justice stopped the decree, there were 3,200 families who were about to sign a social rent that were left unprotected with this annulment, “recalls the activist.