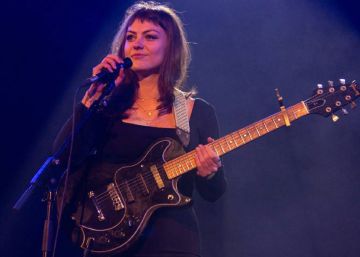 Yes Angel Olsen (Saint Louis, Missouri, 33 years old) flying a flag would be that of broken hearts. With the fifth album of his solo career, All Mirrors, the American artist has achieved the unanimous recognition of the specialized press in a professional and personal vacuum: “I had never worked with so many people around me. I have always been to have everything controlled, but in this case, I have delegated a lot to colleagues who are both excellent musicians and the album has been created on the fly, but I have always had a strange feeling of familiarity, ”he explains.

However, the crowd was not always there. This album, like the vast majority, began with a break. It was that of a long relationship of the artist, during the tour of her previous album MY WOMAN (2016), in the thirties crisis. In that momentous moment that young generations experience when plans fall, people begin to settle their heads and one lives from his dream: “there is a great idealization of the musician’s profession. People believe that it is only about living great experiences. And it doesn’t stop being that way, you travel all over the world and meet wonderful people, but you just didn’t connect with your experiences. It’s like living every day at your birthday party. You love it, but you can end up hating the cake, ”he confesses.

Faced with such a panorama, the singer left her habitual residence in Asheville, North Carolina, for a while to travel to the other side of the country, to the remote Anacortes, in the state of Washington. Olsen does not remember reading anything that would inspire him when writing, watching or watching a movie, or listening to any song that moved him. It was more about looking inward and emptying out, like a kind of purge: “The fact of leaving such a long relationship and the life I was leading had led me to be very disconnected, I wanted to see what was there,” he says . The result is a dark disk, which transits through all kinds of emotions and is about his most symphonic work so far, with pianos, strings and a subtle but constant and incisive presence of synthesizers, to speak, after all, of a very primitive feeling: being broken inside.

Angel dreamed of being a pop star as a child, but adolescence led him to an introversion he never wanted to leave, and to which he owes brilliant titles of songs from his career, such as Never be mine, Unfucktheworld, Burn your fire for no witness or on this disk, New Love Cassette. Olsen fought for the first single of his new work to be a song of almost seven minutes: “I did not succeed, but it was the second. I was sure that Lark I had to open the album because it sums up everything I wanted to tell on the disk, ”he clarifies.

Listening to it refers to the sensation of a theatrical performance, with different acts, ranging from the vertiginous rhythm of the first two minutes, in which the artist reflects on what could have been and what failed, to the psychedelic atmosphere of the Dream on! that throws with uncontrolled rage, and seems a kind of adjustment of accounts with the past, to the fireworks that seem to be glimpsed in the change of record of minute five: “that happens because in reality there were four different songs. It took years to do it because I didn’t know where they were going until I decided to put them together and it fit like they were the pieces of a puzzle. ”

The sound of All mirrors, its simple homonym, reminds of the halo of light that illuminates a curtain at dawn, with dust motes floating in a room that seems to be coming over the listener, to move on to the methodical observation of sadness in Spring, with a plea for hope: give me a slice of heaven, just for a while. And finally Summer, a song reminiscent of the first time in which, after a breakup, one looks in the mirror and tells oneself that tonight is coming out. “The first version of the song was with a guitar and it sounded very sad. When we took her to the studio we started to try another kind of sound and I think it fit better. Deep down it’s about telling yourself that it’s okay to be sad, but deep down it’s about moving on. ”

Seven musicians, with black costumes and instruments accompany her during her tour, which takes her this Saturday to Madrid, and will bring you back to the Mad Cool festivals, in Madrid, and VIDA, in Vilanova i la Geltrú. He is excited to participate in one of the most important festivals in the country, and seems cheerful when he describes the environment he will find in the Catalan festival. A concert only to avoid by those who like to speak at the bottom of the bar.

“I injected blood from Californian virgins to rejuvenate”