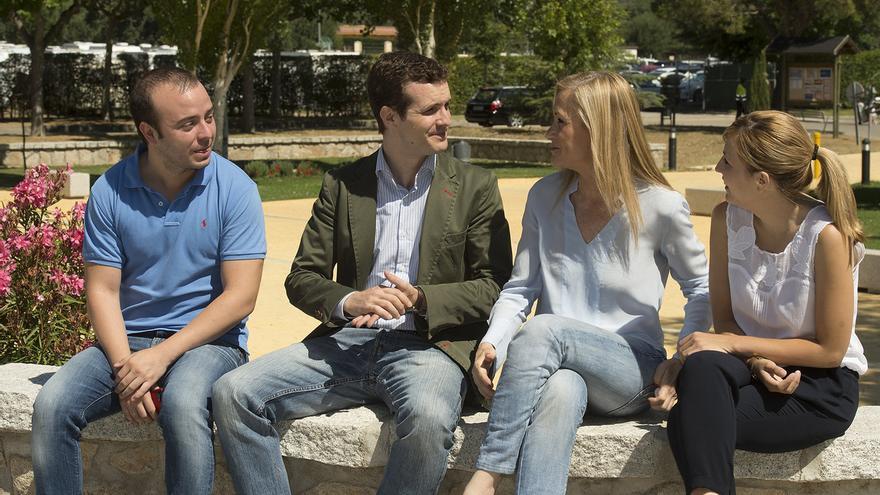 The outbreak of the internal war of the PP as a result of the alleged espionage by the leadership on the brother of Isabel Díaz Ayuso has claimed the first victim: Ángel Carromero, one of the main advisers to the mayor of Madrid. The information pointed to him as the executor of the operation and his resignation puts an end to the failed attempt by the national leadership of the PP and its leader, Pablo Casado, for giving a second political life in the Capital City Council to the young and unknown New Generations politician who made headlines a decade ago after being convicted and imprisoned in Cuba for the reckless murder of Castro opponents Oswaldo Payá and Harold Cepero.

First in the arms of Esperanza Aguirre –who protected him in the most difficult moments– and after Pablo Casado –responsible for raising him to a relevant position in the Madrid Consistory–, Carromero had learned to move discreetly in the second row of the Popular Party. Always safe. From the General Coordination of the Mayor's Office, a position he had held since 2019, he continued to do so with one foot in Genoa and the other in the Palacio de Cibeles due to the misgivings of a part of the PP for the return to public exposure. But the total war unleashed between the Puerta del Sol, seat of the regional government, and Genoa has taken it away.

Upon his departure, the mayor, José Luis Martínez-Almeida, was already pointing out early this Thursday after denying that the Municipal Housing Company of Madrid had sponsored the commission to a private detective. "In the event that it is shown that he had irregular conduct, he will be immediately dismissed. [...]. Whether Carromero or any other person, he will stop working at the City Council immediately." The regional president, Isabel Díaz Ayuso, also asked "to purge responsibilities" from the Madrid PP leadership, of which Carromero was part as Deputy Secretary of Electoral , although his name no longer appears on the web as responsible for that position but as President of the Electoral Committee.The Madrid PP confirms that he continues in that position.

The information published throughout the day, that extend the investigations of the leadership of Genoa to the two ex-partners of the Madrid president to find out if they have benefited from public contracts from the regional governmenthave been surrounding the general coordinator of the mayor's office, who has presented his resignation on Thursday afternoon "after having a conversation with the mayor" of Madrid, according to the City Council.

Carromero did not arrive in 2019 new to the Madrid Consistory. In March 2013, a year after what happened in Cuba and after unsuccessful attempts by the Madrid PP to get the government of Mariano Rajoy to pardon him, former Mayor Ana Botella hired him as an advisor for 50,474 euros a year. The departure of the PP from the municipal government in 2015 did not expel Carromero de Cibeles: the popular municipal group kept him on a salary until the conservatives took the baton after the municipal elections of June 2019. With his promotion to general coordinator of the mayor's office, the salary multiplied to 91,144 euros gross per year.

The party embraced him even at the most critical moment of his life, keeping him in his job during his time in prison. He was receiving a salary as an advisor to the Moratalaz District Board from July 2012 to January 2013, when he was able to return to Spain. Carromero received his full salary during the summer and from September to January it was cut to a third due to "provisional legal exemption". He received almost 9,000 euros in total in this black stage. The guarantee of a job was a fundamental piece to facilitate his prompt release on probation. After two weeks in the Segovia penitentiary, he was granted the third degree and he returned to his work, controlled through a telematic bracelet that he wore until April 2015, when he served his sentence.

With Pablo Casado he maintains a friendly relationship that emerged in New Generations. The leader of the PP acted as the spokesman for his family after the car accident in Cuba and, back, Carromero turned in 2018 with his candidacy for the party's primaries. The popular municipal group, then led by Martínez-Almeida, gave him and two other advisers vacations to campaign for Casado.

In the internal battle of the PP he had totally aligned himself with Casado and against Ayuso. Aguirre already pointed it out without naming him a few months ago in an interview in El Mundo, in which he criticized the "chiquilicuatres" of Genoa and said that Almeida was surrounding himself with "kids." In an interview this Thursday, Aguirre was asked if there are still "children and chiquilicuatres" in the PP. "There is one who has already resigned today. We already have one less," he said after Carromero's decision.

In recent months it was common to see him at City Hall events and, above all, of the party, although a part of the party was suspicious of that exhibition. The municipal opposition was also very critical of his appointment as senior adviser in the Palacio de Cibeles. More Madrid came to appeal it, since according to the law the appointment of coordinators and general directors must be made among career officials, with few exceptions. None of this stopped the plans of the PP, which now drops one of its protégés in the shadows at the beginning of an internal dispute without precedent in the organization.