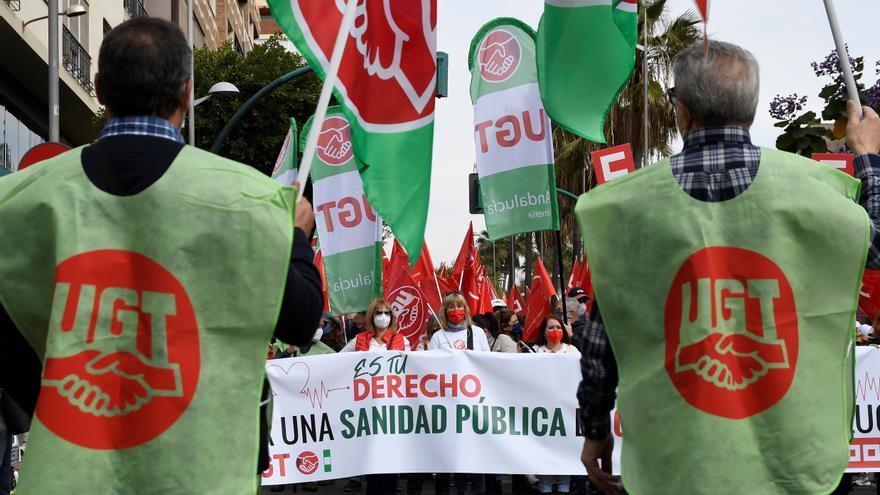 Thousands of people have demonstrated in the eight Andalusian capitalssummoned by CCOO and UGT under the motto 'It's your right. By a public healthcare of quality in Andalusia', to which the leftist parties and social organizations.

In Seville, where the main event took place, thousands of people walked the streets from the central Plaza de San Francisco to the Palacio de San Telmo, seat of the Presidency of the Junta de Andalucía. The protest was attended by the general secretary of the CCOO-A, Nuria López, who explained that It is about “saying no to policies that make the health system go downhill without brakes”so that “people tell the Government of Moreno Bonilla that do not turn a deaf ear, that they want solutions to the problems”.

His counterpart in UGT-A, Carmen Castilla, has declared that the current situation of public health "is the result of 'misguided' political decisions and insufficient resources”, and lamented that, “in the midst of sixth wave”, there are “12,000 professionals who fulfill their contracts now”.

In Córdoba, more than two thousand people have passed through the main avenues of the capital until they reached the Andalusian Government Delegation, where they have read a manifesto in which they denounced the collapses in the waiting lists, the investment deficit and the lack of resources in public health.

In Malaga, some 20,000 people -according to the unions- and 2,500 -according to the Government Subdelegation- have participated in the march called by CCOO and UGT, with the support of parties such as PSOE and United We Can and various social organizations, shouting " Public Health" and with banners demanding quality public health, the rights recoveryas well as more doctors.

Demonstrations in defense of public health in Andalusia. EFE

In Granada, according to a first estimate by the Local Police, between 5,500 and 6,000 people have demonstrated since midday through the streets of the center of this Andalusian capital and Cádiz has been the nerve center of the province for the demonstration, which has started 11 in the morning from the Jardines de Varela and for which buses have been chartered from different parts of the province.

In Jaén, the claims began at 11:00 a.m. from the Blas Infante roundabout and ran through the center of the capital with numerous participants who have gathered in the streets of the Jaen capital to claim the right to public health and quality care for patients.

In Almería, some 300 people have gathered at the Puerta de Purchena, according to estimates by the National Policealthough once the demonstration itself has begun, which ended in the Plaza de las Velas, the number of participants has gradually increased and in Huelva, some 2,000 people have walked the central streets between the plazas 12 de Octubre and Las Monjas , with the participation of the leaders of the convening unions, as well as political representatives and representatives of various organizations.