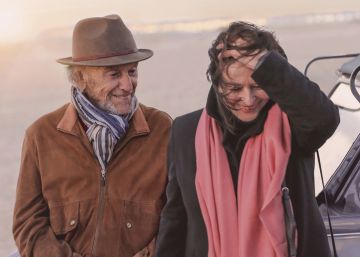 You find many people who like movies, my generation and previous ones, for whom the movie A Man and a Woman It was a before and after about the treatment of love on the screen, a summit of romanticism, an imperishable story. And the other model that does not leave its memory is Love Story It was not my case. I saw them in adolescence and they caused me nothing special. I don't know if at that time I had that pompous and fatuous thing called critical spirit. I just know it bored me A Man and a Woman.

THE BEAUTIFUL YEARS OF A LIFE

I was bothered by such careful images that seemed taken from fancy advertising, the birth of love with his arrogance and fears between script and the race car driver, his deep walks through Norman cities and beaches. He intended to be as lyrical as natural, pure life. And contagious, of course, easily for the recipient to identify. All this accompanied by that cloying music, which relentlessly repeated the "dabadaba, dabadaba". My emotions when talking about love were awakened by another kind of cinema. That which? Well, elementary, dear Watson. Johnny Guitar, In a lonely place, Letter from a stranger, Dawn, Apartment, Vertigo, The Man Who Killed Liberty Valance, The Lifeguard. Painful romanticism almost always, without a vocation as a pastry chef as in A Man and a Woman. Well, for tastes are the colors, which assured someone very rational.

Claude Lelouch, author of A Man and a Woman, He has had the bold and nostalgic idea of ​​getting back together in The most beautiful years of a life to the protagonists 53 years later, to wonder what happened to their lives and their old love. Your proposal involves risks and could be touching. Anouk Aimé is 87 years old (although he appears 20 years younger and with his class intact); Jean-Louis Trintignant 88, and depends on a wheelchair. His fictional character also suffers Alzheimer's, alternates oblivion with lucidity. Vegeta in a residence and is permanently accompanied by a photograph of that woman he loved. Apparently, he was in charge of fucking with his infidelities that relationship he once enjoyed fully. Her son will look for what was the love of his life, convince her to visit that sick, misogynist, caustic man, who sometimes thinks he recognizes her and sometimes returns to oblivion.

It has much merit that Lelouch has convinced the elderly interpreters to retake the old story in a movie with a scent of will, which pretends to be luminous, poetic, even humorous even if the circumstances of the characters are gloomy, in the prelude to death. Lelouch has not had to make too much effort to find production, since half of the footage consists of sequences of A Man and a Woman. I will always love late French singers (and excellent poets) like Brassens, Ferré, Brel (I know I was Belgian) and Moustaki, but the very French songs that sound in this movie do not stimulate me. Lelouch's intentions seem attractive and very human. The result leaves me cold.

Antonio Saura and the crowd that does not applaud | Babelia

Quarantine culture: how to start your children in classical music – La Provincia

Ai Weiwei stands up to Munch, Klimt and Leonardo