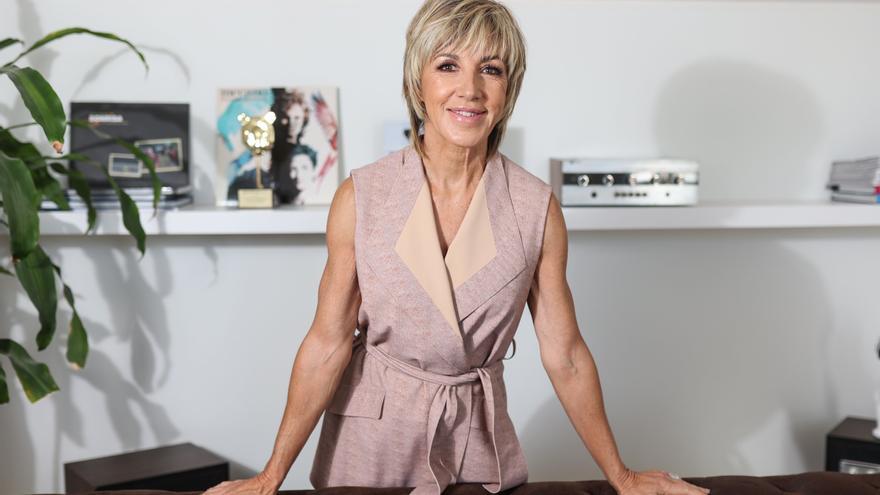 Singer Ana Torroja, who has recently released his new album ‘Mil Reasons’, considers that music “is a wonderful medicine” because “if they have side effects, they are only positive.”

“Music is one of those things that makes you be in the present, that’s why when one goes to a concert don’t think, just feel and live, and that gives you maximum happiness, “tells Efe the singer from Madrid, who is visiting the Tío Pepe Festival in Jerez de la Frontera with her new album this week.

Accompanied by different producers, who have put their personal stamp on these new songs, ‘A thousand reasons is an album “full of worlds and colors”, that has been done “with a long time”, forced in part by the pandemic, but that has allowed “surprises and gifts” such as the single “Hour and room” with Alaska.

“I just needed a reason to put out a new album and the producers have given me motivation, enthusiasm and inspiration. I needed one but three have come out, and there are a thousand on the album “, says Torroja (Madrid, 1959), for whom music has become” a great companion to a pandemic. ”

These days the 40th anniversary of the release of the first single by Mecano, ‘Today I can not get up’.

From the Ana Torroja of the past that illusion survives to do something that, she assures, she loves and is passionate about, although the insecurity that she had at that time from experience has changed.

“We are what we have lived. The good, the bad and the regular, and that’s how I am”, judgment.

Among those Mecano songs that have marked an era is “Woman against woman”, a hymn to the freedom of love that the artist has not stopped singing and that she asks to continue remembering today, especially when we are faced with cases that They have impacted society like the murder of young Samuel.

Back to the stage

After a year without concerts (and with many restrictions), Torroja believes that it is “wonderful” to be able to meet people again and in a land (Jerez de la Frontera and the province of Cádiz) to which she is assiduous and “loves a lot”, she confesses.

An image of the singer Ana Torroja. EP

“This song is still necessary and we must continue singing it for the freedom to love, because, although much progress has been made, there is still, unfortunately and incomprehensibly, a lot of hatred and little tolerance and respect. Life is diverse and so is love. “, affirms bluntly.

For this reason, she encourages the public of the Tío Pepe Festival to receive her next August 5 singing or with a bulería. “It would be very exciting,” he enthuses.

A concert by Ana Torroja is, as defined by the artist herself, “a journey full of successes” where the audience meets “much of the soundtrack of his life”, songs that she chooses herself thinking about what people want to hear, although at the end of the concert she is allowed to open “petitions” and for the audience to ask for a song.

“If someone is left without listening to their song and cannot go home without it, at the end I open the” listener’s requests “and stay on stage singing a cappella whatever they ask of me,” says the artist, who does not doubt in qualifying this final stretch of the concert as a “magical, fun and very beautiful” moment.

“There is nothing that can emulate a live concert, not even streaming”

He sends the public one last message: take the songs who want to hear them written on their mobile or on banners because “if it is already difficult to understand them without the mask, with it, it will be impossible,” he argues.

Although he assures that does not want to get in trouble, regrets that the audience is not allowed to get up from their seats to dance. “I understand that they do not swirl or come together, but if they are all with the face mask Why can’t they get up and dance? “Asks the artist from Madrid when asked about this new normal at concerts.

“That makes me very angry and sad that they are still in their seats. It will be a bit hard for me, but if it is what we have to do, we will be responsible and enjoy that way,” Torroja resigned.

Returning to the stages after a year and a half of the pandemic causes him many emotions and he feels in each one of them “as if it were the first time.” “There is nothing that can emulate a live concert, not even streaming. It’s going to be incredible for everyone, because we need it so much,” he says.

Ana Torroja continues to fill concerts because her music is universal to the point that it has songs that have turned 40 years old and are still as alive as then. “I do not know if we are universal but maybe at some point I will be eternal through my songs,” he concludes.