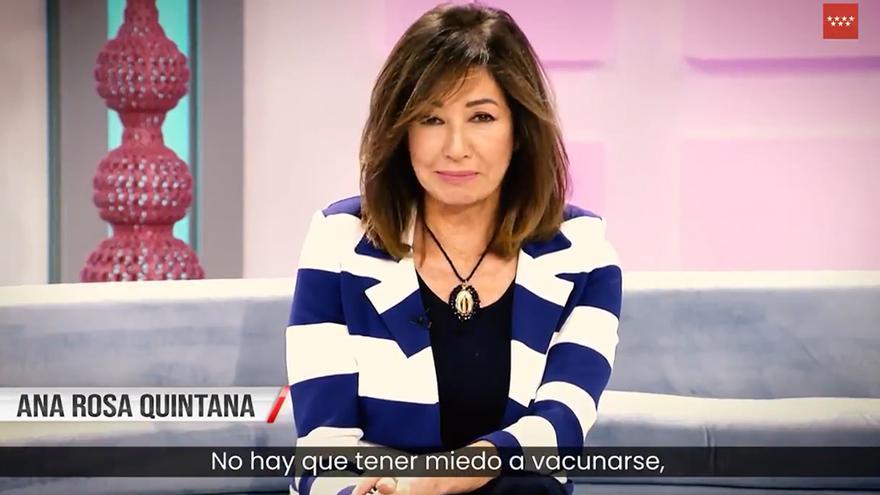 The Community of Madrid launches a campaign to raise awareness that vaccines are safe. After the changes of criteria regarding vaccination with AstraZeneca and the consequent confusion among the citizens, the government of Isabel Diaz Ayuso has ‘recruited’ several television faces in a video broadcast on their social networks.

Carmen Lomana, Joaquín Prat, Lorenzo Caprile or Antonio Resines, among others, they come together to combat the worrying rejection that is emerging towards vaccination.

“You don’t have to be afraid, you have to get vaccinated,” recalls Ana Rosa, while her ‘rival’ in the morning, Susanna Griso, affirms that “the vaccine is the solution.” “It is safe and essential, everyone to get vaccinated”, he adds for his part Belén Esteban.

Isabel Díaz Ayuso, president of the Community of Madrid, has shared the video on her personal account of Twitter, where it has exceeded 40,000 views in just two hours. “Getting vaccinated is safe,” he says on the social network.

Getting vaccinated is safe. pic.twitter.com/N2ALjjs2t8

This campaign comes a few days after the important message shared by José Coronado on television after receiving the first dose of AstraZeneca. “It is the best, it is the one that has the least side effects. It has been proven,” he said before the laSexta microphones.

The actor, whose speech went viral on social networks, indicated that “we have to trust our Health and stop speculating with hoaxes and rumors.” “We have to get the vaccine that they give us”Coronado added. In a connection with TVE, he also left a message for the media: “It is you who have to cheer”.