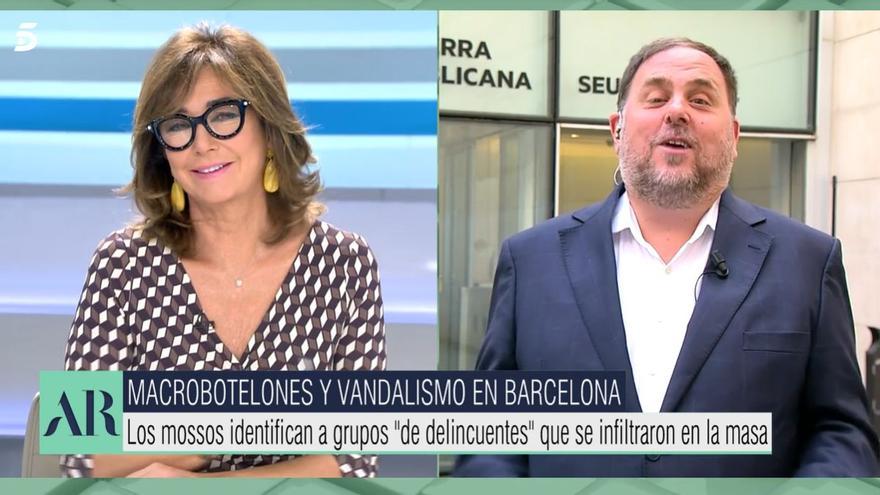 Like the rest of the morning, 'Ana Rosa's program' It continues to be very aware of the evolution of the La Palma volcano. But the Telecinco format has not left politics aside either, analyzing this Monday the situation in Catalonia and the release of Carles puigdemont after his arrest in Sardinia. In addition, the presenter has chatted live with the leader of ERC, Oriol Junqueras.

In the interview, Ana Rosa asked him if he considered traveling to show his support for Puigdemont. "I have not thought of traveling by mere chance. This week I had the opportunity to be in Corsica, at a meeting of various European parties. It was relatively close, but when the arrest occurred, I had already returned to Catalonia and had other obligations", explained the former vice president of the Generalitat.

On the other hand, Junqueras has pointed out that negotiation is "the best way to resolve the political conflict between Catalan society and the Spanish state". "One way to illustrate it is to ask ourselves what is the alternative to dialogue and agreement. I think the alternative will be clearly worse," he pointed out during his speech on Telecinco.

15 minutes after starting the interview, the journalist was forced to cut it off due to lack of time: "It has been a pleasure talking to you, but since we always get so involved, we have to go almost to advertising." At that moment, Junqueras has expressed his desire to go to the Telecinco facilities: "Let's hope that one day we can meet in the studio and have time to talk more calmly. Let's see if we get it.".

However, Ana Rosa has revealed that the ERC politician has been invited to the set on other occasions: "That's what I say. You resist me, eh?". "Well, it is difficult to balance schedules. Besides, so many things happen at the same time ...", defended Junqueras before the journalist insisted on her proposal: "No, no, I am here every morning from Monday to Friday . You are already invited. "