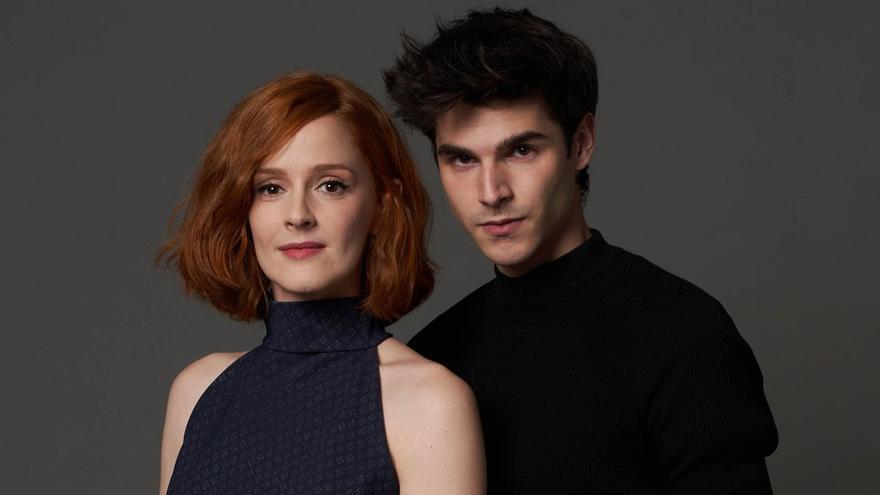 The character of Álex comes to the actor who gives him life like a glove. Because Alvaro Mel (Salamanca, 1996), an 'influencer' with 1.2 million followers and little experience in acting ('The other look 'and' Mothers. Love and life') is as inexperienced as the diplomat of 'La Fortuna', the first series of Alejandro Amenábar. Ana Polvorosa (Getafe, Madrid, 1987), for his part, faces his roles ('Aida', 'Loving is forever', 'Love is forever', 'The cable girls') with the same passion as Lucía, the mission to recover the Spanish treasure. In addition, a deep friendship has also grown between the actors.

-Álvaro, says that it was difficult for him to control his nerves before Amenábar in his first meeting with him.

-TO. M .: I was very nervous. We met at his house to see how we could build the character. I asked for water and when I picked up the glass, my whole arm was shaking and I couldn't drink.

-It identifies with the character as a rookie. Because you have a great experience as an 'influencer', but not as an actor.

-TO. M .: Social networks at the moment have nothing to do with it. With the little career I had as an actor, suddenly being involved in a production like this ... I empathize with Álex: he is inexperienced at the head of that operation and I am at the head of this production.

-Ana, you have a serial career. Has it been very different to work with Amenábar, a filmmaker who had only made movies?

-AP: I have noticed that we have shot six episodes in six months. The experience that I have is not that of recording one chapter a month. And the production has been to the millimeter. There is a curious detail, for example, and that is that we had double lights.

-Alvaro, you don't have much to compare with, but were you aware that you were up to something big?

-TO. M .: Yes. That it was an incredible production. I can't compare, because my acting career is tiny, but you have to start with something ...

-AP: You have to start with something, he says! (laughs)

-TO. M .: Everything is taken care of to the smallest detail, everyone was watching us. I doubt that this will happen again. I know it is not always like this.

-It started from the top. Is Amenábar very demanding?

-TO. M .: Alejandro's work speaks for itself and there is a demand and a perfectionism. It is also true that this demand is accompanied by tremendous humanity and delicacy and a way of doing things very calmly. With what is a good mix. Demanding without arrogance. A good demand worked from the calm and from the good energy. That is what has characterized the filming and what characterizes Alejandro.

"In 'La Fortuna' there are so many genres, that there are at least two that you like, for sure"

-The series has been shot in English and Spanish. But you, Álvaro, also spoke in Korean.

-AP: I feel very proud of him, because with the melody everything changes: if it is higher or lower, the meaning of the word changes. It seems very complex to me, come on.

-TO. M .: I have done it phonetically, like Karra Elejalde with English.

-Is English not a problem?

-TO. M .: We have had the help of Marjorie, a wonderful 'coach'. And it is taking a step further, because interpreting in a language that is not yours, handling listening, silences in English ...

-AP: It is a challenge. He is much more fluent in English than I do, but I have learned a lot, because I can get more jobs in this language.

-Is it more difficult to be inspired by a comic than a book?

-TO. M .: The other way around. When we saw that it was inspired by a comic, the first thing we did was buy it from ourselves and devour it. There is a factor: that there are images and they help you to visualize it better. Then, in the comic the daily life of the characters, the hidden heroism, is well reflected. The truth is that the comic cost very little to read and helped a lot.

-AP: Besides, regardless of the story, it's a good comic. It helped me a lot to read it before.

-Are you consumers of the adventure genre?

-AP: I do not consume that genre.

-TO. M .: What happens is that in this series there are so many genres that it doesn't matter if you are a consumer of one genre or another. There are at least two that you like in the series, for sure.

-And there is a love story between two very different people.

-TO. M .: That love between two opposite people is given by a love towards something very specific: the two pursue an end, which is to defeat Atlantis through trials, and sharing that path together forces the two to put aside their prejudices and do for empathizing. Get out of the bubble and understand the other. They spend a lot of time together, since they have been with the case for two years, and there love arises. It is not a previous love story. The development of love for the common good is beautiful.

-AP: In the end they are two very opposite people in terms of ways of life and ways of seeing things and political ideas, but throughout history they leave behind their prejudices and begin to know themselves much more thanks to having the other opposite. And they begin to respect, value and admire what the other has. They complement each other very well and they end up loving each other. From a romantic love plane, but also as partners.

"Álex and Lucía are very opposite, but they leave behind their prejudices and end up loving each other"

-Has Ana been a great support?

-TO. M .: Working with Ana has been incredible. We have spent a lot of time together and I have learned from her both professionally and personally. I have little experience and learn from someone like that ... It was a gift.

-AP: Although I have more experience, I have also learned a lot from him. You have a lot of intuition. His character was as integrated into him, it was part of him, he blends in. It's tricky when you tackle the main character in a project like this. The responsibility and weight behind him and how Álvaro has handled it is to be respected, valued and admired. I am very proud.

-What is there beyond 'La Fortuna'?

-TO. M .: I made a very small character in the second season of the series 'Paraíso'. Now we are with the promotion of 'La Fortuna' and for the moment calm. Slowly.

-And you, Ana, who do both television and film or theater?

-AP: Right after filming I shot a short 'Landscaper', produced by Mesala Films, my representatives, and I'm going to shoot a horror short, because I haven't done anything scary. And I have started shooting 'La piedad', Eduardo Casanova's second film.

-You have a great friendship with him, since you worked together on 'Aida', right? Because he already participated in '' Skins', his first film.

-AP: Yes, I love him very much and I admire him. Being with him is a luxury. They were already recording, but I just joined. There is movement and a lot of work.