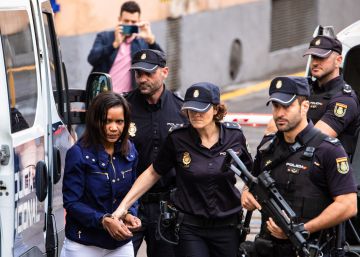 Upon delivering to the popular jury the 22 pages of the object of verdict yesterday Wednesday, Judge Alejandra Dodero reminded them of two fundamental ideas of the Spanish legal system. "Every person is innocent until proven otherwise," he proclaimed solemnly and then: "In dubio, pro reo, that is to say, that in case of doubt, they should always favor the accused ”, a warning that wanted the nine citizens chosen to decide on crimes as sensitive as those facing Ana Julia Quezada take into account. They are summoned only in criminal courts when homicides, threats, omission of relief duty, burglary, bribery or embezzlement of public flows are judged.

The jury must answer the 142 questions that the judge has asked them and vote aloud, an act to which they are obliged under a fine of 450 euros. For each one of the “unfavorable facts”, that is, those that accuse the accused, seven votes out of the nine are needed. For the "favorable", those who point out their innocence, five. And all the answers must be motivated. "Have no qualms about spreading," he recommended. Once their work is completed, they will deliver to the magistrate the minutes signed by all of them. If some of the questions have not been answered with reason, the document will be returned.

The enormous responsibility that the seven women and two men have assumed consists in deciding Quezada's guilt or guilt regarding the five crimes of which he is accused. All live in the province of Almería, have no relationship with the family of the child or with the accused, as marked by the jury law. They do not have mobiles or can communicate with their families and relatives. They eat at the Audience, and when, at the end of the afternoon they leave the building, they walk to their hotel escorted by four policemen.

Inside the dim space in gloom where they remain locked around a rectangular table they will trace the fate of the woman who has accompanied them each of these last days. They have seen her come handcuffed, sob, cry, or stay with her hands clasped and her eyes lowered. They have sat in front of their image with glasses and a red sweatshirt at the scene of the crime and with their hair straightened, dwarfed and oblivious to their own identity in the reconstruction of the facts. They have heard dozens of witnesses and experts talk about what she did and what she had in her purse, followed her movements and heard their conversations. They have been shown the shovel and ax they found on the estate of Rodalquilar, a hippie mecca in Cabo de Gata where the boy never left alive.

Signing the future of this woman is to decide with all these tests, reports and testimonies if little Gabriel died because Quezada tried to silence him, as he shouted during the trial, or if he killed him with utmost cruelty, prolonging his agony. If it caused the parents of the child an extraordinary suffering by hiding their crime and encouraging them with the promise that they would find their son safe and sound, if any lost in a nearby place. The difference is to spend three years in jail or stay locked up for a lifetime.