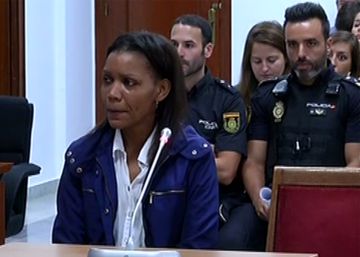 The second day of the trial against Ana Julia Quezada for killing the little one Gabriel Cruz He started this Tuesday morning with the confession of the murder. With a brief "yes", the defendant has answered the first question of the prosecutor Elena Fernández Lora, who, directly, has snapped if she "killed the son of her sentimental partner." On the question of whether he pleads guilty or innocent, he has indicated that he is "innocent" and has warned that he will only respond to the Prosecutor and his defense. Quezada's daughter, who also declares Tuesday by videoconference from Burgos, has asked not to see her mother, that the camera does not focus.

"I saw Gabriel with an ax. I told him: 'Let her you can hurt yourself.' He started shouting: 'You don't send me you're not my mother. You're black, ugly, you have an ugly nose, I don't want you to be with my father. I want my father to marry my mother. I want you to go to your country. "Squealing all that. I just covered his mouth, he didn't want to hurt the child. He just wanted him to shut up. He didn't want to kill. to the child, "said Quezada. At that time, the defendant has collapsed.

Quezada has related how they arrived at the farm, opened the gate and parked the vehicle next to the house and the pool. "The boy gets off and stays around in the garden. I get off, I remove the alarm with the device. I raise the blinds, open the doors. Then Gabriel entered through the middle room, whose door was open to ventilate, which overlooks the pergola area and a small pool, "he said. Then he saw Gabriel with the ax.

"The words that stayed with me are that you are black, that you do not send me, that you are always sending me. He held the ax with one hand. Then everything that happened happened," he continued. To the question of whether he remembers having removed the ax, Quezada has replied: "I don't remember." Then he added: "I put my right hand in my mouth and nose. And the other hand, I don't know if in the chest, the neck … I don't know. I just know that I put my hand in my mouth. and the nose to stop telling me those things. I don't know where I put the other one, on the back of the neck, the forehead, the face … they were very fast moments, I was very nervous. "

The defendant also does not know if she pushed him against the wall or floor. "I was very nervous, I just wanted him to shut up. I cover him with my hand, the rest I don't remember. Only, after that, the boy did not breathe. When I let him go, I put his hand on his chest and he did not breathe. And I I stood, locked. " Then he stayed for a while on the farm. "I started smoking like crazy. I went out, in, out, in. I didn't know what I was doing. At that time I smoked four, five, six, seven, eight cigarettes," he continued. At that moment, "I see a shovel and decide to make a hole." "I left the child and went out to make a small pit with a shovel that was in the garden. We were going to use that shovel to fix the garden, like the ax and other tools."

Then, he took the boy out and put him "in the hole" and returned to the room for the ax because he had "a little hand out to Gabriel." He hit several times, but could not continue. "So I covered it with earth," he said.

On the boy's shirt, which she placed in a place away from the place of the murder to confuse the Civil Guard, Quezada has assured that he left her there because she wanted to be arrested. "I wanted to be taken, because I was not able to say it in my own words, I wanted to be caught," he said. These statements contradict those he made before the investigating judge, where he said he did "because he wanted to give hope" to Gabriel Cruz's father.

Another novelty has occurred when Quezada explained that at the time she was arrested by the Civil Guard, she intended to take the body of the child to the garage of Puebla de Vícar and then commit suicide. His intention was to "leave Gabriel in the garage, go home and write two letters," one for Angel and one for his daughter, explaining what had happened. "Asking for forgiveness. Leave my dog ​​in the kitchen with water and food and the door to the open terrace. And take all the medications I had, take them and throw me on the couch," he said.

Despite Quezada's refusal to answer his questions, the private prosecutor, Francisco Torres, wanted them to be recorded. He has raised how Quezada explained the massive cerebral hemorrhage that appeared at the autopsy, if Gabriel helped him get the shovel and ax out of the car, and if he had tried to poison Gabriel in advance or dismembered the body.

The defense has been interested in the reason he did not call anyone when the events occurred. "I was paralyzed, I touched the child, I saw that he was not breathing and I was blocked. I did not know what to do," he said.

This Tuesday's session will be extended in the morning and afternoon, because they will declare 10 more people. Among them, four direct relatives of Gabriel: his parents, Ángel Cruz and Patricia Ramírez, his cousin Mabel, and Carmen Sicilia, grandmother of the eight-year-old boy. They will do it behind closed doors, without the presence of a press or television signal. Also separated by a screen: the family has asked not to have eye contact at any time with Quezada.

The woman, 45, has arrived minutes before nine in the morning to the Provincial Court of Almeria. He faces a permanent prison sentence that can be reviewed for assassination with murder requested by both the Prosecutor's Office and the private prosecution, in addition to 10 years for two crimes of psychic injuries to the parents. A popular jury, consisting of seven women and two men, will decide on the penalty.

The judicial process started Monday under great media expectations with the conformation of the jury and the reading of the previous reports by the prosecutor, the private prosecution and the defense of the main accused. Gabriel's family lawyer said the child was dying between 45 and 90 minutes since his alleged murderer gave him the first blows until he suffocated him.

Canada announces its first case of the new coronavirus in Toronto

ISGlobal and «la Caixa», against malaria