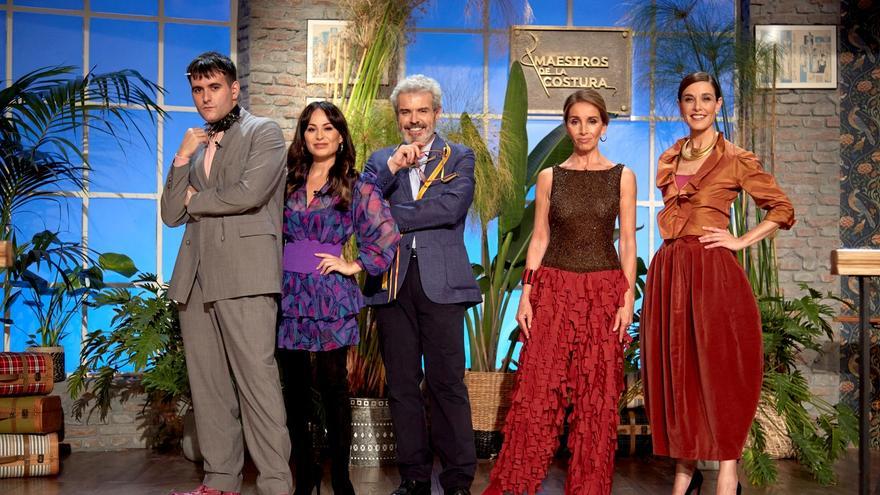 Madrid, Feb 2 (EFE) .- A dazzling Ana Belén dressed as Jesús del Pozo arrived smiling at “Maestros de la Costura” where she paid tribute to the Madrid designer, a workshop that Paco Clavel, the “king of recycling”, also visited. a wardrobe made from a plastic bag and accessories from cassette tapes.

The second program of this new edition of “Maestros de la Costura” has paid tribute to Jesús del Pozo and his muse, the actress and singer Ana Belén, attended the workshop to reveal unique moments of creation that he lived with the designer, but also his skill in sewing that helped one of the apprentices.

“My life has been linked to Jesús del Pozo and it means a lot to me to be here,” said Ana Belén, who wore a red trouser jumpsuit and a bright brown top from Del Pozo, whom she met when she began to design women’s clothing , after establishing itself in masculine design.

“From the first moment there was a connection”, commented the actress, who has told how he dyed the fabrics himself in his workshop.

The apprentices have paid tribute to Jesús del Pozo, who this year marks the tenth anniversary of his death, choosing some of the pieces worn by Raquel Sánchez Silva, Ana Belén and a green dress on a mannequin. A test that they had to perform in pairs.

In the tour of the workshop, Ana Belén confessed that she sews since she was little, a skill that the presenter has used so that the actress was the partner, for a few moments, of Álvaro, the contestant who, being an odd number, had been left without a partner , and that he couldn’t contain his excitement. The best gift on your last day at the sewing “talent”.

During her stay in the workshop, the singer could not avoid humming some verses of “Agapimu”, at the request of two of the apprentices, and a fun brushstroke of “Long ago that I come to the workshop” from Pablo Sorozábal’s zarzuela “La del bunch of roses “, when Caprile, who participated in the test, jokingly reproached him for not helping him.

The team event did not go well for the contestants who traveled to Toledo to visit the Puy Du Fou Historical Entertainment Park, where they had to make the costumes for a great show, replicating the costume of King Alfonso VI and his royal knight, and the clothing of their horses.

The bad result led to expulsion, for the first time in the history of talent, for the second time in a row in this edition to both teams, as Caprile highlighted in a very angry tone. The seamstress threatened that it would always be the case if the apprentices did not change their attitude. “I want you to leave your skin,” he yelled.

However, the jury allowed each team to save one of its members. Nani, the captain of the orange team, who already revealed a good strategy when creating the group, decided to save herself.

“I have not come to make friends, I have come to win,” he said without any remorse, although -contest things-, finally his decision did not help him and he had to exchange with Fermín, the weakest apprentice.

In the next test, Paco Clavel, the “king of recycling”, as defined by the judges, came to the workshop to inspire the apprentices to make garments from recycled home textiles such as cushions, crocheted blankets or rugs that were used to make blouses and dresses.

A test that led Álvaro to say goodbye to the workshop as his garment was not up to the level of his colleagues, according to the jury.