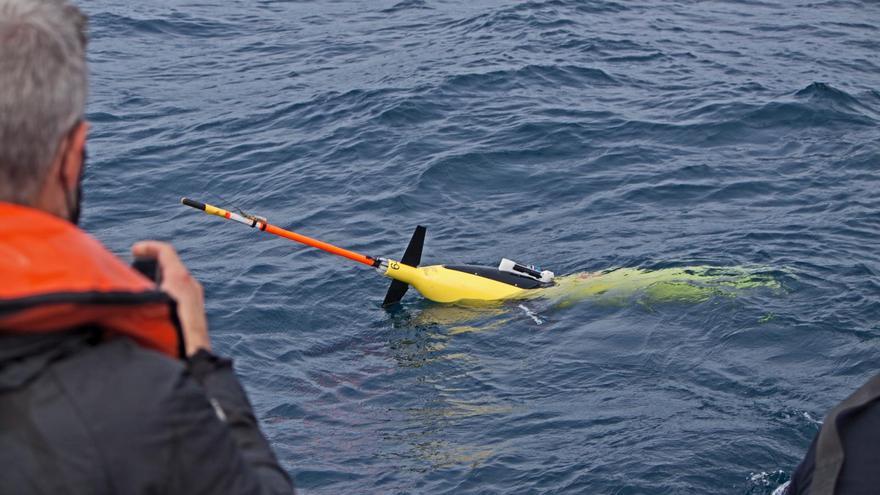 An autonomous submarine glider from the Canary Island Ocean Platform fleet (Plocan) monitors for a month the waters of Fisterra (A Coruña) in the framework of an ocean observation scientific mission led by the researcher Manuel Ruiz-Villareal of the Spanish Institute of Oceanography (IEO) in A Coruña.

The launch of the glider, on the occasion of the European project ‘Innovation in the Deep Atlantic Ocean Framework (iFADO)’, has been carried out from the oceanographic vessel Lura, belonging to the IEO fleet. Following the appropriate initial verifications, the autonomous device will head southeast for about fifty nautical miles.

In a statement, the Canary Islands Oceanic Platform explains that the submarine glider has a specific oceanographic sensorial configuration designed to collect data on essential physical variables (temperature, conductivity and pressure) and bio-chemical (dissolved oxygen, chlorophyll and turbidity). ) from seawater to a maximum depth of 1000 meters. With this, the aim is to better characterize the study area.

The mission tries to help fill the gaps in marine observation that exist in the deep Atlantic Ocean. To this end, the study will continuously and at high frequency follow the phenomenon of deep water outcrop through the continental slope, which in summer generates filament-shaped structures, highly productive in shallow areas of the water column, whose study is of high interest and associated impact in sectors such as fisheries.

The IEO has been developing the ‘Radiales’ marine observation program since the late 1980s, which establishes a series of fixed stations on the coastal platform throughout the Spanish geography in which a set of hydrographic and biological parameters are sampled monthly.

With the aim of extending the sampling to the oceanic zone, in 2003 a time series of specific campaigns began, including six-monthly hydrographic samplings in two standard zones perpendicular to the coast of Fisterra and Santander, covering the entire water column up to about 5000m deep. . In addition, iFADO is a four-year project, funded by the European Interreg Atlantic Area program in its 2016 call.