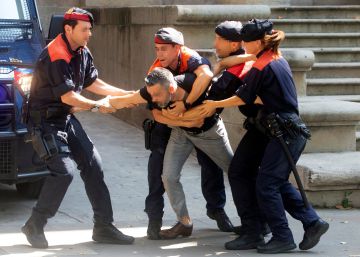 Suspended trial, but a lot of tension at the gates of the court in Barcelona for what is known as the case of the herd of Manresa. The court of section 22 of the Audiencia de Barcelona has suspended on Wednesday the statement of the minor who allegedly was sexually assaulted by six young people in turns at a party in 2016 when she – who was then 14 years old – was drunk. That has been inside the room. Outside, the Mossos d'Esquadra have had to intervene when an uncle of the young woman, Paco, has tried to pounce on the accused, knocking down even one of the agents who tried to control him. The court has suspended the hearing of the case after a lawyer was absent on the death of her mother. The victim will declare next Monday.

The Office of the Public Prosecutor of Barcelona imputes a crime of continued sexual abuse to six of the accused due to events that took place at 23.30 on October 29, 2016 in an abandoned factory in Manresa. There was a party in which several young people, some minors, drank alcohol and smoked, according to several statements, a large amount of marijuana. The Prosecutor's Office considers that one of the accused, Bryan Andrés M., taking advantage of the fact that the victim was under the influence of alcohol, took her to an abandoned house next to the place of the party and penetrated her. Then he returned and incited another defendant, Walter Diego C .: "Go, it's your turn, 15 minutes each. And do not delay. " The public prosecution maintains that from there they entered the house and abused the victim, in turns, a total of six adults while a seventh watched the scene and masturbated.

The Prosecutor's Office, in its provisional writing and pending what the child declares, charges six of the accused with a crime of sexual abuse and requests penalties of 10 to 12 years. For a seventh defendant, who according to the accusation masturbated while contemplating his companions, asks for a fine of 4,320 euros for not preventing them from raping the girl. The Public Ministry repeats what happened in the case of the Pamplona Manada, when they were accused of abuses instead of aggression because they understood that there was neither violence nor intimidation, because the will of the victim was nullified by the consumption of alcohol or drugs. The Supreme Court amended on June 22 that qualification in a judgment qualified as historical.

In this case, also the particular accusation, exercised by the victim, qualifies the sexual assault attack, on having understood that the minor was intimidated and subjected by violence, which raises the petition to a sentence of 15 to 20 years in prison. In the early morning of this Wednesday, a dozen people, among whom were relatives of the victim and feminist activists, have gathered at the doors of the Superior Court of Justice of Catalonia demanding, as already happened with the case of the Pack, which will change the tax qualification from "abuse to violation".

All the defendants knew that she was a minor under 14 years of age and that she was under the influence of alcohol. After the rapes, one of the participants, Marco Antonio R., exhibited a blank gun and warned those he considered could be witnesses that if they told what happened they would have problems. Hours later, two of the accused returned to rape the minor. This Tuesday, during the first session of the trial, the seven accused denied the facts outright.

This Thursday will continue the oral hearing in which the experts who participated in the investigation of the case will testify.