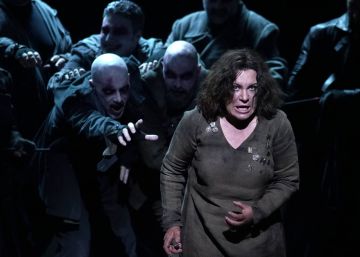 Il trovatore it is a title based on orality, between a vicissitude that practically counts more than acting and the display of passions and tears. And as an opera of orality, it needs high-voltage voices. It has been said that Il trovatore he only needs the four best singers in the world, some attribute it to Caruso, others to Toscanini. But more than a compliment, it seems a curse, to mount an ambitious production of this opera seems impossible, who are the best four? Is there something like that?

In any case, ride Il trovatore it leaves, in our days, of the canon to the use: much theater, singers excels but sufficiently depersonalized and a good dose of update of the generally leaded history. The history of this opera, with its gypsy from Vizcaya, its count of Aragon, its corresponding gypsy curse, its exchange of children who, when growing up, are confronted by a woman who, obviously, is killed without knowing, neither she nor anyone except for the gypsy, who are brothers … all this has a very problematic update and almost as inconsistent as the original story. But here everything is to listen and enjoy one of the most wisely vocal operas of Romanticism.

The stage director, Francisco Negrín, has opted for an abstract space, an empty cube, a bit like the venerable montages of Wieland Wagner, and in him the characters evolve as guided by the song. It is an elegant solution that releases all the vocal power of the work.

The obligatory review of the cast could be led by Azucena, the gypsy, the great dramatic discovery of the opera. Your voice, a mezzo of wide register with serious cavernosos and incursions to the acute one that seem to request the impossible thing to its registry, it has in its mysterious sonority the key of the drama. In the first distribution of this production, the premiere I attend, highlights the Belarusian Ekaterina Semenchuk, a mezzo that is taking over the character in different international theaters. Excellent, mysterious and dominadora of the demanded vocal recesses, Semenchuk gives a good lesson of how to tame so difficult role.

Manrico, the troubadour and false son of Azucena, is another of those roles loaded with misunderstandings. It has a lot of belcantismo and that situation begins to be hegemonic, since a good bel canto, with a couple of gestures of bravery, is done with the role without betraying the Verdi spirit or leaving the glottis in the effort. That's the profile of the Italian tenor Francesco Meli and he handles himself very well in such a paradigmatic role. Leonora, the soprano, has a trait of delicacy and sweetness that does not require contradictory vocal records, although elegance and good technique. The Italian Maria Agreste has them and is done with the interest of the public from measured boasts of musicality and balance.
The quartet of aces is completed by the French baritone Ludovic Tézier, who here takes the role of the bad guy, Count Luna. His moments of brilliance resolve them with integrity and leave no room for weakness. In short, a vocal quartet of great height that leaves this production as a reference for this problematic opera.

The Italian director Maurizio Benini he leads the orchestra from the prudence and good work of those who have grown up with this repertoire and the orchestra follows him as much as the choir that, in his famous moments, becomes the protagonist. In short, a vocal and musically excellent production, marked by sobriety and a bit of scenic reluctance, but that complies with what is asked. A good job to show that also the Verdian repertoire maintains the high note that has reached the season that ends at the Teatro Real.