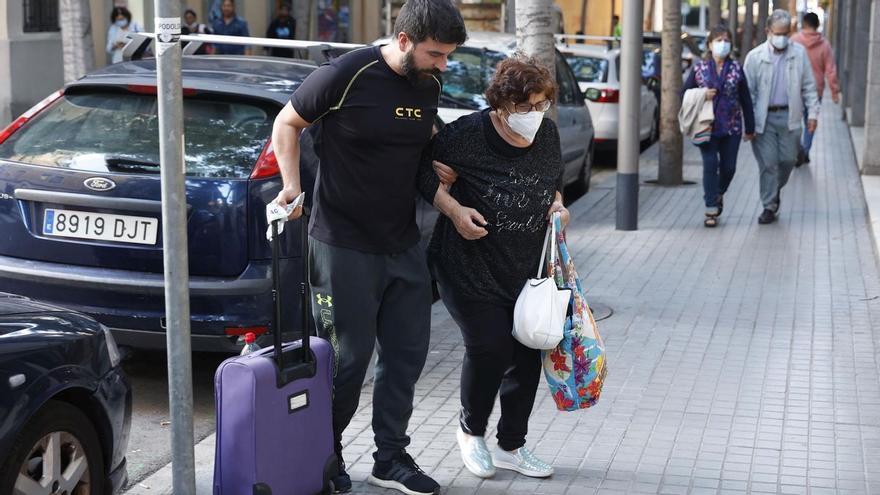 Since he moved from Paris to Barcelona, ​​Piras has not seen his mother for a year due to the coronavirus pandemic. On October 30, Seriana Tiddia was finally able to travel to Barcelona for the first time. “The first leg was great, everything was correct: we hired the assistance service at the airport, I went to look for her … Everything went well, “says Piras. The drama happened on the return trip, flight VY6166 that had to take her back to Cagliari (Sardinia) this Thursday.” They have locked up and abandoned my mother, an older woman who needs support, “the son lamented.

At the beginning of the week, Piras hired an assistance service for people with reduced mobility. “My mother does not understand Spanish and cannot walk very much, as I could not enter Terminal 1 at pandemic restrictions, I thought that with the assistance it would be solved “, says the son, who at all times was in telephone contact with his mother in El Prat. “The assistants took her to check in, got her boarding pass, left her suitcase and went to the boarding gate to catch the flight,” she continues. The family says that they arrived in El Prat at 12 noon, and the flight, operated by Vueling and heading to Cagliari, left at 2 pm.

Three hours through the terminal

But at the gate the woman failed to get on the plane. “We still do not understand the reason: he had the ticket, all the documentation in order and he was two hours before with the assistant,” insists the son. Aena sources confirm that the family had contracted this service and that the woman was unable to get on the plane. “From here the assistants took her to the Vueling counter to buy another ticket for the next day“explains the son, who claims to have been in contact with the assistants.” I refused to buy another ticket, but the assistant told me that she was leaving, that she had to attend to other people, and she hung up on me, “says Piras.

“During all those three hours my mother was wandering alone at the airport. Neither the policemen (both the Mossos and the Civil Guard) helped her. Finally, at six in the afternoon another assistant who had just come to work He hailed a taxi for him to come home with me“Piras continues.” She has been alone, abandoned, no one has taken care of her, we are talking about a diabetic person, elderly, with problems walking … what is this, the third world? “Piras complains, who is willing report the treatment received to the Mossos. In addition, they have had to pay 62 euros for the new ticket purchased online and 33 euros for the taxi.

On the other hand, from the El Prat Airport they deny that they did not provide the contracted help. “The passenger has been at all times with the assistance person, who once arranged the flight for tomorrow they have taken her to a taxi to her son’s house,” they say from Aena. “This is flatly false,” insists Pari. For its part, Vueling says “it is very sorry for what happened” and, a day later, it “continues to investigate” the events. This Friday Tiddia managed to board the flight back home, although the assistance, assumes the son, turned up half an hour late and could not cope. “A girl with two elderly people in a wheelchair asked me if I could help her,” Piras complains. The son has already requested a claim sheet, is preparing a criminal complaint for abandonment and did not give aid to his mother and has communicated to the Consulate of Italy the treatment received.