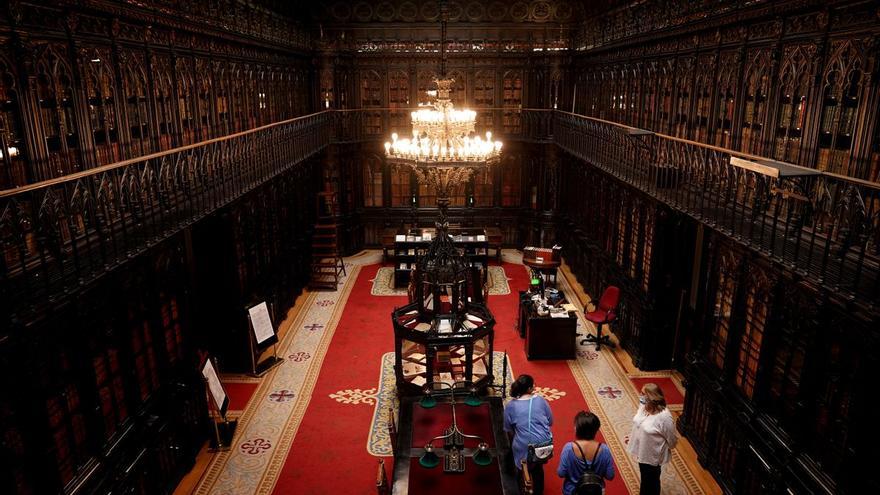 On Wednesday of last week, as part of his visit to Madrid, Jae-in went to the upper house. First, he gave a speech. Afterwards, he visited the Library, a neo-gothic style enclosure, full of old works on iron shelves, with narrow spiral staircases, through which a dim light through the roof windows. The South Korean president was shown two books. Some illustrations of Rubens. He hardly stopped at them. A atlas with a map of the Kingdom of Korea in the 18th century, prepared by the geographer and cartographer Jean-Baptiste Bourguignon d'Anville. Here things changed.

"I think this can be very interesting for Koreans," one of the people in charge of the library told Jae-in, Ángel González Lara. He was right.

Jae-in took off his glasses and examined the map. There appeared a small island: Tchian-chan-tao, name in Chinese, and misspelled, of the Rocks of Liancourt. It was drawn much closer to the mainland than it actually is. But that was the least of it. The Korean president announced that the Senate map showed, without any doubt, that Liancourt had always been part of Korea.

The librarian González Lara, who has gone from having an almost clandestine presence on the internet to being quoted by the South Korean media, does not want to speak. "Officials do not speak to the press," explain Senate sources, who still agree to give explanations about what happened. In an office of the Upper House, they present the defense evidence. The message they convey is that the Senate must stay oblivious to the Asian dispute, which showed the map because in this type of official visits they always remove from the archive specimens that may result "Attractive or curious" to the dignitary on duty, but who never thought it would be used as part of the fight between Japan and Korea. Because the map, after all, is from public domain. Then they deliver three stapled and printed sheets that reflect (with links included) that Bourguignon d'Anville's work is translated into English and German, which can be consulted in digital format through the Harvard and French National libraries. , which is even possible to purchase online: it costs 28 euros. “It is not a secret document, nor is it unique. It's just a book ”, they point out.

But everything that has to do with the Liancourt Rocks (known as Dokdo in Korean and Takeshima in Japanese) is sensitive material. They are just two islands of volcanic soil with an area of 0.19 square kilometers, inhabited by a married couple, 37 South Korean policemen and no trees. The sea that surrounds them is abundant in fish, and it is believed that there are also rich deposits of natural gas underground. Japan and Korea have been in dispute for more than three centuries, with both parties claiming that they have historically always been theirs. Hence the supposed importance of the Senate map.

The conflict has seen highs and lows in recent decades, with South Korea dominating the rocks, organizing military exercises and excursions in which hundreds of tourists simply wave the national flag and shout. "Daehanminguk manse!" (Long live the Republic of Korea!), Because there is not much else to do there either. Now, coinciding with Jae-in's visit to Spain, the territorial battle goes through an especially tense moment, after Japan placed the Liancourts on a map of the Olympic Games, as part of its territory. Faced with this affront, several South Korean politicians defend boycotting the sports event, which in principle, if the coronavirus allows it, will be held at the end of July in Tokyo. The drastic response is supported, according to a recent poll, by the 53% of the population from the country.

The islands are of enormous importance to South Koreans. Much more, for example, than Parsley for the Spanish. In 2018, during a dinner for Jae-in and the Supreme Leader of North Korea, Kim Jong Un, For dessert, a mango mousse was served with a chocolate map of the peninsula, adorned with a small detail in the shape of the Rocks of Liancourt. Perhaps at the next summit of this type the Senate will also appear. Who knows. In the Upper House, meanwhile, they hope that the controversy will dissipate soon, and that it will serve, at least, to make their Library more known. Not only in South Korea.