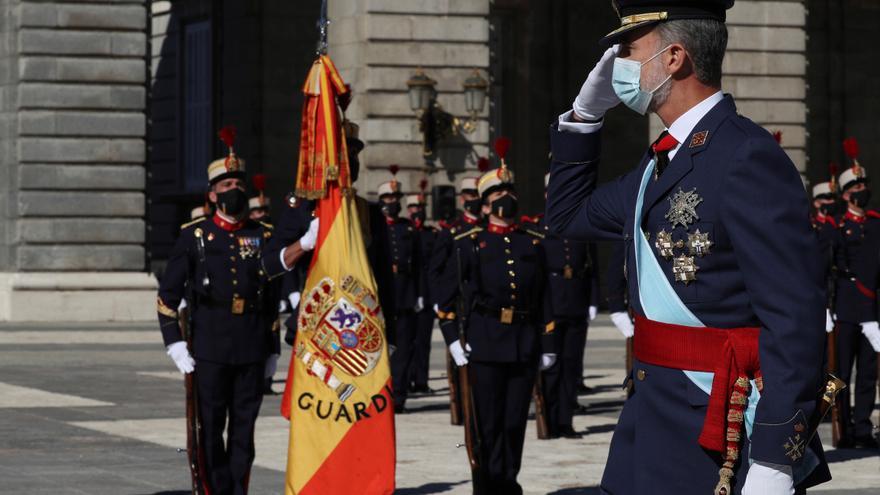 Without the usual military parade or the traditional reception at the Royal House, the main authorities of the State participate this Monday in the Plaza de la Armería of the Royal Palace of Madrid in a sober act of celebration of October 12 marked by the pandemic that arrives in the middle of a unprecedented political battle between the government and the PP, precisely for the management of the health emergency in the Community of Madrid and for the health of the monarchy.

The king presides over a brief military ceremony in which the protagonists of that unusual war whose epicenter is the capital are present, the main focus of the second wave of the pandemic, which is confined by the high number of infections and deaths as a result of a Government decision – that on Friday he was forced to declare a state of alarm in Madrid and eight other municipalities in the region – harshly criticized by the Madrid authorities, with its president, Isabel Díaz Ayuso, at the head, and by the leader of the PP, Pablo Casado.

In the Plaza de la Armería it has been possible to see the monarch, Ayuso and Casado, as well as the Government of Pedro Sánchez in full. For the first time, the members of the United We Can Executive, such as Vice President Pablo Iglesias or the Minister of Consumption, Alberto Garzón, the two leaders who in recent weeks have been in favor of opening the melon have attended the events on October 12 constitutional to explore the possibility of replacing the parliamentary monarchy with a Republic. Several dozen people have gathered outside the Royal Palace, shouting slogans such as “Long live the king” or “Government resignation”.

The military act was also preceded by the publication of a survey on the monarchy, based on more than 3,000 interviews, which indicates that 40.9% of Spaniards would support the Republic in a referendum, compared to 34.9%. % of the population that would opt for the monarchy. That poll, Powered by the Independent Media Platform and prepared by the 40dB opinion institute, also places the confidence of the Spanish in the monarchy below the approved with 4.3.

Early in the morning, the leader of the PP, Pablo Casado, wanted to counteract this poll with a new closed support for Felipe VI, whom, in his opinion, Sánchez and the PSOE do not sufficiently defend against the alleged “attacks” of his colleagues from United We Can Executive. “Happy Columbus Day, one of the most important milestones in the history of mankind. Happy Feast of the oldest Nation in Europe and one of the most relevant in the world. What pride to be able to say long live Spain and, this year more than never, long live the King, “said Casado in a message on Twitter.

Sánchez, for his part, was trying to launch a message of unity at a time marked by political division. “East #October 12 °, different because of the pandemic, let us remember more than ever what we are. A caring, open, plural Spain that progresses without leaving anyone behind. Let’s move forward together for the common good, with hope to win our future. Happy National Holiday “, he pointed out in another tweet.

One of the images left by the brief military ceremony has been that of Vice President Iglesias speaking with the president of the General Council of the Judicial Power (CGPJ), Carlos Lesmes, a conversation that takes place after weeks of tension between the leader of United We Can and the highest head of the Judiciary, who remains in his post on an interim basis two years after his term ended, due to the blockade of the PP to the renewal of the highest body of judges, where the conservative magistrates have an absolute majority.

Conversation between Sánchez, Ayuso and Almeida

Another of the symbolic greetings after months of disagreements has been that of Sánchez himself with the president of the Community of Madrid, Isabel Díaz Ayuso, who have had a conversation of several minutes to which the mayor of Madrid, José Luis, joined later Martínez-Almeida. Both Madrid leaders had been very critical of the Executive in recent days, which they have said they are going to ask to put an end to the state of alarm in the nine Madrid cities.

All dressed in the corresponding masks and trying to maintain safety distances, there have also been huddles between different members of the Government with Sánchez’s chief of staff, Iván Redondo, as well as with representatives of the police and military estates.

The highest authorities of the State and the Armed Forces and the presidents of the autonomous communities and the autonomous cities of Ceuta and Melilla have also attended. Only the lehendakari, Iñigo Urkullu and the acting president of the Generalitat de Catalunya, Pere Aragonès, have been missing, although it is common for the highest representatives of these autonomous communities not to attend the events of October 12. In the unusual 2020 edition, the president of Aragon, Javier Lambán, has not been due to illness; and the Balearic Islands, Francina Armengol, for COVID-19.

‘The effort that unites us’ has been the motto chosen this 2020 for this celebration, in reference to the fight against the pandemic and in recognition of all those who have acted and continue to act in their combat. The military act consists simply of a flag raising, a tribute to those who gave their lives for Spain, an imposition of decorations and a small land parade.